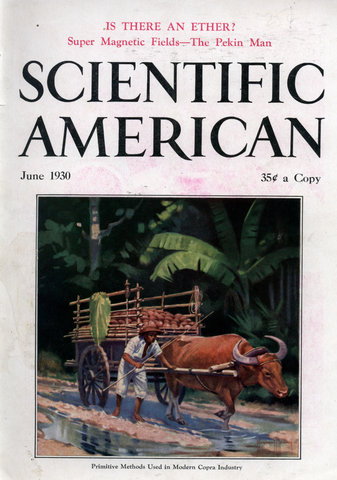 Aid for the Layman Who Attempts to Keep Abreast of the Changing Concepts of the Modern Physicist By PAUL R. HEYL, Ph.D. Physicist, United States Bureau of Standards THE ether had its origin in human need and will last as long as human thinking requires it. Not always in the same form, perhaps, but unchanged in function. The word "ether" comes down to us from the Greeks, but with their concept we have little interest. The "divine ether" to which Prometheus made his impassioned appeal was merely the rarefied upper air. The ether of physics dates from the time of Newton, who, like all the natural philosophers of his day, was greatly-puzzled by the fact of apparent action at a distance.
Color-Harmony Introduces a New Mode of Expression

SINCE Bainbridge Bishop patented his "color organ" in 1877, many artists and inventors have been at work on the creation of an art form of light somewhat similar to the age-old art form of sound-music. In its early stages this pioneer work was greatly hampered by the unfortunate and totally unfounded belief that each color corresponded definitely to a musical note. Now, however, the light artists of later years have come to look at light as an independent medium for esthetic expression no more related to music than to painting or sculpture. Form, color, and motion are the basic factors, according to the theory of Mr. Thomas Wilfred, an artist in light who has developed his dreams into the practical applications which we illus-strate in this article. He has designed a clever keyboard from which lighting of any kind can be controlled with such delicacy as to enable an artist to express himself in form, color, and motion.
Gillette Mach 1

The New Gillette Shave Square blade-ends Easier and safer to handle MOST MEN like fishingâ€”but not fishing down the drainpipe for a slippery razor blade. That’s one of many reasons why a vast army of men are praising the New Gillette Blade. Its square ends can’t slip out of soapy fingers; and how easily the […]
THE HIGHEST PRICED BEARING IN THE WORLD

are on this, the Largest Airplane in the World NO time to think about bearings ... not when the altimeter registers ten thousand feet... not when a hundred trusting passengers are dozing in their seats behind. No time to wish that the bearings had been purchased upon performance rather than upon price... not when the twelve roaring motors on the wing will continue to roar only so long as the bearings stand up ... nor when the twenty-four engine generators are running on them, and lighting dynamo, radio installation and fuel pump depend upon them.