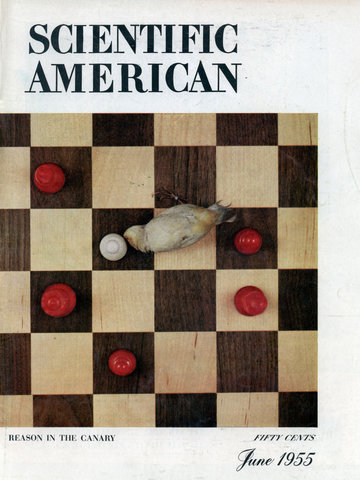 Tributes by Niels Bohr and I. I. Rabi With the death of Albert Einstein, a life in the service of science and humanity which was as rich and fruitful as any in the whole history of our culture has come to an end. Mankind will always be indebted to Einstein for the removal of the obstacles to our outlook which were involved in the primitive notions of absolute space and time. He gave us a world picture with a unity and harmony surpassing the boldest dreams of the past.
Boeing engineers work with superb equipment

This Boeing-designed computer answers in seconds engineering questions that formerly took weeks. It is one of many advanced facilities that help Boeing engineers solve the challenging problems of tomorrow's aviation, and maintain unsurpassed prestige. One out of every seven Boeing employees is an engineer, playing a vital role in designing and developing high-performance airplanes, guided missiles and components of the future. There are varied and truly creative opportunities at Boeing right now for mechanical, electrical, civil and aeronautical engineers, and for mathematicians and applied physicists.
anti-aircraft fire control... AND FORD INSTRUMENT COMPANY

In World War I, anti-aircraft fire against slow, low flying planes, could be managed by optical sighting and correcting from observed air bursts. Today's supersonic planes, flying at great altitudes must be tracked by radar and the guns directed by complex computers.
RCA Recruitment Ad

Past-moving computer advances at RCA call for many more computer engineers. If you have a BS or advanced degree and at least 2 years' design and development experience ... this is your opportunity to team up with RCA scientists whose far-reaching new systems concepts utilize the latest digital techniques to broaden the scope of the electronic data processing field.
What's New in Mnemonics?

The news is that the magnetic-core memory has emerged from the computer laboratory and has been in customer use for approximately a year, passing all tests with flying colors. This new development has been pioneered by Remington Rand with the Univac Scientificâ€”the first installation of a commercially available computer that successfully uses magnetic-core storage.
Scientific American Tries LSD

When the drug called LSD is administered to human subjects, it produces the symptoms of psychosis. The phenomenon provides a remarkable new tool for the investigation of psychotic states by Six Staff Members of Boston Psychopathic Hospital In the spring of 1943 a Swiss chemist, Albert Hofmann, while working with a chemical in his laboratory one day, was overcome by peculiar mental sensations. He became restless, felt disembodied, could not concentrate on his work. Fantastic images of extraordinary plasticity and kaleidoscopic coloring flitted through his mind. In a dreamlike state, he left the laboratory and went home. Correctly connecting his disturbance with the chemical he had been preparing, Hofmann conscientiously recorded every sensation. His description was the beginning of a remarkable series of discoveries.
IBM Ad: KEY TO THE FIRST ALL-TRANSISTOR CALCULATOR OFFERED TO BUSINESS!

Through IBM research, another FIRST for business KEY TO THE FIRST ALL-TRANSISTOR CALCULATOR OFFERED TO BUSINESS! In the IBM 608, tiny transistors are combined with the fantastic “memory” capacity of magnetic cores to give business a data processing machine with significant new advantages. Made without a single vacuum tube, the IBM 608 Transistor Calculator uses […]
COMPUTER MEMORIES

A large mathematical machine must be able to store information and refer to it. This requirement has stimulated the evolution of information-storage units based on various physical effects by Louis N. Ridenour A computing machine capable of solving problems must possess a "memory" or, less poetically, an "information-storage unit." The recent history of improvements in computing machines has been largely a history of improving memory devices. No ideal system has yet been found, but there has been a great deal of progress within the past decade, and several promising new developments are on the horizon.
I tol'em and I tol'em!

Why is it that the gorilla speaking like he’s in a minstrel show? I tol’em and I tol’em! Yes, I did “Being chief engineer on one of these red hot projects ain’t hay and the big gripe is that no matter what goes wrong I can’t fix it. That’s why at the start when the […]