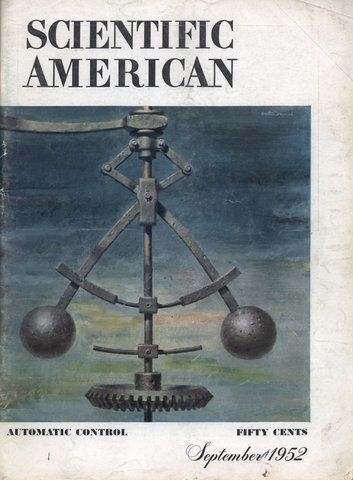 Oct, 1952
Engineering hours turn into minutes when you speed up your data analysis

Yesterday, "impossible"... today, an accomplished fact â€” Now, for the first time, a commercial or industrial firm can have â€” first thing any morning â€” complete facts and figures, analyzed and summarized, on its previous day's performance ... in production, in sales, in procurement or any other major or minor activity. The almost unbelievable feats of Remington Rand Univac in computing, sorting, classifying and reporting business data enable management executives to formulate "fact-powered" decisions in the merest fraction of the time previously required. Also, highly pertinent analyses and forecasts that were never even attempted before, are now easy and almost completely automatic. Univac has cleared the way for phenomenal improvements in the coordination of business facilities.
Ad: Ultrasonic Corp.

“These Theories on Automatic Feedback Control are Interesting…but… When can I use them in my plant?” The answer is: Plans can be started just as quickly as you can phone us or write us. Here at Ultrasonic is a skilled staff already trained in diverse applications of automatic control â€” . . . with many […]
CRYSTAL UREA

takes the stiffness out of ordinary starch Washable summer suits once had to be starched stiff as a board to stay pressed.Then one starch maker found he could produce a far better laundry finishing agent by chemically combining starch with Du Pont Crystal Urea. This new product, called starch carbamate, gives an elegant drape and finish to washable suits, doesn't impact . . . and doesn't close the air space between the fibers, but lets the garment 'breathe" and remain cool. New starch carbamate is also finding applications in other fields as an ingredient in water-base wall paints . . . and as a binder for glass fibers in the molding operation.
Information

The surprising discovery that it is subject to the same statistical treatment as heat facilitates its storage and handling in automatic control systems by Gilbert W. King THE "lifeblood" of automatic control is information. To receive and act on information is the essential function of every control system, from the simplest to the most complex. It follows that to understand and apply automatic control successfully we must understand the nature of information itself. This is not as simple as it may seem. Information, and the communication of it, is a rather subtle affair, and we are only beginning to approach an exact understanding of its elusive attributes.
3 Important, New Electronic Digital Computers

For Engineering, Science and Business Entirely new circuit designs have enabled CRC to produce a complete line of relatively small, low cost, highly reliable, digital electronic computers. They may be purchased outright, or leased with the option to buy. A complete parts and service warranty, including both preventive and special maintenance will be included with lease if desired.
2 Computers? No-Just One

2 Computers? No-Just One IDA! Integro-Differential Analyzer Leading design and research engineers have found that one IDA computer does the work of 2 ordinary computers â€” because of such ahead-of-the-field features as those outlined below: Interchangeable Set-up Boards: permit problem change-over in minutes; thus IDA is always at work, there’s no lost set-up time! 20 […]
An Automatic Machine Tool

Feedback control has begun to advance in the working of metals. Presenting the first account of a milling machine that converts information on punched tape into the contours of a finished part. by William Pease THE metal-cutting industry is one field in which automatic control has been late in arriving. The speed, judgment and especially the flexibility with which a skilled machinist controls his machine tool have not been easily duplicated by automatic machines. Only for mass-production operations such as the making of automobile parts has it been feasible to employ automatic machinery. New developments in feedback control and machine computation, however, are now opening the door to automatization of machine tools built to produce a variety of parts in relatively small quantities. The problem will be clearer if we first review briefly the history of machine tools and their relationship to manufacturing processes. The story begins in the last quarter of the 18th century. Prior to that time the tools of the millwright, as the machinist of that day was called, consisted chiefly of the hammer, chisel and file. His measurements were made with a wooden rule and crude calipers. His materials were prepared either by hand-forging or by rudimentary foundry casting. Crude, hand-powered lathes were already in existence, but they were used only for wood-turning or occasionally for making clock parts.
What's it like to be a Boeing engineer?

Boeing computer? What just the one? Do they all have to share? ::image size=xl::

What's it like to be a Boeing engineer? Boeing engineers enjoy many advantages â€” among them the finest re-search facilities in the industry. These include such advanced aids as the Boeing-designed, Boeing-built Electronic Analog Computer shown above. This is part of the stimulating background that helps Boeing men maintain the leadership and prestige of an Engineering Division that's been growing steadily for 35 years.

RELIABILITY ERA MAGNETIC DRUM STORAGE SYSTEMS Ruggedly designed to rigid specifications, operationally proved by tens of thousands of hours of operation in a variety of applications, ERA Magnetic Drum Storage Systems are fully engineered, operationally reliable systems. Large storage capacity, proven dependability, alterable yet non-volatile storage, and high speed are among the important characteristics which […]
THE ROLE OF THE COMPUTER

The multifarious control loops of a fully automatic factory must be gathered into one big loop. This can best be done by means of a digital computing machine by Louis N. Ridenour IF THE thermostat is a prime elementary example of the principle of automatic control, the computer is its most sophisticated expression. The thermostat and other simple control mechanisms, such as the automatic pilot and engine-governor, are specialized devices limited to a single function. An automatic pilot can control an airplane but would be helpless if faced with the problem of driving a car. Obviously for fully automatic control we must have mechanisms that simulate the generalized abilities of a human being, who can operate the damper on a furnace, drive a car or fly a plane, set a rheostat to control a voltage, work the throttle of an engine, and do many other things besides. The modern computer is the first machine to approach such general abilities. Computer is really an inadequate name for these machines. They are called computers simply because computation is the only significant job that has so far been given to them. The name has somewhat obscured the fact that they are capable of much greater generality. When these machines are applied to automatic control, they will permit a vast extension of the control artâ€” an extension from the use of rather simple specialized control mechanisms, which merely assist a human operator in doing a complicated task, to over-all controllers which will supervise a whole job. They will be able to do so more rapidly, more reliably, more cheaply and with just as much ingenuity as a human operator.
Digital Graph Plotter

THE NEW LOGRING Digital Graph Plotter THE LOGRING DIGITAL GRAPH PLOTTER automatic- ally plots one variable against another algebraically in incremental steps, in response to electrical impulses. It is ideally adapted for use as a read-out device for electronic digital computers, especially digital differential analyzers, and for use in connection with such problems as aircraft […]
FEEDBACK

It is the fundamental principle that underlies all self-regulating systems, not only machines but also the processes of life and the tides of human affairs by Arnold Tustin FOR hundreds of years a few examples of true automatic control systems have been known. A very early one was the arrangement on windmills of a device to keep their sails always facing into the wind. It consisted simply of a miniature windmill which could rotate the whole mill to face in any direction. The small mill's sails were at right angles to the main ones, and whenever the latter faced in the wrong direction, the wind caught the small sails and rotated the mill to the correct position. With steam power came other automatic mechanisms: the engine-governor, and then the steering servo-engine on ships, which operated the rudder in correspondence with movements of the helm. These devices, and a few others such as simple voltage regulators, constituted man's achievement in automatic control up to about 20 years ago.
ANNOUNCING A GENERAL PURPOSE DIGITAL COMPUTER

It seems to me that anyone who would use the phrase “Getting Closer to Infinity” does not really understand the concept of infinity. GETTING CLOSER TO INFINITY Businessmen, engineers, and scientists now are solving problems in scientific and industrial data processing which, a few short years ago, would have been considered well-nigh infinite. IBM Electronic […]
AUTOMATIC CONTROL

An introduction to seven articles about self-regulating machines, which represent a scientific and technological revolution that will powerfully shape the future of man by Ernest Nagel AUTOMATIC CONTROL is not a new thing in the world. Self-regulative mechanisms are an inherent feature of innumerable processes in nature, living and non-living. Men have long recognized the existence of such mechanisms in living forms, although, to be sure, they have often mistaken automatic regulation for the operation of some conscious design or vital force. Even the deliberate construction of self-regulating machines is no innovation: the history of such devices goes back at least several hundred years. Nevertheless, the preacher's weary cry that there is nothing new under the sun is at best a fragment of the truth. The general notion of automatic control may be ancient, but the formulation of its principles is a very recent achievement. And the systematic exploitation of these principlesâ€”their subtle theoretical elaboration and far-reaching practical applicationâ€”must be credited to the 20th century. When human intelligence is disciplined by the analytical methods of modern science, and fortified by modern material resources and techniques, it can transform almost beyond recognition the most familiar aspects of the physical and social scene. There is surely a profound difference between a primitive recognition that some mechanisms are self-regulative while others are not, and the invention of an analytic theory which not only accounts for the gross facts but guides the construction of new types of systems.
Early ad for Asimov's I Robot

For all you us sci-fi nerds out there. YOU are an EARTHMAN.. YOU EXIST IN THAT Exciting INTERPLANETARY WORLD of TOMORROW! Here are the newest and best books on ROBOTS by the publishers of the, most popular novels in Science-Fiction. I ROBOT by Isaac Asimov $2.50 – A truly great book written by one of […]