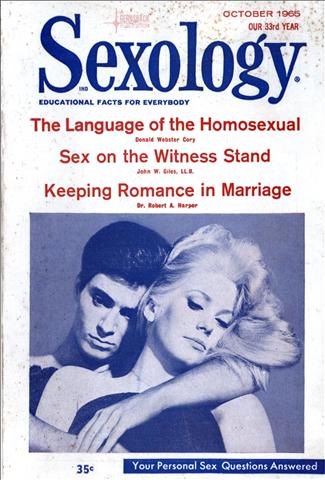 The troth about breast size and fraudulent claims to increase it. by Jon Willand, M.A. A number of sensational magazines carry advertisements promising increased bust size through the use of exercise courses or equipment. Increases in the size of the breasts, rib cage and pectoral (breast) muscles are often promised. These promises must be viewed with caution.
The Pain Seeker

by Clifford Alien, M.D. The bizarre story of the man who gave his name to the sex deviation masochism. The term masochism—the condition wherein pain or humiliation is necessary for sexual satisfaction — was taken from a real person. It has become so lodged in psychology that it has been impossible to displace it by algolagnia (interest in pain) and similar words invented by specialists. What sort of person was this who gave his name to such a deviation? How did it come about?
NEEDED: CIVILIZED ABORTION LAWS

Many voices have been raised recently calling for liberalization of our abortion laws, unchanged since 1803. These include doctors, churchmen, attorneys, newspapers and persons in all walks of life. Some of these have joined together to form the "Association for the Study of Abortion." According to CBS Reports, April 5th, 3000 illegal abortions are performed in the U.S. every day. The majority of these are sought not by single girls seeking to escape the penalty of promiscuity, but by desperate married women who are forced to this unhappy solution because of our restrictive abortion laws.
THE LANGUAGE OF THE Homosexual

Homosexual slang, says this expert, is becoming an important part of our language and literature. by Donald Webster Cory America is a mixture of many types of speech reflecting the cultures and backgrounds of its teeming millions. One type that is widely used, though not given recognition, serves a very important function in the lives of many people. This is the language of the homosexual. There are 2 ways in which homosexual slang is used. The first is when it is employed by the outsider or "straight" individual to describe or refer to homosexuals ar.d their activities. In this way the slang mirrors society's disapproval and permits a person to talk of homosexuals without incurring any guilt by association.