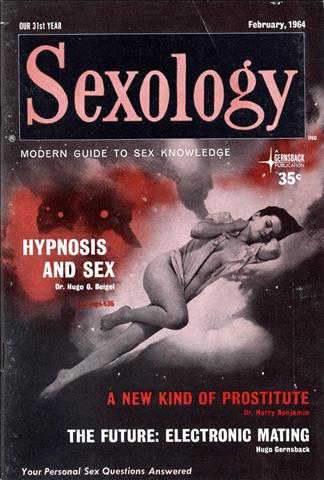 Some of the reasons that make it difficult to change homosexuals by psychotherapy. by Donald Webster Cory and John P. LeRoy. Mr. Cory is the well-known author of "The Homosexual in America" and editor of "Homosexuality: A Cross-Cultural Approach." Mr. LeRoy is a free-lance writer. Amid a tangle of contradictory reports, there is a growing belief that homosexuality can be "cured" and that the homosexual can be changed — if he wants to be.
WHEN THE WIFE SAYS NO!

It is not an easy thing for a typical husband to understand his wife's refusal to permit sexual intercourse. By Helen Branson, M.A. and Ralph Branson, M.A. Mr. and Mrs. Ralph Branson, marriage counselors, are currently employed as staff research interviewers for the Mendota Research Group of Englewood, New Jersey. Many wives create much un-happiness in their marriages because they do not understand the sensitivity of the male ego in relation to sexual refusal.
Should students learn BIRTH CONTROL?

Adults who think that teenagers don't pick up contraceptive information on their own are deceiving themselves. By Isadore Rubin, Ph.D. Dr. Rubin is Managing Editor of this publication. At a recent press conference in Los Angeles, the president of the Planned Parenthood Federation of America, Dr. Alan F. Guttmacher, made nationwide headlines by proposing that older high school students be given instruction in birth-control methods as part of a sex education program.
Hypnosis and Sex

Despite popular belief, a hypnotized person cannot be made to violate his (or her) moral code. By Hugo G. Beigel, Ph.D. Whenever hypnosis is discussed with a layman, one question inevitably comes up: "Can you make your subject do whatever you want?" In posing that question some people think of the crimes which evil characters in cheap thrillers force their victims to commit. Most of them, however, have sex in mind. Women want to know whether they could be taken advantage of. Young men usually mean: "Would a girl undress if I told her it's bed-time?"
The Future: Electronic Mating

A look into the more rational marriage choice of the future, by a science expert on things-to-come. By Hugo Gernsback Marriage still remains man's greatest gamble. The world's divorce rate constantly accelerates at a dizzying rate. Clearly there is something seriously wrong with our customs and our approach to marriage—it cries out for radical reform. People rarely speculate why so many of our most dazzling "sexy" beauties of screen and theater shed husbands like a pair of gloves, and why other famous and exquisitely beautiful women, with the most alluring anatomies, never marry at all.