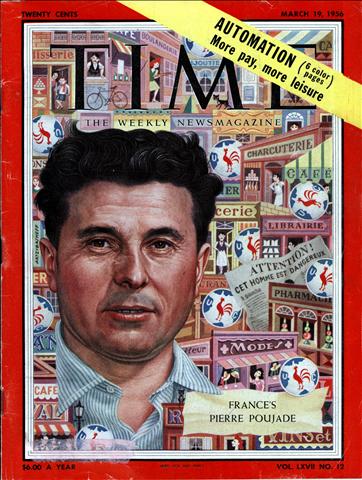 ... to make 5 photo-exact copies of any record for 2-1/2c each. Letters, news clippings, pencil or ink records . . . even carbon and spirit duplicator copies can be reproduced by anyone in your office. No change in your present room lighting! ... to make a translucent "whiteprint master" for 100. No time lost, now, when you wish to produce quantities of blueprints or whiteprints from opaque or two-sided material.
These Burroughs Sensimatic savings can be yours

Robot Machines Are Cutting Costs, Boosting Profits and Making Jobs, Bringing More Leisure to Everyone. THOUGH its history is brief, automation already has its own folklore. One of its most widely told legends concerns C.I.O. President Walter P. Reuther and a Ford executive who were touring Ford's automated engine plant in Cleveland. As they strode past huge self-operating tools that bored cylinder holes, positioned connecting rods and bolted down manifolds, the Ford executive wisecracked: "You know, not one of these machines pays dues to the U.A.W." Retorted Reuther: "And not one of them buys new Ford cars, either."