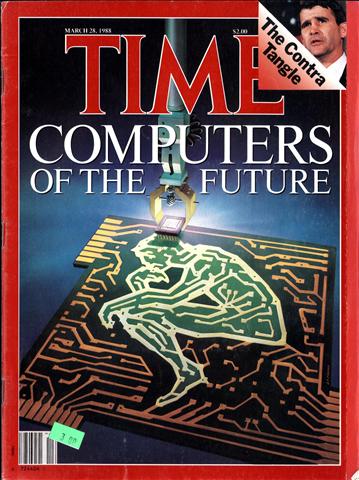 Next Issue:
This is the latest issue we have of this publication.
Just how simple do word processors have to get before you begin using one?

Even simpler than your old typewriter? No problem. Because we've made one that eliminates all the intimidating things you've always associated with word processors.
Fast and Smart - Designers race to build the supercomputers of the future

The computer at the University of Illinois is simulating something that no one saw: the evolution of the universe in the aftermath of the Big Bang. Re-creating conditions that may have prevailed billions of years ago, the computer reveals on a remote screen how massive clouds of subatomic particles, tugged by their own gravity, might have coalesced into filaments and flattened disks. The vivid reds, greens and blues of the shapes are not merely decorative but represent the various densities of the first large structures as they emerged from primordial chaos in the near vacuum of space.
Mobil Political Ad: A platform in search of a candidate

Many a political pundit has noted that people generally vote their pocketbooks. They tend to elect the candidates they believe capable of steering the nation toward better times—more jobs, a higher standard of living, and the achievement of both personal aspirations and national goals. Now, in the midst of the presidential campaign, we're listing some points that are often overlooked in all the speechmaking, but bear directly on America's economic health—a platform in search of a candidate, so to speak. In a nonpartisan spirit, and with profound respect, we urge that the next President:
The Little Network That Might

Fox is still around after a year, stumbling but scrappy Well, no one ever said starting a fourth network would be easy. The Fox Broadcasting Co., Rupert Murdoch's ambitious effort to compete with abc, cbs and nbc, has weathered enough tin-pot tragedies in its brief life to fill a month on Another World. Joan Rivers' much publicized attempt to challenge Johnny Carson with her own talk show ended in ignominious cancellation after seven months on the air.