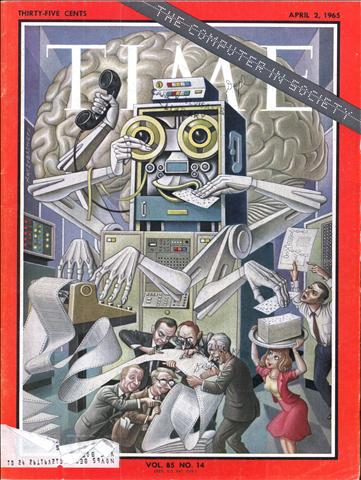 When vital business information is tardy, something or someone usually suffers. Production is slowed up. A customer has to wait. A decision is delayed. Remedy: Bell System Data-Phone* service. Connected with the business machine-virtually any type â€”it converts data (from punched cards or tapes) into a special "tone" language and transmits it over the same nationwide telephone network you use for voice communications.
The Cybernated Generation

Purring like contented kittens, the most remarkable support crew ever assembled kept unceasing vigil last week as Gemini spun through space with its two passengers. At Cape Kennedy and at the space complex in Houston, at Goddard Space Flight Center in Maryland and at 14 other sites from the Canary Islands to the South Indian Ocean, dozens of electronic computers guided, watched, advised and occasionally admonished the two astronauts. In fact, the Space Age's first orbiting digital computer, a hatbox-sized model that can make 7,000 separate calculations a second; went along for the ride in Gemini. No space effortâ€”American or Russianâ€”had ever before made such extensive use of the computer, or depended more on it.
Zenith Handcrafted TVs

This ad pretty much sums up why there are no more American television manufacturers. They are actually advertising the fact that they don’t use circuit boards and that all of their electronics are hand assembled! BUILT BETTER… to last longer! Every Zenith portable TV is Handcrafted â€”built better to last longer. There are no printed […]