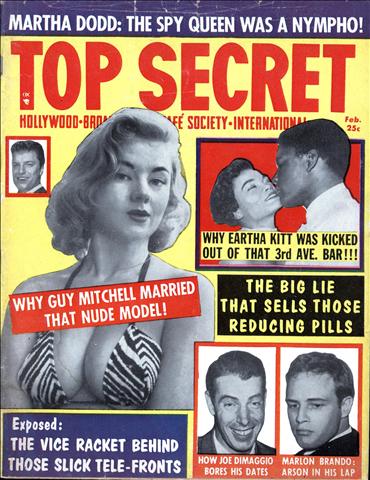 Revealed for the first time—the biggest secret in the torrid life of Martha Dodd, the Reds' Mata Hari in the U.S. By JOHN LEWIS CARVER IN THE FALL of 1950, a short, cleanshaven, ebullient man had dinner behind closed doors in a Moscow office and while he was munching the excellent meal suddenly realized that this could very well become his last supper. In the midst of pleasantries he abruptly felt the cold gust of death breathing down his spine.
HOW E-Z MONEY CAN K-O YOU!

Cut-throat moneylenders, charging up to 1000% interest, drive cornered debtors into crime . . . BY GENE TAYLOR "DO YOU NEED CASH?" the bright neons ask with a cold glare. "It's E-Z!" You can get money in the most unlikely places today, but you'd better beware, brother! You're buying trouble with that "personalized small loan" whether you get it over or under the counter. You were broke when you started after it. But you may end up with broken limbs, or even dead in the gutter! Maybe you've been unusually lucky and the day you need a loan is still to come. But, whatever the exact time, odds are you will borrow money at intervals throughout your life!
What Are Those Nurses Doing in Mexico's Bawdy Houses?

The latest gimmick of the vice peddlers south of the border are pretty angels of mercy to lure tourists to safer sin . . . By HOYT McAFFE VICE TRAFFICKERS in Juarez — aided and abetted by Mexican officials — recently hit upon a new gimmick to promote sex and prostitution in that red-hot border town. Their purpose was to reduce a soaring VD rate and induce the thousands of GI's and American thrill-seekers who flock there weekly to feel "safer." They assigned trim, young, uniformed, trained nurses to the swarming beehive-type houses of prostitution in Juarez!
Wired for Sin - THE VICE RACKET BEHIND THOSE PHONE ANSWERING SERVICES

Bigtown call girls operate freely because slick tele-fronts handle their incoming calls By JACK MITCHELL THE TALL, sleeky-dressed blonde got off the hotel elevator and made her way swiftly across the lobby to the telephone booths. Tossing aside a mink stole from her shapely shoulders, she took pencil and notebook from her pocketbook, dialed a number and said softly: "This is June. Any calls?"
The Andy Gard Home Voice Recorder

IT'S NEW! IT'S REVOLUTIONARY! IT'S ELECTRONIC! A NEW FASCINATING RECORDING HOBBY Only $14.95 NOW! FOR THE FIRST TIME! You can cut your own records in the privacy of your own home! If you now have a phonograph, send for this extra recording equipment for some of the most enjoyable moments of your life. Put your voice on records, or Dad's or Mom's, or your friend's. Make a recording of baby sister or brother and save it for posterity. Have fun at parties, or in the classroom.
UNMASKED: THE GREAT REDUCING PILL GYP!

Doctors warn that "the most widely promoted medical fraud of today" is a "menace to public health" BY JAMES SHAWCROSS STEVE ALLEN, video's versatile funnyman, can be mighty witty on the screen and he can also be a dud at times. But the worst egg he ever laid wasn't on TV. He did it, with an assist from his beauteous missus, in a so-called "paid endorsement," lending his famous name to plug an infamous product, a spurious "reducing candy." According to a high-priced, nationwide ad that starred the famous couple, "Mr. and Mrs. Steve Allen lose weight together with AYDS!... Jayne: 'And lose weight automatically!' . . . Steve: 'Triple check!'"