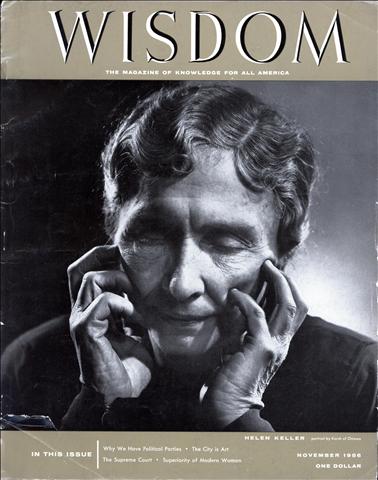 Next Issue:
This is the latest issue we have of this publication.
The City - Design for Living

by Lewis Mumford The city as a purely physical fact has been subject to numerous investigations. But what is the city as a social institution? The earlier answers to these questions, in Aristotle, Plato and the Utopian writers from Sir Thomas More to Robert Owen have been on the whole more satisfactory than those of the more systematic sociologists. Most contemporary treatises on "urban sociology" in America throw no important light upon the problem.
TV - A PROSPECTUS

by Louis Kronenberger Two phenomena a half century apart have exercised the greatest influence on 20th-century Americans as social animals. The first was the arrival of the automobile which, aside from its more practical aspects, stimulated all America to move about, whether five miles to a picture show, 25 to a bathing beach, 50 for the sake of driving or 200 to call on Grandma. With the coming of the automobile there took place in the strictest sense a social revolution.
THE Superiority of MODERN WOMAN

More and more women have invaded fields from which their supposed physical, mental or psychological limitations once barred them. With increasing opportunities and a formidable record of success in competition with men, women are now laying claim not only to equality but even to superiority. By recognizing the fields of their superiority, women can attain their proper place in society and perform vital functions for the benefit of mankind in this no-longer-a-man's world.
YOUR LIFE TEN YEARS FROM TODAY

During the next 10 years the world will see changes dramatic as those introduced by the industrial revolution. Technicological progress will be equal in this period to that of any previous five decades, and in its wake will come new problems. If man can foresee and meet these challenges, our way of life in 10 years could be amazingly different. by Leo Cherne The progress of these next 10 years will be as dramatic, as filled with change, as jampacked with impact for American business in the total American community as any 50 years in the entire development of civilized man.