Scientific American
Issue: Nov, 1928
Posted in: Sign of the Times
No Comments on It Reknits Hosiery (Nov, 1928) 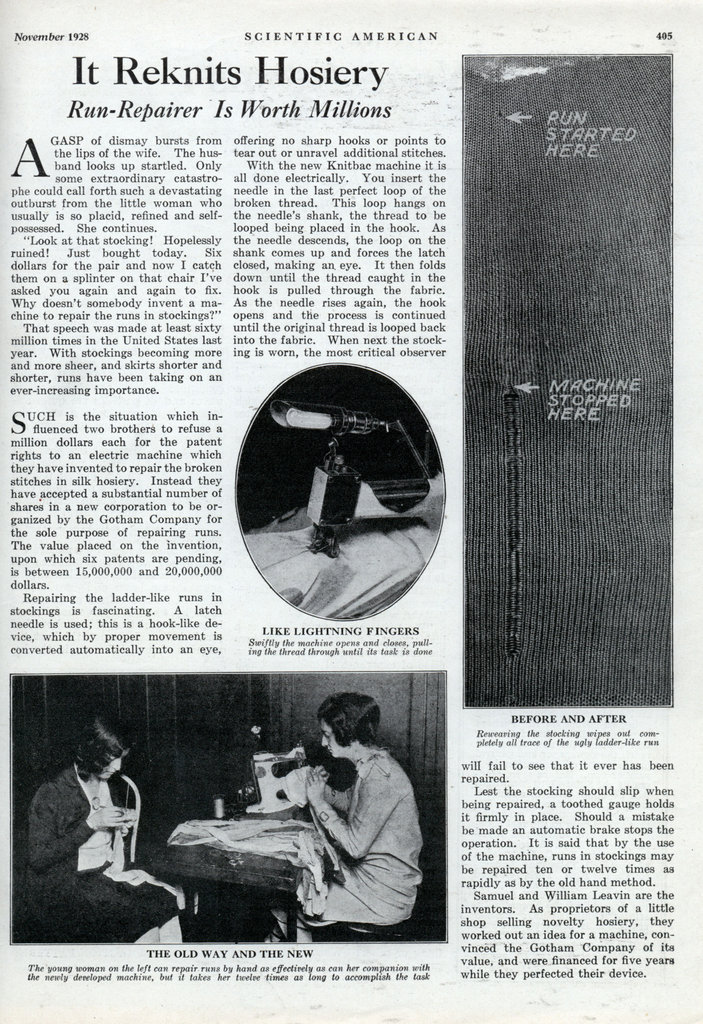 GASP of dismay bursts from the lips of the wife. The husband looks up startled. Only-some extraordinary catastrophe could call forth such a devastating outburst from the little woman who usually is so placid, refined and self-possessed. She continues.

“Look at that stocking! Hopelessly ruined! Just bought today. Six dollars for the pair and now I catch them on a splinter on that chair I’ve asked you again and again to fix. Why doesn’t somebody invent a machine to repair the runs in stockings?” That speech was made at least sixty million times in the United States last year. With stockings becoming more and more sheer, and skirts shorter and shorter, runs have been taking on an ever-increasing importance.

SUCH is the situation which influenced two brothers to refuse a million dollars each for the patent rights to an electric machine which they have invented to repair the broken stitches in silk hosiery. Instead they have accepted a substantial number of shares in a new corporation to be organized by the Gotham Company for the sole purpose of repairing runs. The value placed on the invention, upon which six patents are pending, is between 15,000,000 and 20,000,000 dollars.

Repairing the ladder-like runs in stockings is fascinating. A latch needle is used; this is a hook-like device, which by proper movement is converted automatically into an eye, offering no sharp hooks or points to tear out or unravel additional stitches. With the new Knitbac machine it is all done electrically. You insert the needle in the last perfect loop of the broken thread. This loop hangs on the needle’s shank, the thread to be looped being placed in the hook. As the needle descends, the loop on the shank comes up and forces the latch closed, making an. eye. It then folds down until the thread caught in the hook is pulled through the fabric. As the needle rises again, the hook opens and the process is continued until the original thread is looped back into the fabric. When next the stocking is worn, the most critical observer will fail to see that it ever has been repaired.

Lest the stocking should slip when being repaired, a toothed gauge holds it firmly in place. Should a mistake be made an automatic brake stops the operation. It is said that by the use of the machine, runs in stockings may be repaired ten or twelve times as rapidly as by the old hand method.

Samuel and William Leavin are the inventors. As proprietors of a little shop selling novelty hosiery, they worked out an idea for a machine, convinced the Gotham Company of its value, and were financed for five years while they perfected their device.