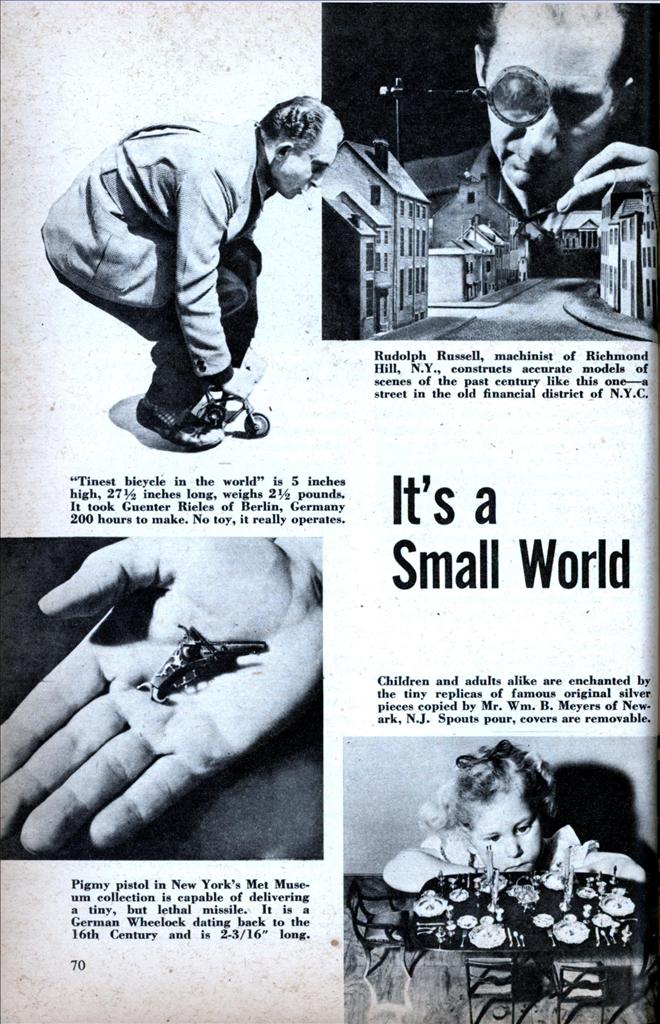 Pigmy pistol in New York’s Met Museum collection is capable of delivering a tiny, but lethal missile. It is a German Wheelock dating back to the 16th Century and is 2-3/16″ long.

Rudolph Russell, machinist of Richmond 1 Hill, N.Y., constructs accurate models of scenes of the past century like this one—a street in the old financial district of N.Y.C.

Children and adults alike are enchanted by the tiny replicas of famous original silver.] pieces copied by Mr. Wm. B. Meyers of New- ] ark, N.J. Spouts pour, covers are removable.

This garden-in-minature blooms in an ordinary coat button. The dwarf cactus plants have been set into a shallow layer of sand and bits of peat moss, require little water.

Smallest bible in collection of the American Bible Society is just as complete as their largest, also shown. Bertha Manny, Society’s secretary, reads it with a magnifying glass.

This nickel-sized pocket watch from a. collection of Frank Jensen dates back to the turn of the century and drew much attention to its wearer. The big one is a wall clock.

Lawrence T. Gieringer, Hamburg, Pa., proudly displays the town he built himself. Switch on hand organ turns on the music from the loudspeaker concealed inside little hotel.