I saw Bob Barker on the cover of a tabloid at the grocery store last night and it reminded me that I had this article scanned. 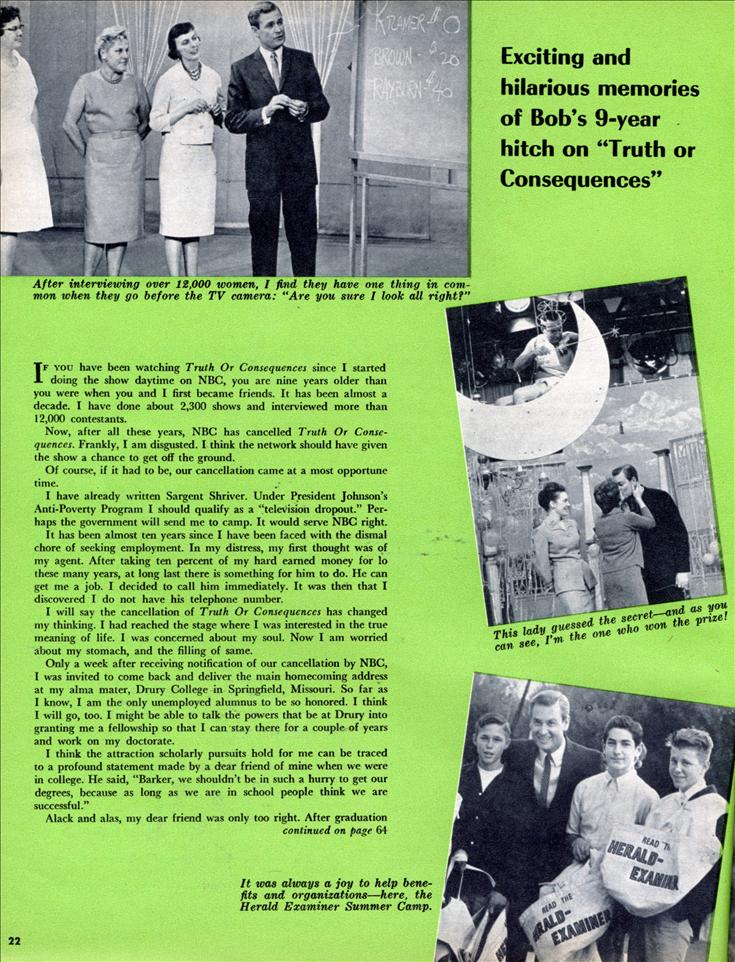 If you have been watching Truth Or Consequences since I started doing the show daytime on NBC, you are nine years older than you were when you and I first became friends. It has been almost a decade. I have done about 2,300 shows and interviewed more than 12,000 contestants.

Now, after all these years, NBC has cancelled Truth Or Consequences. Frankly, I am disgusted. I think the network should have given the show a chance to get off the ground.

Of course, if it had to be, our cancellation came at a most opportune time.

I have already written Sargent Shriver. Under President Johnson’s Anti-Poverty Program I should qualify as a “television dropout.” Perhaps the government will send me to camp. It would serve NBC right.

It has been almost ten years since I have been faced with the dismal chore of seeking employment. In my distress, my first thought was of my agent. After taking ten percent of my hard earned money for lo these many years, at long last there is something for him to do. He can get me a job. I decided to call him immediately. It was then that I discovered I do not have his telephone number.

I will say the cancellation of Truth Or Consequences has changed my thinking. I had reached the stage where I was interested in the true meaning of life. I was concerned about my soul. Now I am worried about my stomach, and the filling of same.

Only a week after receiving notification of our cancellation by NBC, I was invited to come back and deliver the main homecoming address at my alma mater, Drury College in Springfield, Missouri. So far as I know, I am the only unemployed alumnus to be so honored. I think I will go, too. I might be able to talk the powers that be at Drury into granting me a fellowship so that I can stay there for a couple of years and work on my doctorate.

I think the attraction scholarly pursuits hold for me can be traced to a profound statement made by a dear friend of mine when we were in college. He said, “Barker, we shouldn’t be in such a hurry to get our degrees, because as long as we are in school people think we are successful.”

Alack and alas, my dear friend was only too right. After graduation he went on to become a complete failure.

I could go on and on about this great American tragedy, the cancellation of Truth Or Consequences. But, the editors of Lady’s Circle have asked me to recount a couple of my more memorable moments during the nine years I emceed the show.

Their request is a little like asking Napoleon what he liked most about the Battle of Waterloo.

But, I am determined to be brave. I shall fulfill the editors’ request for “memorable moments.”

Let me assure you that when you work with unrehearsed contestants thirty minutes every day, Monday through Friday, you can count on plenty of surprises. But, my biggest surprise involved a contestant who wasn’t there.

I went up into the audience before this particular show and selected a lady for a stunt. We went on the air, and when it came time for the stunt in question I asked for a curtain to be opened, expecting to find the lady I had selected from the audience. But, my colleagues on the show had made other arrangements. When the curtain was opened there stood my own mother whom I thought was back in Missouri. The guys on the show had decided that it would be a nice surprise to have her flown out to California.

I was surprised all right. At first I didn’t realize she was my mother. I thought she was my father.

One day we had arranged a very elaborate reunion of a wife with a soldier husband who had been overseas for many months.

As I explained our plans to the viewers and the studio audience the lights in our studio were to be extinguished one by one in a very dramatic buildup to the moment when the wife would arrive.

Ah, the best laid plans of NBC lighting directors sometimes go awry. When he hit the first switch not one light went out, not two, not three, but every light we had was doused in one fell swoop. Not only that, the technicians could not get the lights back on, not even one little light.

Later I got a letter from a lady who said, “Bob, I think you do your best work in the dark.”

After every Truth Or Consequences telecast I found myself wondering what would happen tomorrow. Perhaps that is why I liked emceeing the show so much.

Actually, there is only one thing that really concerns me about having the show go off the air. I am worried about Ralph Edwards’ reaction. You see, Ralph who is the owner of Truth Or Consequences auditioned countless masters of ceremonies for the show before he decided to give me the job. Now, after only nine years, we are cancelled. Do you suppose Ralph will think he picked the wrong man?