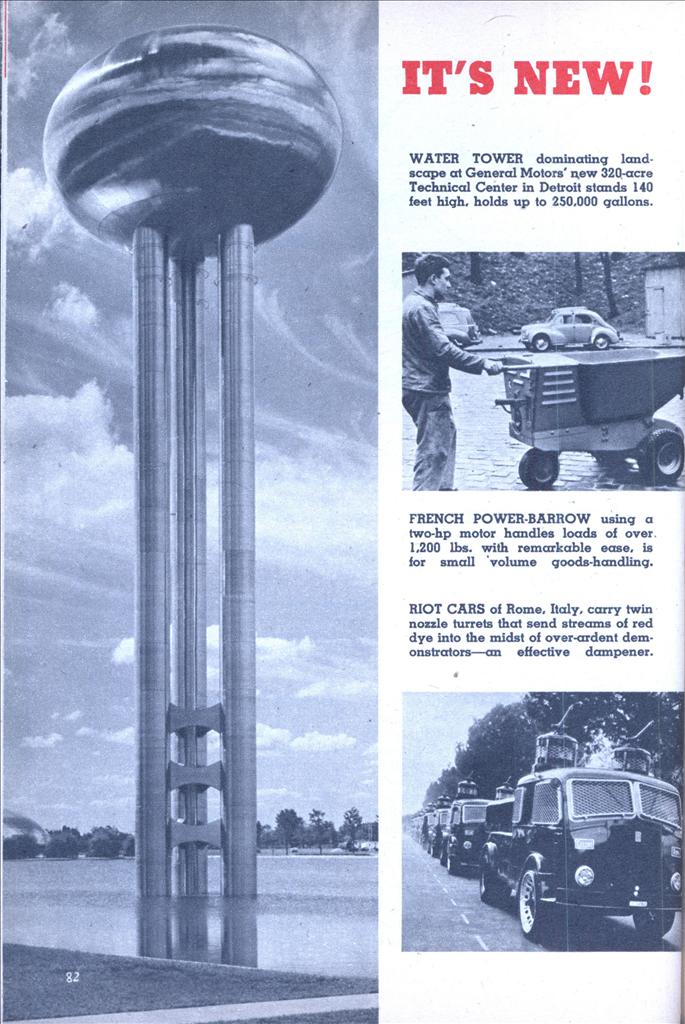 FRENCH POWER-BARROW using a two-hp motor handles loads of over. 1,200 lbs. with remarkable ease, is for small volume goods-handling.

GRASSHOPPER WEATHER STATION for use in the Antarctic is fully automatic, radios its own weather reports back to a manned base. Fabricated of light aluminum, the device has legs that right it no matter how it lands after being parachuted from plane. The legs and a 25-foot antenna are controlled by automatic tuning mechanism inside.

SOLAR BARBEQUE by Kaiser Aluminum and Chemical reflects sunrays, builds up enough heat to bake a cake or a roast but won’t work in gray or rainy weather.

RCAF SABREJET with locked nosewheel came to a safe stop after sliding in on a strip of fire extinguisher foam sprayed on field by a quick-thinking operations officer.

PAPER MAIL SACK with Fiberglas mesh never has to be shipped back empty. Disposable sacks are now cutting shipping costs on routes to extracontinental possessions.

SAPPHIRE HEADS of Presidents past and present took H. B. Derian (left) two years apiece to cut are worth $250,000 each. Admiring them: Navy Secretary Thomas.

RUSSIAN BOXING GLOVES used by USSR team in Britain look like a cross between an outfielder’s glove and a ping-pong paddle. Pugilist is I. V. Ogorenko, team’s trainer.

CALIFORNIA PREFAB so struck the fancy of USSR housing experts that they ordered a duplicate, together with furniture, to be sent to Moscow. Total cost: $12,000.

PLASTIC FEMALE tells all over recording machine as visitors to Boston Museum of Science peer into her interior. Aluminum-boned figure hails from Cologne, Germany.

JET STRATOLINER, the Boeing 707, is the first Yank jet passenger job to get off the ground, will soon be in service. Display model seems to make young woman happy.