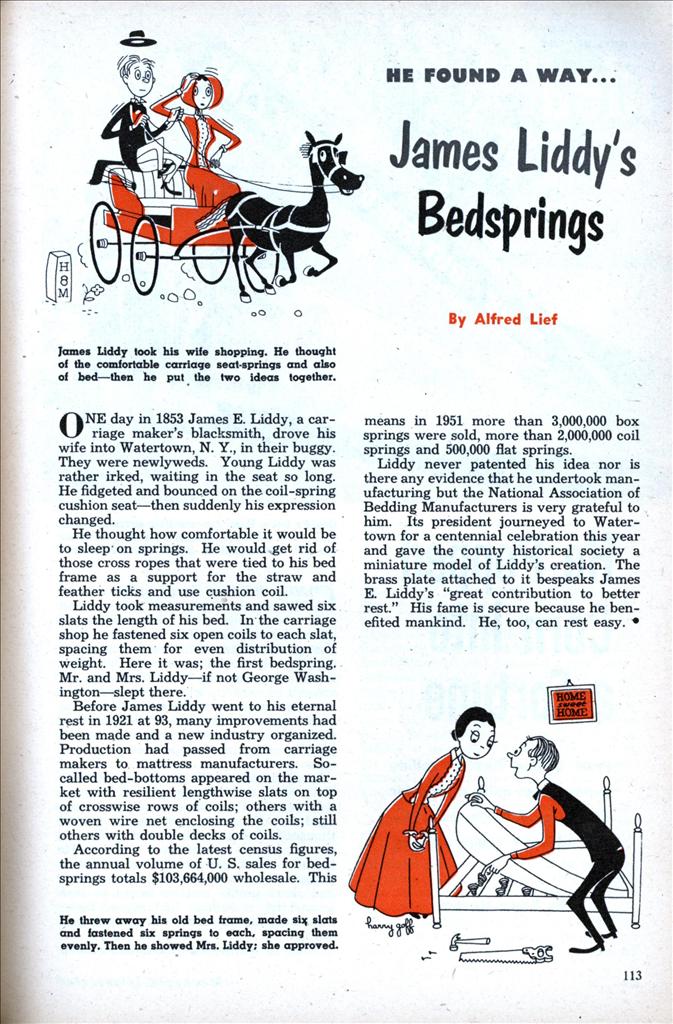 ONE day in 1853 James E. Liddy, a carriage maker’s blacksmith, drove his wife into Watertown, N. Y., in their buggy. They were newlyweds. Young Liddy was rather irked, waiting in the seat so long. He fidgeted and bounced on the coil-spring cushion seat—then suddenly his expression changed.

He thought how comfortable it would be to sleep on springs. He would get rid of those cross ropes that were tied to his bed frame as a support for the straw and feather ticks and use cushion coil.

Liddy took measurements and sawed six slats the length of his bed. In the carriage shop he fastened six open coils to each slat, spacing them for even distribution of weight. Here it was; the first bedspring. Mr. and Mrs. Liddy—if not George Washington—slept there.

Before James Liddy went to his eternal rest in 1921 at 93, many improvements had been made and a new industry organized. Production had passed from carriage makers to mattress manufacturers. So-called bed-bottoms appeared on the market with resilient lengthwise slats on top of crosswise rows of coils; others with a woven wire net enclosing the coils; still others with double decks of coils.

Liddy never patented his idea nor is there any evidence that he undertook manufacturing but the National Association of Bedding Manufacturers is very grateful to him. Its president journeyed to Water-town for a centennial celebration this year and gave the county historical society a miniature model of Liddy’s creation. The brass plate attached to it bespeaks James E. Liddy’s “great contribution to better rest.” His fame is secure because he benefited mankind. He, too, can rest easy. *