Wow, this is just the beginning of Toyota’s reemergence after WWII. According to the blurb they only made about 2700 cars a year. Currently they are the second largest car company in the world and produce close to ten million cars a year. That car is actually kinda snazzy, it reminds me of a mashup of a BMW (the grille) and Beetle (the body). 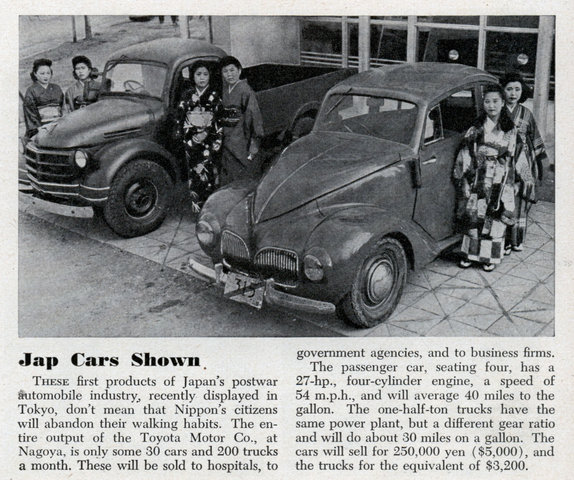 Jap Cars Shown
These first products of Japan’s postwar Automobile industry, recently displayed in Tokyo, don’t mean that Nippon’s citizens will abandon their walking habits. The entire output of the Toyota Motor Co., at Nagoya, is only some 30 cars and 200 trucks a month. These will be sold to hospitals, to government agencies, and to business firms. The passenger car, seating four, has a 27-hp., four-cylinder engine, a speed of 54 m.p.h., and will average 40 miles to the gallon. The one-half-ton trucks have the same power plant, but a different gear ratio and will do about 30 miles on a gallon. The cars will sell for 250,000 yen ($5,000), and the trucks for the equivalent of $3,200.