I guess the kamikazes weren’t such a surprise then. 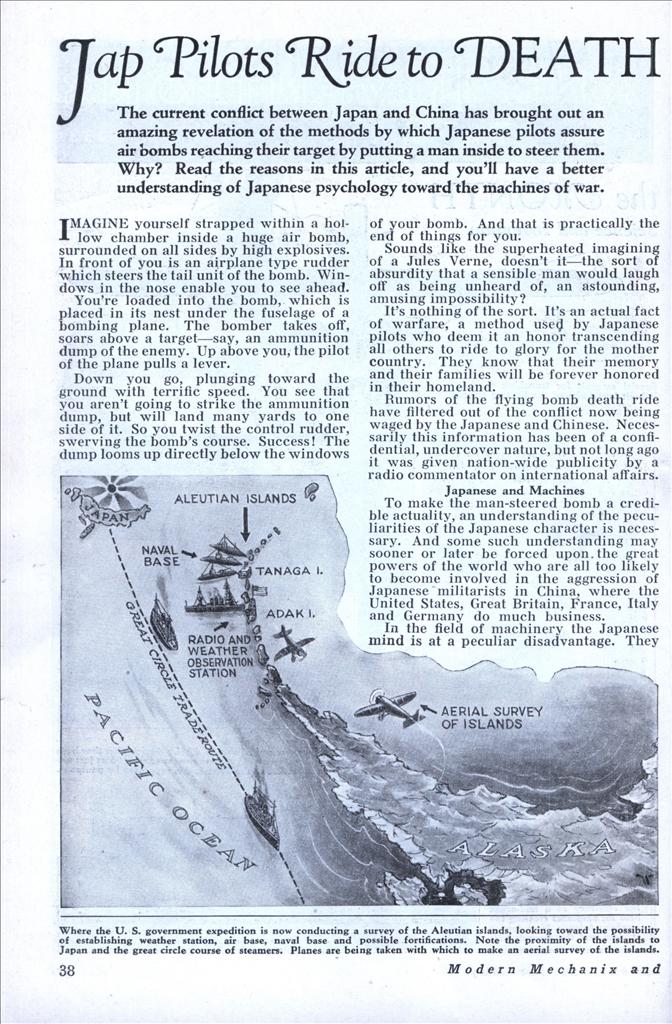 The current conflict between Japan and China has brought out an amazing revelation of the methods by which Japanese pilots assure air bombs reaching their target by putting a man inside to steer them. Why? Read the reasons in this article, and you’ll have a better understanding of Japanese psychology toward the machines of war.

IMAGINE yourself strapped within a hollow chamber inside a huge air bomb, surrounded on all sides by high explosives. In front of you is an airplane type rudder which steers the tail unit of the bomb. Windows in the nose enable you to see ahead. You’re loaded into the bomb, which is placed in its nest under the fuselage of a bombing plane. The bomber takes off, soars above a target—say, an ammunition dump of the enemy. Up above you, the pilot of the plane pulls a lever.

Down you go, plunging toward the ground with terrific speed. You see that you aren’t going to strike the ammunition dump, but will land many yards to one side of it. So you twist the control rudder, swerving the bomb’s course. Success! The dump looms up directly below the windows of your bomb. And that is practically the end of things for you.

Sounds like the superheated imagining of a Jules Verne, doesn’t it—the sort of absurdity that a sensible man would laugh off as being unheard of, an astounding, amusing impossibility?

It’s nothing of the sort. It’s an actual fact of warfare, a method used by Japanese pilots who deem it an honor transcending all others to ride to glory for the mother country. They know that their memory and their families will be forever honored in their homeland.

Rumors of the flying bomb death ride have filtered out of the conflict now being waged by the Japanese and Chinese. Necessarily this information has been of a confidential, undercover nature, but not long ago it was given nation-wide publicity by a radio commentator on international affairs.

Japanese and Machines To make the man-steered bomb a credible actuality, an understanding of the peculiarities of the Japanese character is necessary. And some such understanding may sooner or later be forced upon, the great powers of the world who are all too likely to become involved in the aggression of Japanese militarists in China, where the United States, Great Britain, France, Italy and Germany do much business.

In the field of machinery the Japanese mind is at a peculiar disadvantage. They 1 are able to turn out an exact copy of any mechanism that comes into their hands, but the type of mechanical imagination which went into its original creation—which, for want of a better term, is sometimes known as Yankee ingenuity—they are at a loss to duplicate.

The simple truth of the matter is that -a man is practically required to steer Japanese bombs to their mark because they haven’t been able to develop the bomb-sighting machinery which makes Uncle Sam’s flyers, for instance, so deadly in their accuracy.

Peculiar Oriental Psychology As to why Japanese soldiers fight among themselves for the honor of being the bomb pilot who can look forward to being blown to certain oblivion, that’s a matter of psychology not so easy to understand. Patriotism rules the Japanese to an almost fanatical degree, and love of country is so bound up with religion—the emperor being regarded as an incarnate god—that to be blown up in a bomb to further the successes of Nippon becomes something to be desired above all things.

When one understands the popularity that hara-kiri, a form of suicide by self-disembowelment, has had among the Japanese for centuries, the national willingness to dive to death in a bomb, or in any other way, becomes credible.

Hara-kiri, as formerly practiced, was compulsory upon a noble of the higher class Who received a courteously phrased message from the mikado intimating that he must die for some offense of lawbreaking or disloyalty. The suicide, using a jeweled dagger customarily sent by the mikado for performing the act, proceeded in a prescribed ritual. Seated on a dais, surrounded by officials and friends, the suicide plunged the dagger into his stomach below the waist on the left side, drew it slowly across to the right, and turning it, gave a slight cut upward.

This compulsory suicide has been abolished, but the idea has such a striking appeal for the Japanese imagination that some 1500 hara-kiris take place annually as a purely voluntary gesture.

In the final analysis, the amazing thing is not that the Japanese should succeed in finding pilots for their man-bombs, for volunteers for such a mission of certain death can be found in any army in the world, but that such a weapon should be necessary. It simmers down to the fact, as hinted at above, that the Nipponese are conscious of their inferiority in developing new and fearful weapons of war, and are forced to rely on man-power.

A country like the United States would approach the problem of directing bomb flight in an entirely different way. Some method of mechanical control of the bomb would be sought—in fact, the idea of controlling a bomb or gun shell by radio is already being worked on, as described in Modern Mechanix and Inventions some months ago. It will be seen that, entirely aside from making the sacrifice of a man’s life unnecessary, radio control of a bomb is much more accurate and less liable to error through the failure of the human machine in a moment of critical nervous tension.

Superiority of American engineering brains over the Oriental variety is well demonstrated in the newest United States army bombing plane, a photograph of which is reproduced in these pages. It is a monoplane of all-metal construction—no wood or fabric to catch fire from incendiary bullets of the enemy—and is so well streamlined, with its landing gear pulled up under its belly, that it can do a top speed of 200 miles an hour, fully loaded with a two ton cargo of bombs. This is 80 miles an hour better than the speed of the Curtiss bomber, a biplane, previously used by the air corps.

Features of U. S. Bomber A revolving turret to protect the gunner in the nose of the ship is another feature. It diverts the rush of air and makes accurate aiming much easier. At high speeds, the windstream is so powerful that, in an ordinary ship, it has a tendency to wrench a swivel mounted gun out of the gunner’s control.

In connection with the possible need of protecting our country from Pacific aggression, the news that a government expedition has just left for an extensive survey of the Aleutian islands (which constitute the tip of the Alaskan peninsula) is important. A map, reproduced herewith, shows the extremely important location of these islands in their relation to Japan and the Orient.

Geologically, these islands are thought to be the sunken peaks of land that once connected the mainland with Asia. Siberia is but a stone’s throw distant, and the northern islands of Japan not much farther away. Since, by a recent bill passed in Congress, the United States has relinquished control of the Philippine islands, we will have no Pacific base of importance other than Hawaii and Guam, which makes the Aleutian chain all the more important in the scheme of national protection.

Strategic Importance of Islands Airplanes are being carried by the expedition and these will make a careful aerial survey of the islands. A weather observation station will probably be established on Tanago or Adak island, and the best suited of the nearby islands will be chosen as a possible base for an airplane field. Harbor facilities will be carefully charted with a view to possible installation of a naval base for ships and submarines. Alaska, of course, is a United States possession which we are free to fortify as we may see fit. An incident of the World War which has just come to light illustrates the ingenuity of the western mind in the world of machines. German engineers designed a mine fitted with clockwork which permitted the device to float in toward English shores when the tide was right. When the tide ebbed, the mine automatically sank to the bottom, where it waited the proper interval and then released itself again to float closer to the shore. The British were unable to figure out how the mines got there.