Man, you should have seen the Mormon Meteor go! The Jumping Jew and the Leaping Lutheran never had a chance. 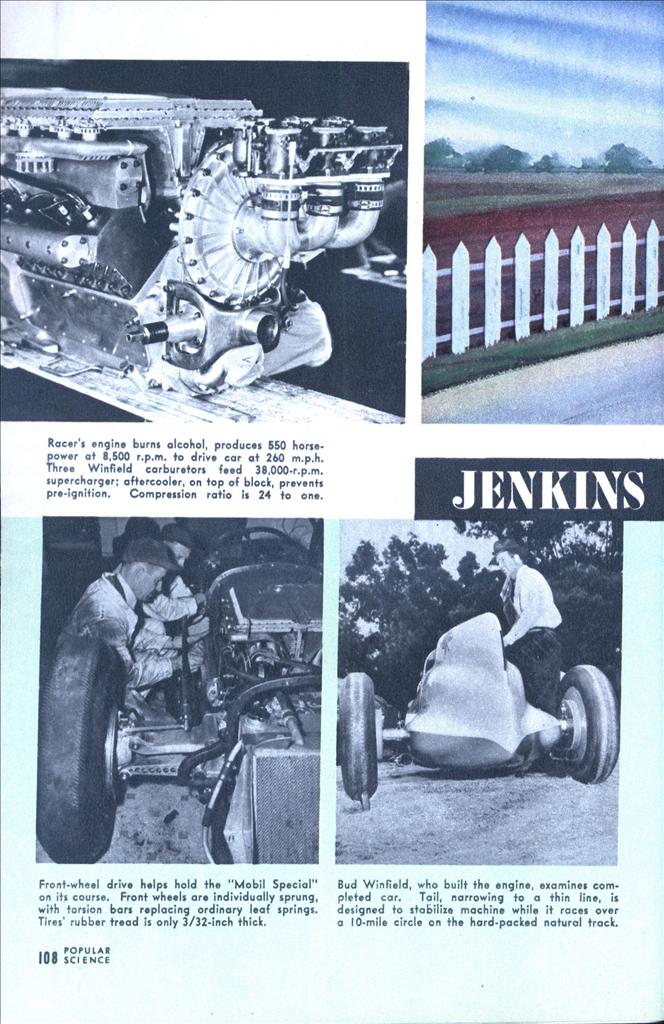 Bud Winfield, who built the engine, examines completed car. Tail, narrowing to a thin line, is designed to stabilize machine while it races over a 10-mile circle on the hard-packed natural track.

Front view of racer, above, emphasizes its ground-hugging design. It is only 36 inches high, including canopy. Jenkins’s previous car —the “Mormon Meteor,” which did 3,868.14 miles in 24 hours—was 2-1/2 times as large, weighing 4,800 pounds. Jenkins has two relief drivers for tests: his son, Marv, and Ralph Hepburn, who used this chassis with a different engine at Indianapolis in the Labor Day races.

With this 1,900-pound package of power, Ab Jenkins hopes to cover 4,000 miles or more in 24-hour runs on Bonneville salt flats, Utah. Out to crack all his former speed records for distances of 500 miles and up, the veteran driver is shown * here beside his new racer and (inset) in its tiny cockpit, with plastic canopy and simplified instrument panel.

Below is car’s completed chassis, ready for the body. Air scoop extends out over radiator and oil cooler. The oil used is standard S.A.E. #50, instead of the castor oil that usually lubricates high-speed power plants. The 470-pound, V-8 engine has sterling-silver connecting-rod bearings with thermocouples at important points; a dashboard selector switch permits driver to read temperatures instantly. Water injection, up to 20 percent, is employed for greater power.