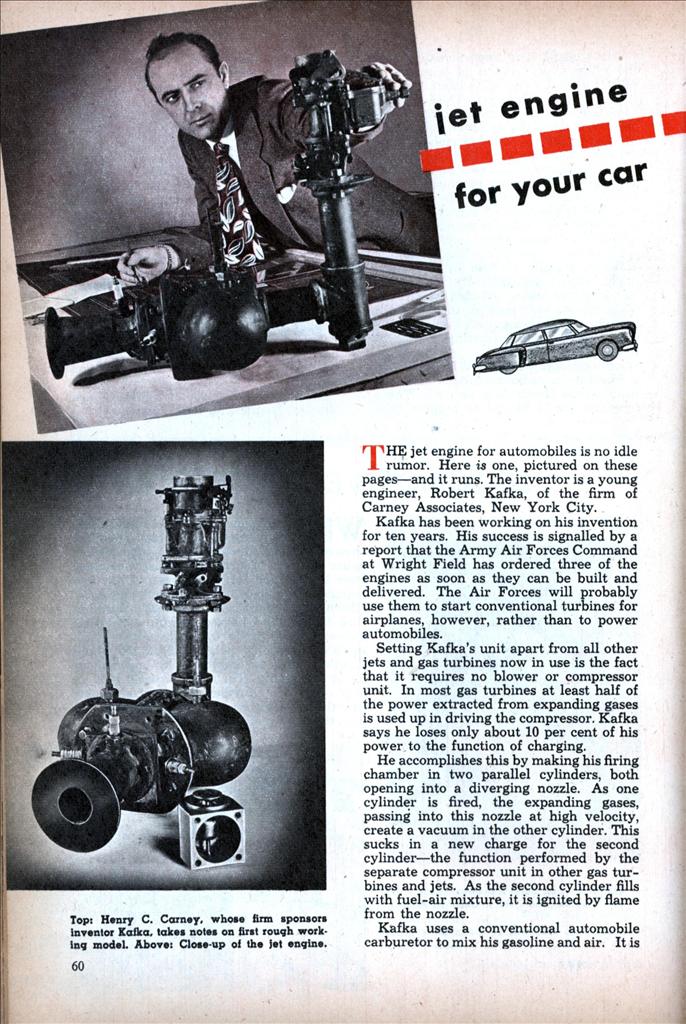 Jet Engine For Your Car

THE jet engine for automobiles is no idle rumor. Here is one, pictured on these pages—and it runs. The inventor is a young engineer, Robert Kafka, of the firm of Carney Associates, New York City.

Kafka has been working on his invention for ten years. His success is signalled by a report that the Army Air Forces Command at Wright Field has ordered three of the engines as soon as they can be built and delivered. The Air Forces will probably use them to start conventional turbines for airplanes, however, rather than to power automobiles.

Setting Kafka’s unit apart from all other jets and gas turbines now in use is the fact that it requires no blower or compressor unit. In most gas turbines at least half of the power extracted from expanding gases is used up in driving the compressor. Kafka says he loses only about 10 per cent of his power to the function of charging.

He accomplishes this by making his firing chamber in two parallel cylinders, both opening into a diverging nozzle. As one cylinder is fired, the expanding gases, passing into this nozzle at high velocity, create a vacuum in the other cylinder. This sucks in a new charge for the second cylinder—the function performed by the separate compressor unit in other gas turbines and jets. As the second cylinder fills with fuel-air mixture, it is ignited by flame from the nozzle.

Kafka uses a conventional automobile carburetor to mix his gasoline and air. It is drawn into each cylinder through a valve, and these are the only moving parts of his machine. The throttle gives him complete control of speed, another feature of his invention that is of great importance.

The Kafka basic nozzle works by induction. The firing chamber draws the fresh charge into the opposing chamber with a powerful^ force which measures as a static vacuum of as high as 15 inches of mercury or about seven and one-half pounds per square inch under atmospheric pressure, as tested in the Carney laboratory.

There has been considerable speculation as to the efficiency of this effect. It is an established fact that the efficiency of an injector (whose principles apply here) is effected by the difference in masses of the fluids involved. Thus, if the driving fluid is light (as with steam) and the driven fluid is heavy (as with water), the efficiency of the injector will then be low, but when the two fluids are of the same mass with properly designed orifices, the efficiency will be high. This has been borne out in laboratory tests.

At this stage, Kafka is completely satisfied as to the principle of his invention. It works. He is now building a new, more compact model, with a different valve arrangement. It is not the alternating combustion principle that has given him trouble, but the problem of making the valves work smoothly.

Of course, the purpose of this, like other jets and gas turbines, is to create power more economically. It has long been recognized that the gas turbine holds promise of the cheapest power. Incidental problems have prevented full realization of these potential power sources. Fairly efficient gas turbines are now at work, here and in Europe, and many engineers are giving full time to perfecting them.

Kafka says he has theoretically a motor of 50 lbs. weight that can deliver 100-hp. His first model is much heavier than this, in proportion, but the weight is not there from necessity but for convenience in building it by hand. In a three-hour run his twin-cylinder jet used about a quart of gasoline. It was running at three cycles-per-second, that is, three explosions from each cylinder, which is very ‘ slow. He expects his new model to operate at 30 cycles-per-second.

This new kind of jet power differs from others in that the power comes in pulsations rather than being continuous. Kafka says it sounds like a motorcycle. To smooth out this flow of power, he visualizes several jet units acting on a common shaft with impulses synchronized, like the firing of multiple-cylinder internal combustion motors.

For use as the motor of an automobile, Kafka pictures four jet units, mounted at equal distances around the front side of a disk about the size of an ordinary flywheel. The thrust of these jets would spin the disk with a pinwheel action.

Sufficient power could be generated in this way, he says, but the wheel would have to turn at very high velocity, requiring reduction gears. So Kafka does not stop at this point. He carries the nozzle ends of the jet units through the disk, and here they discharge against turbine blades. Thus he gets a combination of straight jet power and gas-turbine power.

It is in such a set-up that he visualizes an automobile power unit of efficiency far surpassing any internal combustion motor. Forty to fifty miles-per-gallon on kerosene is a very conservative estimate, he thinks. He has used gasoline in his experimental models, but says a lower grade fuel would suffice, as in other gas turbines.

Starting the Kafka jet is a simple matter. All that is required is a small blower that can be operated from the car’s battery. A spark plug in the nozzle gives the initial explosion, and then the two firing chambers take over.

Henry C. Carney, president of Carney Associates, has great confidence in Kafka’s invention. He took the young engineer under his wing over a year ago after a thorough study of the working model.