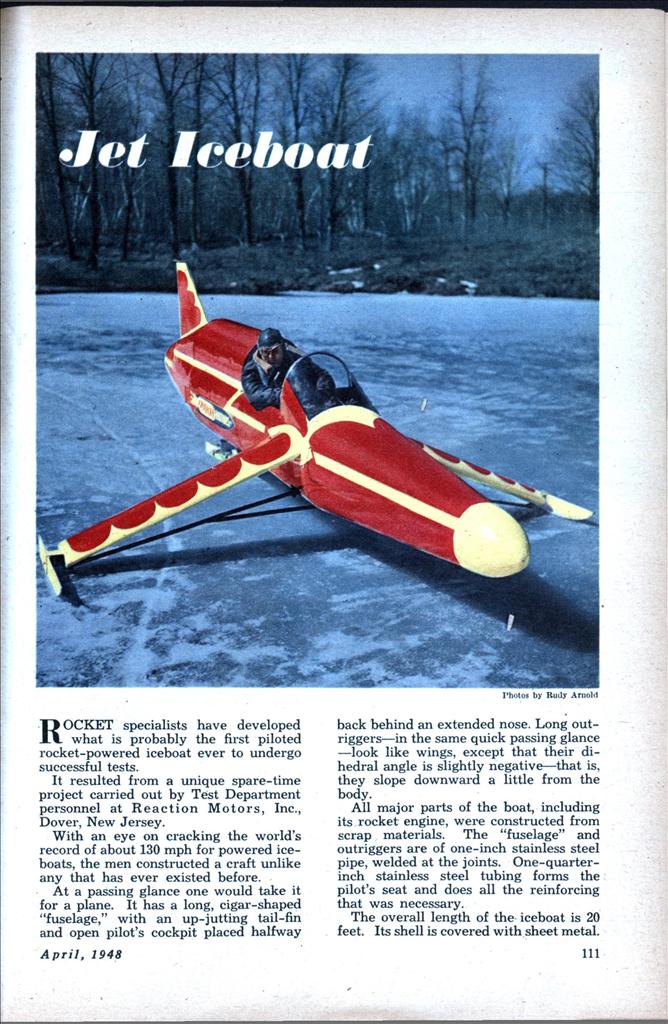 ROCKET specialists have developed what is probably the first piloted rocket-powered iceboat ever to undergo successful tests.

It resulted from a unique spare-time project carried out by Test Department personnel at Reaction Motors, Inc., Dover, New Jersey.

With an eye on cracking the world’s record of about 130 mph for powered iceboats, the men constructed a craft unlike any that has ever existed before.

At a passing glance one would take it for a plane. It has a long, cigar-shaped “fuselage,” with an up-jutting tail-fin and open pilot’s cockpit placed halfway back behind an extended nose. Long outriggers—in the same quick passing glance —look like wings, except that their dihedral angle is slightly negative—that is, they slope downward a little from the body.

All major parts of the boat, including its rocket engine, were constructed from scrap materials. The “fuselage” and outriggers are of one-inch stainless steel pipe, welded at the joints. One-quarter-inch stainless steel tubing forms the pilot’s seat and does all the reinforcing that was necessary.

The overall length of the iceboat is 20 feet. Its shell is covered with sheet metal.

Control is maintained by a wheel in the cockpit which connects by cable to the rear runner. Each of the three runners is three-and-a-half feet long and has a 45-degree blade angle.

Total weight of the craft, including the pilot, reaches 1,600 pounds.

The tanks containing the propellants are placed behind the cockpit, and a nitrogen bottle for pressurizing them is located in the boat’s nose. Sufficient propellant is carried to permit motor operation for about three minutes.

The boat was tested at Lake Hopatcong, New Jersey. Rough ice and drifted snow prevented the test operator from keeping the rocket motor in operation for runs longer than 18 seconds—but, even so, a speed of 95 mph was recorded on the air- speed indicator. Inclement weather and poor ice conditions prevented a run to attempt to break the world’s record.

The craft was designed to reach a speed of 200 mph. It is quite possible that with some redesigning, speeds well over that figure can be realized in a long run on smooth ice.