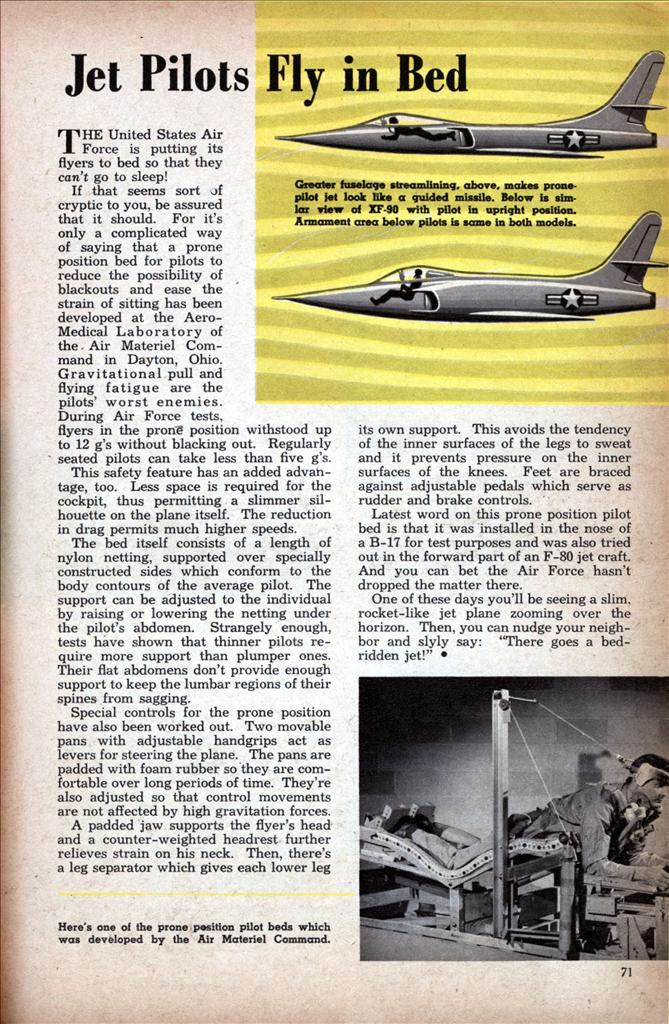 THE United States Air Force is putting its flyers to bed so that they can’t go to sleep!

If that seems sort of cryptic to you, be assured that it should. For it’s only a complicated way of saying that a prone position bed for pilots to reduce the possibility of blackouts and ease the strain of sitting has been developed at the Aero-Medical Laboratory of the – Air Materiel Command in Dayton, Ohio. Gravitational pull and flying fatigue are the pilots’ worst enemies. During Air Force tests, flyers in the prone position withstood up to 12 g’s without blacking out. Regularly seated pilots can take less than five g’s.

This safety feature has an added advantage, too. Less space is required for the cockpit, thus permitting a slimmer silhouette on the plane itself. The reduction in drag permits much higher speeds.

The bed itself consists of a length of nylon netting, supported over specially constructed sides which conform to the body contours of the average pilot. The support can be adjusted to the individual by raising or lowering the netting under the pilot’s abdomen. Strangely enough, tests have shown that thinner pilots require more support than plumper ones. Their flat abdomens don’t provide enough support to keep the lumbar regions of their spines from sagging.

Special controls for the prone position have also been worked out. Two movable pans with adjustable handgrips act as levers for steering the plane. The pans are padded with foam rubber so they are comfortable over long periods of time. They’re also adjusted so that control movements are not affected by high gravitation forces.

A padded jaw supports the flyer’s head and a counter-weighted headrest further relieves strain on his neck. Then, there’s a leg separator which gives each lower leg its own support. This avoids the tendency of the inner surfaces of the legs to sweat and it prevents pressure on the inner surfaces of the knees. Feet are braced against adjustable pedals which serve as rudder and brake controls.

Latest word on this prone position pilot bed is that it was installed in the nose of a B-17 for test purposes and was also tried out in the forward part of an F-80 jet craft. And you can bet the Air Force hasn’t dropped the matter there.

One of these days you’ll be seeing a slim, rocket-like jet plane zooming over the horizon. Then, you can nudge your neighbor and slyly say: “There goes a bedridden jet!” •