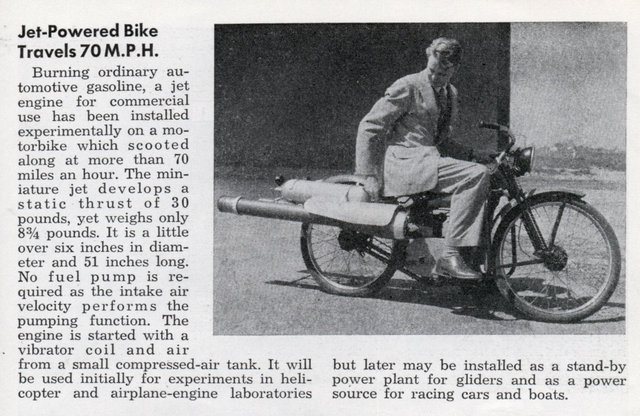 Jet-Powered Bike Travels 70 M.P.H.
Burning ordinary automotive gasoline, a jet engine for commercial use has been installed experimentally on a motorbike which scooted along at more than 70 miles an hour. The miniature jet develops a static thrust of 30 pounds, yet weighs only 8-3/4 pounds. It is a little over six inches in diameter and 51 inches long. No fuel pump is required as the intake air velocity performs the pumping function. The engine is started with a vibrator coil and air from a small compressed-air tank. It will be used initially for experiments in helicopter and airplane-engine laboratories
but later may be installed as a stand-by power plant for gliders and as a power source for racing cars and boats.