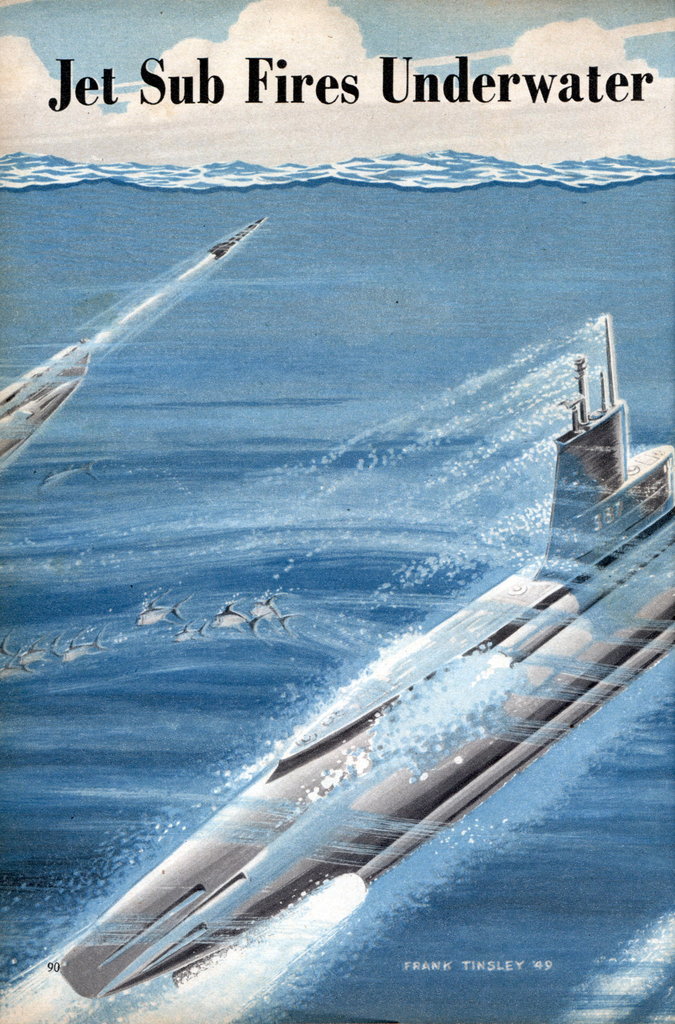 In the closing days of World War II, Germany’s designers brought the U-boat to an unparalleled level of efficiency. Harried by the success of allied aircraft and radar, they came up with a series of radically new developments that threatened to wipe out our sea-borne supply lines. Looted from captured Dutch pigboat bases, the “snorkel” air breathing apparatus permitted swastika killers to cruise underwater and fight undetected without having to come up for air.

The powerful Walther hydrogen-peroxide gas turbine went a step farther, promising phenomenal underwater speeds with no air intake required at all! V-2 missiles were being readied by the Germans for sub-surface launching in a campaign to bombard New York and other key coastal cities.

Right now, obscured by the hubbub of atomic bomb publicity, a quiet but deadly race for underwater military supremacy is being run by Russian and American scientists. For when the Nazi machine finally folded and Russian divisions flooded eastern Germany, most of Hitler’s experimental U-boat stations fell into their hands. The loot included a whole fleet of brand-new, high-speed snorkel subs and most important—the U-boat built to test the Walther gas turbine!

Of course, our own science squads were on the job, too. collaring their share of research data. Our navy had already captured copies of the snorkel and today we are’ converting a score or more of our big fleet submarines into up-to-date air breathing models called the Guppy.

Our navy’s best brains have been concentrating on the problems of advanced submarine design and anti-submarine devices and tactics. In our internal battle between offense and defence, first one side and then the other pulls ahead. To counter the snorkel’s improved speed, we’re building fast surface cruisers—7000 ton killers, designed especially for U-boat fighting.

The sub-offense boys retort by coating their periscopes and snorkel tubes with antiradar “paint.” a substance which reduces the reflection of radar waves. Then our electronics experts come up with more delicate radar sets which pick up tinier targets at greater ranges.

Gas turbines cut down an undersea boat’s engine noise. However, new and more sensitive sonar devices have been developed which are housed beneath the cruiser’s hull in streamlined domes and “ping’ the slightest sounds. And to help out even more, the “MAD” (Magnetic Airborne Detector) is lowered from blimps and helicopters to help spot the subs. So. the race zigzags on.

One of the newest and most startling developments is the simplified, chemical jet engine devised by Dr. Fritz Zwicky, California Institute of Technology physicist and rocket expert. It works on the same principle as the ramjet. As the submarine moves forward, sea water rams into an intake opening at the bow. It is conducted aft to the engine through a long tube and a wetting agent is added on the way. This amplifies the chemical reaction which takes place a moment later in the combustion chamber of the engine, breaking down the water into highly expansive hydrogen gas. This gas is expelled rearward through a standard jet nozzle, thus driving the vessel forward.

The exact fuel to be used is still a deep secret and Naval Intelligence has clamped a tight gag on the Aerojet Engineering Corporation, where the model is being developed. Any competent chemist, however, can name a string of propellents that react when brought into contact with water. The list includes metallic potassium, sodium, white phosphorus and various metallic hydrides, some of which can be carried in regular submarine fuel tanks in liquid form. A power plant of this type is almost ideal for torpedoes and, in a slightly revised form, for airless submarine propulsion.

Adding these features together, we can get a pretty good picture of the future undersea warship. The atomic, power plant would be the final answer to the submariner’s prayer but unfortunately it’s still several years off.

On these pages, we’ve planned a sub, confining ourselves to what actually can be built tomorrow. That means a chemical engine, either of the German Walther or Caltech Zwicky type, with the latter preferred. For practical operation, the simple, forward-propelling ramjet is not enough. Our future sub must be highly maneuverable so a second set of ramjets is necessary. Also, our ship requires plenty of electric power to operate its various devices. This should be generated as a byproduct of the main engines. Consequently, we must add a turbine-driven generator to each engine and step up its capacity. Also a generous bank of high efficiency storage batteries.

Thus we find ourselves with a double-ended twin power plant. Just inside the water inlet on each side of the bow is a Zwicky reaction turbine which ejects its jet forward to reverse the submarine. A long water pipe connects this with a similar rear-facing engine which supplies the vessel’s forward power. Either turbine can be reversed and driven electrically to act as a booster water pump for the other unit. The chemical fuel is carried in ship length tanks set between the power plants and inside the pressure hull. If necessary, auxiliary tanks may be situated in the outer hull spaces not needed for buoyancy.

The elimination of the big diesel and electric engine rooms shortens the vessel to a little over 200 feet—about, a third shorter than our current fleet submarines. This will make it more maneuverable and save on fuel.

For anti-sub action, she’s armed with six torpedo tubes at each end, and equipped with all the latest detection and fire control apparatus.

For coastal bombardment, she carries three V-2-sized guided missiles in a horizontal launching tube on either side of the superstructure. Built into the outer hull, just below the deck line, the tubes occupy little usable space and create almost no increase in hull drag.

They are fitted with internal rails to guide the missiles and a rear opening to vent launching blasts. The missiles are discharged just below the surface after trimming the boat to the desired bearing and firing angle. When empty, they can be sealed to provide additional buoyancy.

The streamlined deck and superstructure resemble the Guppy’s. The conning tower is fitted with the usual retractable periscope, radio and radar equipment, plus a more compact snorkel. Due to the compactness of the power plant, there’s more room for crew accommodations. This is important because there’ll be very long stretches of under -surface cruising.

How would these jet subs stack up against Russia’s new models? Only time or the advent of a shooting war can tell.

However, if such a catastrophe should come about, Americans can rely on one overwhelming advantage that has nothing to do with electronics—a training system and a corps of veteran submarine commanders that are the best in the world!