Popular Mechanics
Issue: Sep, 1948
Posted in: Aviation, Sign of the Times
No Comments on JETS LOOK FOR JOBS (Sep, 1948) 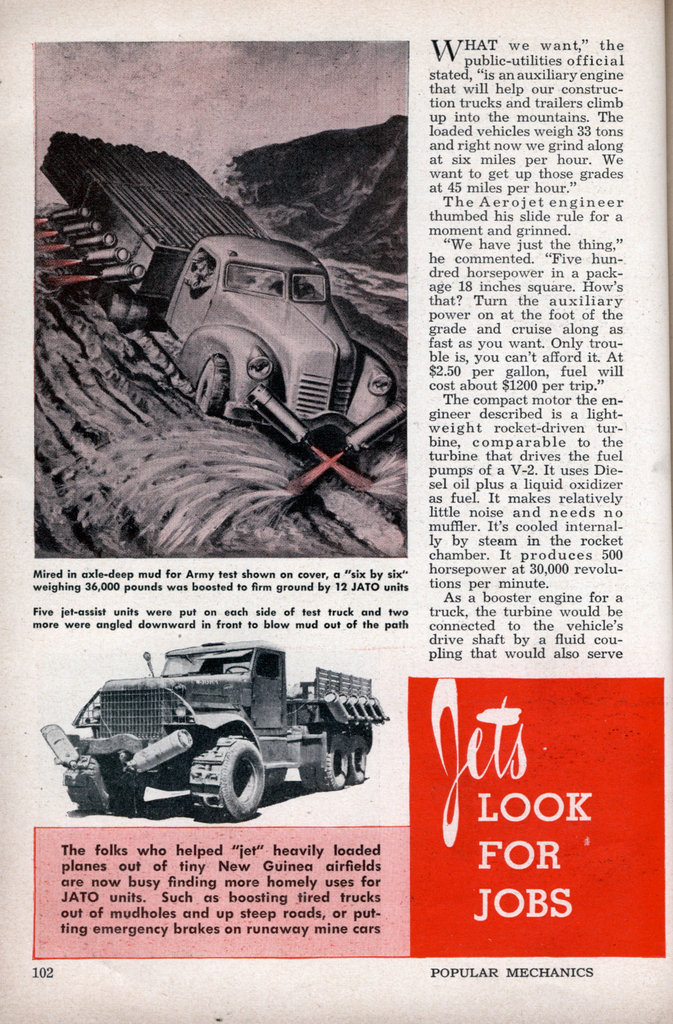 WHAT we want,” the public-utilities official stated, “is an auxiliary engine that will help our construction trucks and trailers climb up into the mountains. The loaded vehicles weigh 33 tons and right now we grind along at six miles per hour. We want to get up those grades at 45 miles per hour.”

The Aerojet engineer thumbed his slide rule for a moment and grinned.

“We have just the thing,” he commented. “Five hundred horsepower in a package 18 inches square. How’s that? Turn the auxiliary power on at the foot of the grade and cruise along as fast as you want. Only trouble is, you can’t afford it. At $2.50 per gallon, fuel will cost about $1200 per trip.”

The compact motor the engineer described is a lightweight rocket-driven turbine, comparable to the turbine that drives the fuel pumps of a V-2. It uses Diesel oil plus a liquid oxidizer as fuel. It makes relatively little noise and needs no muffler. It’s cooled internally by steam in the rocket chamber. It produces 500 horsepower at 30,000 revolutions per minute.

As a booster engine for a truck, the turbine would be connected to the vehicle’s drive shaft by a fluid coupling that would also serve as a gear-reduction device. The idea is entirely practical, except for two thingsâ€”the present high cost of the oxidizer and the size of the tanks that would be needed.

Emergency rocket brakes for runaway mine cars, rocket-powered posthole diggers, rocket-driven surfboards for lifeguards, rocket-type remote-control fire extinguishers; all these, plus the auxiliary rocket engine for trucks, are among the unique ideas that have sprung out of research in rockets, guided missiles and gas-turbine studies.

Looking into the future, Aerojet Engineering Corporation of Azusa, Calif., has been giving serious study to some of these ideas. Dr. F. Zwicky, Dr. Theodore von Karman, and other scientists on the staff know that a device that seems worthless today may suddenly become important and practical tomorrow. Aerojet, a subsidiary of The General Tire & Rubber Company, manufactures jet-assisted take-off units in various sizes. It built the Navy’s Aerobee sounding rocket that recently climbed 80 miles into the stratosphere.

Aerojet’s JATO units are standard equipment for helping heavy aircraft up into the air from small fields. The units shorten the take-off runs of jet aircraft and assist very heavily loaded planes in getting off runways at high-altitude airports. When mounted under the fuselage with the nozzle faced forward a JATO becomes a powerful emergency brake. A BT-13 has been stopped in 112 feet from a touch-down speed of 85 miles per hour by means of rocket brakes alone. It is calculated that a rocket exerting a reverse thrust of 54,000 pounds would slow a DC-4 from 111 to 56 miles per hour in no more than 307 feet.

When Aerojet was asked to design an emergency brake for the cars that carry miners up and down steep inclines it came up with a governor-controlled rocket brake that would act automatically if the car’s cable happened to snap. For a loaded car of 10,000 pounds on a 30-percent incline, the emergency brake would consist of six standard 1000-pound-thrust JATO units secured to the lower end of the car, each fitted with an elbow nozzle pointing downgrade. With a protective bulkhead the installation would weigh 1500 pounds. It would be set to operate automatically at any time the car attained a speed of 26 feet per second. The blast from the rockets would bring the loaded car to a stop after 7.6 seconds of deceleration, after which grip brakes would clamp onto the rails to hold the car in place.

The traditional task of a rocket motor is to propel something through the air, but Aerojet’s Doctor Zwicky points out that there are four media through which a vehicle may be propelledâ€”vacuum, air, water or the earth. Rockets have conquered each medium including the earth.

A rocket-driven ram for digging post-holes sounds silly when you reflect that one man with a shovel can dig a hole in a few minutes. Under some military circumstances, however, the rocket ram might be desirable and the idea has been tried out experimentally. A steel rod with a JATO unit attached to its top is planted in the ground, then the JATO is fired. The thrust forces the rod downward into the earth.

The ram may have real merit as a tool for prospecting for oil deposits under coastal waters. Here the problem is to bury an explosive charge deep in the ocean bottom so that shock waves reflected from underground strata may be recorded by seismic instruments. The present technique is to explode the charge underwater, but geophysicists would prefer actually to bury the charge in the subterranean mud. Rocket rams already have been used for taking cores from ocean bottoms and the oil-prospecting companies expect to test them for this new use as well.

The Coast Guard has been thinking about using rockets to help launch rescue craft through heavy surf, and a small rocket attached to a surfboard has been suggested for lifeguards who need speed in getting out to help a drowning person.

Any time a speedboat enthusiast wants to try for a new unlimited world record for power boats, Aerojet is ready to furnish a power plant with which all existing marks could be smashed. All that is needed now is a suitable hull. The motors themselves would cost only a fraction of the price of conventional power plants.

Engineers estimate that three 1000-pound-thrust JATO units firing through the stern would drive the boat at a speed of 172 miles per hour over a one-mile course. One motor, of 12-seconds duration, would be fired first to accelerate the boat to high speed from a standing start, then the other pair of motors, each of 30-seconds duration, would be ignited to drive the boat across the measured mile. More rockets would provide even greater speed. John Cobb, incidentally, could have added another 20 or 30 miles of speed to his automobile record of 400 miles per hour at Bonneville salt flats last year if he had attached one rocket motor weighing 200 pounds to the tail of his car.

Once the Army posed a unique question: Suppose a heavy vehicle is stuck in the mud. It can’t haul itself out and no towing apparatus is available. Could rockets lick the problem?

Aerojet had to try it to find out, and the answer was an unqualified “yes.” A six-ton “six by six” loaded to 36,000 pounds gross weight and equipped with track-type mud cleats was driven into a mudhole so deep and slippery that the driver couldn’t move his vehicle. The rear wheels spun futilely each time he applied the power.

When the driver pressed the firing button there was a terrific roar and a blast of smoke and the truck literally shot out of the mudhole onto dry ground.

That’s an expensive way to rescue a truck, of course, but it might pay off in some circumstances. One suggestion concerns the heavily loaded cementing trucks or well-survey trucks used in the oil fields. Rockets might prove to be a cheap way of extricating such a truck, stuck in boggy ground, in cases where a rush schedule must be observed.

An idea that is very intriguing to rocket men is to use them as fire extinguishers. What they envision is a rocket fuel that would produce a large percentage of carbon dioxide, an effective fire-quenching agent, in its combustion gases. Present fuels produce some carbon dioxide, but not enough to kill a persistent fire.

A fire-extinguishing rocket unit, of course, would have to be securely fastened in place. It could be operated either by remote control or by means of an automatic heat switch. A blast diffuser, too, would have to be attached in front of the nozzle to cut down the rush of combustion gases which otherwise might scatter the fire. If the right chemical fuel is found, rocket extinguishers may become practical.

Fuel, in fact, is the principal bugaboo of rocket development. There are various combinations of chemicals that produce the necessary thrust of gases but the objection is that the fuels are expensive and are consumed at a prodigious rate. A V-2 rocket, the largest built to date, consumes five tons of alcohol and five tons of liquid oxygen during the 20 seconds or so that its motor is operating.

For their rocket interceptor planes the Germans devised a different fuel consisting of hydrazine hydrate, methyl alcohol, and water and potassium cuprocyanide. They used an 80-percent concentration of hydrogen peroxide as the oxidizing agent. Even this fuel was inefficient from the weight standpoint. Two tons of it produced only three minutes of powered flight.

Rocket-fuel research is of such scope that major portions of it have been “farmed out.” Cal Aero Technical Institute of Glendale, Calif., for instance, is engaged in a big program of testing German rocket and gas-turbine engines for Wright Field, especially to improve upon the original combustion chambers.

An interesting sidelight on gas-turbine research is the building of small gas turbines from surplus turbo-superchargers. The superchargers were used in nearly all A

merican bombers and in many fighter aircraft during the war and since then it has been discovered that the superchargers can easily be rebuilt into gas turbines. The original superchargers consisted of a drive shaft to which was attached a turbine wheel and a compressor. Conversion consists principally of adding sheet-metal ducting. Air from the compressor is led to a simple firebox where kerosene or other jet fuel is burned, and the combustion gases are ducted back to the turbine wheel and from there to an exhaust nozzle. One converted turbo unit has enough power to fly a small plane of the drone type, and two of the small gas turbines provide enough power for a one or two-place light plane.