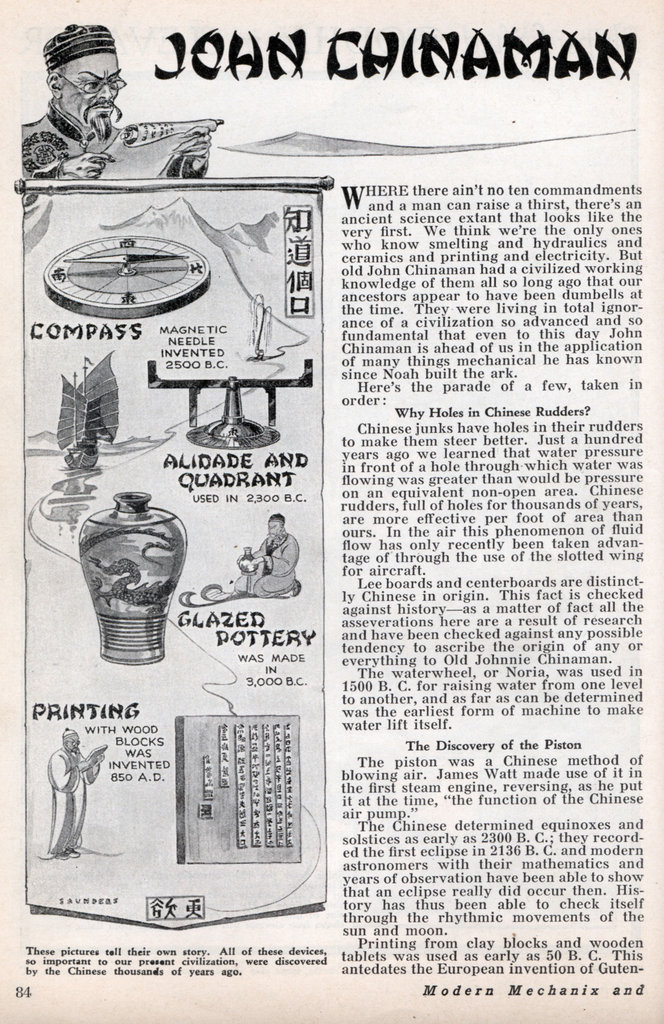 Here’s the parade of a few, taken in order:

Why Holes in Chinese Rudders?

Chinese junks have holes in their rudders to make them steer better. Just a hundred years ago we learned that water pressure in front of a hole through which water was flowing was greater than would be pressure on an equivalent non-open area. Chinese rudders, full of holes for thousands of years, are more effective per foot of area than ours. In the air this phenomenon of fluid flow has only recently been taken advantage of through the use of the slotted wing for aircraft.

Lee boards and centerboards are distinctly Chinese in origin. This fact is checked against historyâ€”as a matter of fact all the asseverations here are a result of research and have been checked against any possible tendency to ascribe the origin of any or everything to Old Johnnie Chinaman.

The waterwheel, or Noria, was used in 1500 B. C. for raising water from one level to another, and as far as can be determined was the earliest form of machine to make water lift itself.

The Discovery of the Piston

The piston was a Chinese method of blowing air. James Watt made use of it in the first steam engine, reversing, as he put it at the time, “the function of the Chinese air pump.”

The Chinese determined equinoxes and solstices as early as 2300 B. C; they recorded the first eclipse in 2136 B. C. and modern astronomers with their mathematics and years of observation have been able to show that an eclipse really did occur then. History has thus been able to check itself through the rhythmic movements of the sun and moon.

Printing from clay blocks and wooden tablets was used as early as 50 B. C. This antedates the European invention of Gutenberg in 1463 A. D. by quite some little span of time.

The Chinese use of instruments resembling armillary spheres and quadrants proves that they antedated the alidade of Tycho Brahe by at least three centuries, knew navigational elementals before we did.

No Iron Age in China

Bronze was used about the 5th Century B. C. Funny that the Chinese never passed through an iron ageâ€”that phase of world history is really Occidental. But they knew smelting and the primitive reduction of copper bearing ores. Their beautiful china-ware and ceramic work, clay firing, etc., as expressed in cloisonne work where a vase or dish is put through hundreds of firings for decorative colorings, is well known. The art is reported by Marco Polo after his first trip to the Orient.

Use of the loom was known in 1200 B. C. and the same form is used in many Chinese provinces today.

The compass as applied to the navigation of ships really had its origin in the Chinese magnetic bar which was used on wagon trains to give the drivers some sense of general direction in their journeys.

Travels of the Compass

The Arabs adapted it to desert traveling and it was taken thence to the shores of the Mediterranean. Phoenicians used it in a rough form. Later we find Columbus using a sensitized needle floating in a bowl to show him “whether his ship was standing on her ear or no.”

The Chinese have been foremost among the early cultural races in their advancement of things pertaining to shipping and to the sea. Marco Polo thought the junks of the Chinese very quaint at first sight, but was amazed at the efficiency of a sail held in place by battens. It was so superior to the loosefooted square sail the Romans had handed down in turn from the Vikings, that the real beginning of the fore-and-aft rig began when Polo returned with battened sails to Europe.