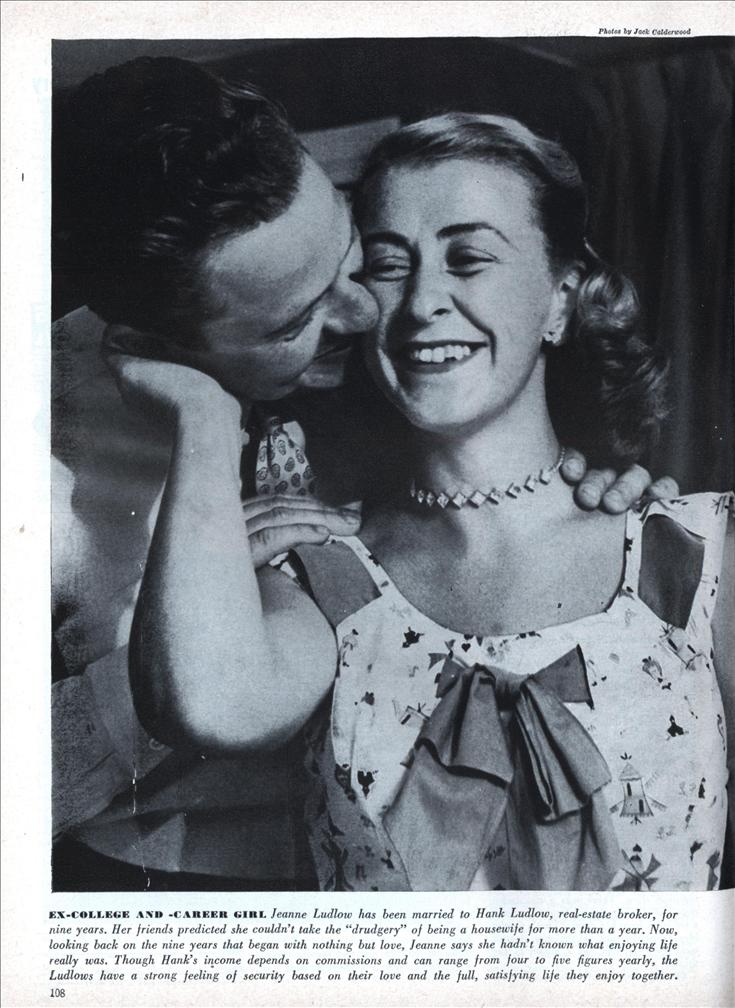 The sun poured down out of a white sky onto the bright orange desert sand, and I could feel little rivers of sweat creep down my neck. Waves of heat bounced off the gaudy Tatar huts dotting the valley. People standing near were wearing fur hats, fur coats, and heavy leather pants. The horses stood quietly, bearing riders holding exotic spears and plumed metal helmets. The heat clung to everything like fog. Nobody spoke. We waited for the word. A pleasant voice said, “Quiet, everybody. Stop smiling and stop chewing gum.” The horses moved forward. One of them bore Susan Hayward, shrouded in veils, wearing a brocaded jacket, sable cuffs, and Chinese pants. Susan, a Tatar princess, had just been captured by a native daredevil named John Wayne. (He plays Genghis Khan.)

You’ll be seeing this scene and others somewhat less tranquil in a Technicolor CinemaScope movie filmed last summer by RKO in southern Utah. Since RKO dug deep down in the corporate jeans for the $6,000,000 it took to create a super-Western about Genghis Khan, I flew out to Saint George, Utah, to watch them spend it. Part of the dough went into 1,200 costumes for the men of three Oriental tribes. Presiding over the research and designing was a young lady named Yvonne Wood, a one-woman expert on jerkins, buskins, and What Well- dressed Mongolian Hordes Used to Wear. On location in Utah, she had her hands full keeping the plumes waving and the actors ventilated.

“The big problem,” she explained, “was one of identification. Clothes for three tribes in this picture had to be arranged so the audience could tell them apart instantly. And in the battle scenes, it helps the actors know which team is which. Otherwise, they’d be whacking each other indiscriminately. And up here in this furnace, I have to keep explaining to the boys how they can avoid collapsing in all that fur and leather. The trick is to loosen your belt between takes. You have to get air around your stomach. They love the costumes, because they’re really very becoming—but half the time they curse me. They love me,” she went on, “but I should drop dead.”

Desert Caravan a la Hollywood She pulled a Mexican straw hat down over her bobbed brown hair. Behind her, an extra lay face down on a wooden sawhorse, shirt off, his back glistening in the sun. We were standing in a cluster of air-conditioned trailers (for the stars), a truck loaded with iced soft drinks (for everybody), a row of a dozen bright-yellow school buses (for toting the crew back and forth to their motels), and a jumble of trucks bearing huge spotlights, generators, and a miscellaneous sprawl of movie machinery. Beyond lay the native village, a community of sixty huts built in the studio’s Hollywood shops and trucked to Utah. They were made of steel pipes and covered with rug lining. Four were constructed of fireproof materials. Reason: the script required them to be set on fire by Mongol raiders. Necessary accessory: a fire engine.

When the noon lunch call sounded, work knocked off and everybody from grips to stars formed a line for chow. The menu consisted of roast beef, string beans, fruit salad, ice cream, and cake, slapped on Army-style metal trays and eaten on long wooden tables under a tent. I wasn’t lucky enough to get into the shade, and before I had taken aboard two bites of the beef, my ice cream was limp. Susan Hayward came over with a 3-D camera and pointed it at some of the day’s guests. “It’s my turn,” she said, “so hold still.”

That night I went to dine at the small modern house in Saint George that the studio had rented for Miss Hayward. John Wayne was occupying another one across the street. It was an early dinner, since actors on location must rise with the sun. We cooked steaks over charcoal on a terrace. Susan’s nine-year-old twin sons, Timothy and Gregory, appeared briefly at dinner, blond and washed behind the ears, triumphantly displaying report cards. Gregory had gotten almost all A’s. Susan explained that a couple of local college boys had been pressed into service to take the twins fishing and exploring in the local canyons while Mother was busy making like a twelfth-century maiden. After dinner, a phone call came with news that the plane had not arrived and there would be no showing that evening of the previous day’s rushes. Susan said “Okay, we’ll have music instead. Let’s go find a piano and make Whitcomb play.”

The nearest eighty-eight turned out to be eight blocks away at the Veterans of Foreign Wars clubhouse, and when we arrived a local women’s club was using the hall for a meeting. Larry Germaine, Susan’s hairdresser and head of RKO’s make-up department, reported the ladies were in executive session, and besides, a reading was in progress. “Piano is on the platform behind the speaker,” he told Susan. “They’re not using it, but we can’t just barge in.” The Hayward back stiffened. “Let me give a reading,” she said, and marched into the meeting. When we got up the nerve to look. Miss Hayward was on the platform, calmly explaining to fifty startled Saint George clubwomen that she was sorry to interrupt but she needed their piano. She beckoned to me. “Let me present Jon Whitcomb, the illustrator,” she said, in tones of a lecturer. “He’s going to play it. Carry it out to the next room, boys,” she said. We rounded up a few more pallbearers and wrestled the piano of! the platform and through the assembled ladies. We closed the double doors. “All right, Whitcomb,” said the general manager, “play.” I played.

Susan’s authority, acquired in her years of growing into a major movie star, might be compared to a stainless-steel hand in a rather fragile velvet glove. She stands for no nonsense. She is philosophical about the recent termination of her marriage. “I’m looking for a husband,” she told me, “who doesn’t object to a girl who knows what she wants. I think I’d like one with some dough of his own. It might be fun to let somebody else do all the work for a change. And he’s got to be an outdoor man who likes hunting and fishing. If you know of one, send him around.”

Susan’s coach of state (pictured above) shows how ladies of quality toured the Gobi Desert in the days before air-conditioned Cadillacs. Notice the water-buffalo propulsion, the lavish use of pillows for upholstery, and the 360° view with cross ventilation.

The Star I Couldn’t Recognize Agnes Moorehead, a handsome redhead. leaves no wrinkle unapplied in her devotion to the cause of acting. When Susan introduced me to her between scenes in the shadow of a tent. Miss Moorehead, who plays Wayne’s mother in the picture, was almost completely unrecognizable. Her eyebrows were iced with white lacquer, her skin painted in yellow folds, and only the magnificent ice-blue Moorehead eyes reminded me of the face that keeps turning up on all the best-actress lists. Born in Reeds-burg, Wisconsin, the lady has a master’s of Wisconsin. Recently she barnstormed the country in “Don Juan in Hell” and a one-woman show. Three weeks after I saw Miss Moorehead as an elderly Oriental crone in Utah, I ran into her shopping in New York. She was radiant and chic, with a redheaded husband in tow. He’s Robert Gist, the Lieutenant Keefer of the New York “Caine Mutiny Court Martial” cast.

Pedro Armendariz is a big star in Mexico. Almost as big and as heavy as John Wayne, he’s an old Wayne pal and has made several costarring films with Wayne. Pedro’s mother was a Texas girl. He went to school at California Poly-tech, where dramatics won out over aeronautical engineering. His role in “The Conqueror,” that of No. Three star, after Wayne and Hayward. almost finished him off. A day or two after I left Utah, he was thrown in the middle of a six-horse melee, and when they got him to the hospital operating room it took twenty-six stitches to close his jaw. The End