Popular Mechanics
Issue: Jan, 1924
Posted in: Automotive, How to
Tags: how its made
No Comments on Jungle to Factoryâ€”Trail of Auto Tire (Jan, 1924) 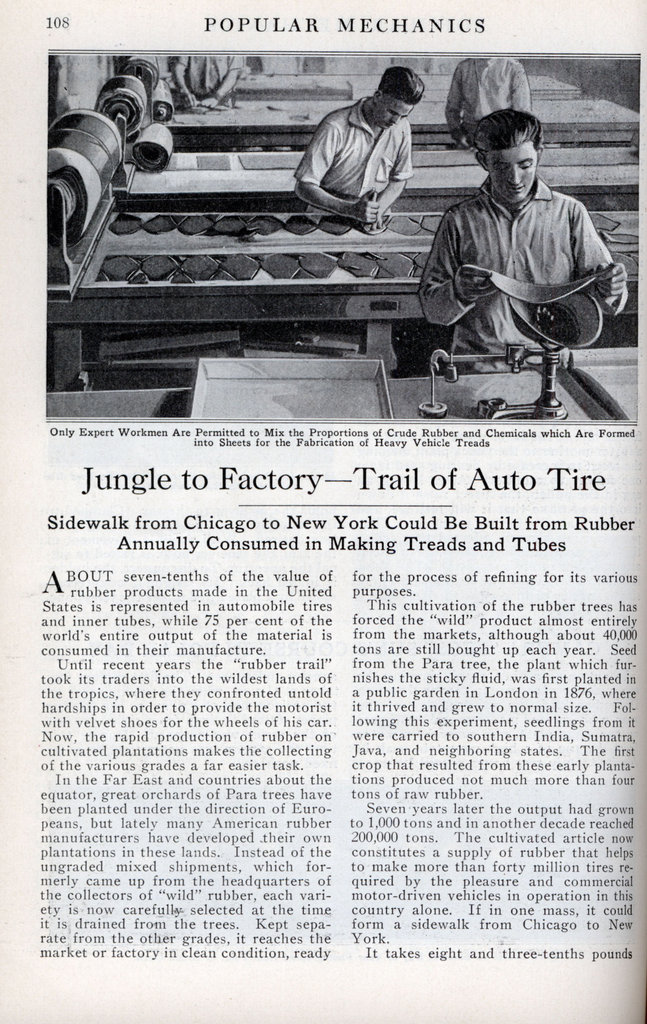 Jungle to Factoryâ€”Trail of Auto Tire

Sidewalk from Chicago to New York Could Be Built from Rubber

ABOUT seven-tenths of the value of rubber products made in the United States is represented in automobile tires and inner tubes, while 75 per cent of the world’s entire output of the material is consumed in their manufacture.

Until recent years the “rubber trail” took its traders into the wildest lands of the tropics, where they confronted untold hardships in order to provide the motorist with velvet shoes for the wheels of his car. Now, the rapid production of rubber on cultivated plantations makes the collecting of the various grades a far easier task.

In the Far East and countries about the equator, great orchards of Para trees have been planted under the direction of Europeans, but lately many American rubber manufacturers have developed their own plantations in these lands. Instead of the ungraded mixed shipments, which formerly came up from the headquarters of the collectors of “wild” rubber, each variety is now carefully selected at the time it is drained from the trees. Kept separate from the other grades, it reaches the market or factory in clean condition, ready for the process of refining for its various purposes.

This cultivation of the rubber trees has forced the “wild” product almost entirely from the markets, although about 40,000 tons are still bought up each year. Seed from the Para tree, the plant which furnishes the sticky fluid, was first planted in a public garden in London in 1876, where it thrived and grew to normal size. Following this experiment, seedlings from it were carried to southern India, Sumatra, Java, and neighboring states. The first crop that resulted from these early plantations produced not much more than four tons of raw rubber.

Seven years later the output had grown to 1,000 tons and in another decade reached 200,000 tons. The cultivated article now constitutes a supply of rubber that helps to make more than forty million tires required by the pleasure and commercial motor-driven vehicles in operation in this country alone. If in one mass, it could form a sidewalk from Chicago to New York.

It takes eight and three-tenths pounds of the raw Substance to make one of the average tires, and about two pounds for an inner tube. For the casing, four and a half pounds of cotton are also required. Plantation rubber when brought to the factories is stored away in cool bins until needed, but the “wild” variety is chopped into small pieces and soaked in warm water to soften it. It is then passed into a “cracker” machine where rolls with sharp knobs break it up into a coarse, spongy mass. Water flowing over it washes out the sand, dirt, bits of bark, and other foreign substances that get into it during its preliminary treatment at the hands of the jungle gatherers. After drying, the rubber is mixed with other materials and becomes the uncured or “green” compound. An added step in the trail of the rubber from the jungle to the factory has been lately taken by one large manufacturing plant, which loads the milky fluid, called latex, into tank boats as it is gathered, and thus conducts it directly to the treating rooms. There it is pumped into large vats, and is sprayed by a recently invented machine into a heated chamber where it becomes a spongy mass deposited on the moving floor of the room, quite free from dirt frequently found in baled rubber.