Remember that safety standards and knowledge of long-term chemical effects on people were VERY different in 1931. Please refrain from actually trying any of the pranks here. Besides possibly hurting yourself or others, it’ll just make you look like a dick. 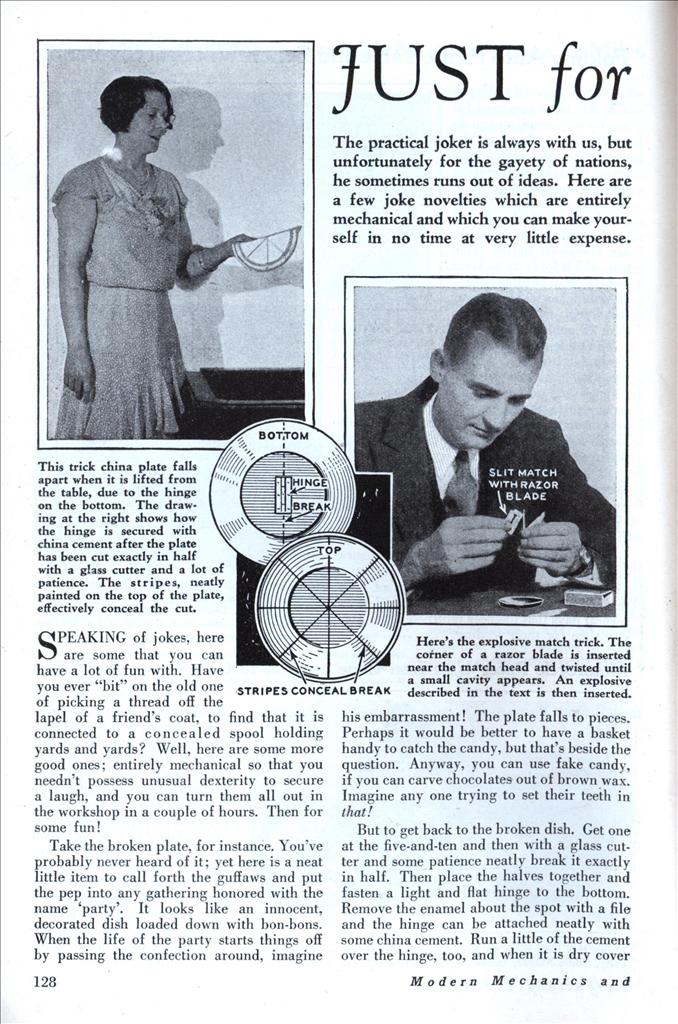 The practical joker is always with us, but unfortunately for the gayety of nations, he sometimes runs out of ideas. Here are a few joke novelties which are entirely mechanical and which you can make yourself in no time at very little expense.

SPEAKING of jokes, here are some that you can have a lot of fun with. Have you ever “bit” on the old one of picking a thread off the lapel of a friend’s coat, to find that it is connected to a concealed spool holding yards and yards? Well, here are some more good ones; entirely mechanical so that you needn’t possess unusual dexterity to secure a laugh, and you can turn them all out in the workshop in a couple of hours. Then for some fun!

Take the broken plate, for instance. You’ve probably never heard of it; yet here is a neat little item to call forth the guffaws and put the pep into any gathering honored with the name ‘party’. It looks like an innocent, decorated dish loaded down with bon-bons. When the life of the party starts things off by passing the confection around, imagine his embarrassment! The plate falls to pieces. Perhaps it would be better to have a basket handy to catch the candy, but that’s beside the question. Anyway, you can use fake candy, if you can carve chocolates out of brown wax. Imagine any one trying to set their teeth in that!

But to get back to the broken dish. Get one at the five-and-ten and then with a glass cutter and some patience neatly break it exactly in half. Then place the halves together and fasten a light and flat hinge to the bottom. Remove the enamel about the spot with a file and the hinge can be attached neatly with some china cement. Run a little of the cement over the hinge, too, and when it is dry cover up the job with some white gloss enamel. Place four or five red or black stripes across the diameter of the inside of the dish and a similar narrow band around the edge. If the job is neat it will pass muster as a decorated imported item. At any rate, the important thing is that when any one picks it up it falls to pieces in their hands.

There there is the old but always popular chestnut, exploding matches. You can make them so that the explosive spot near the head is not visible. Take a pinch (and a pinch only) of black iodine crystals and cover them with strong ammonia water in a saucer. After a half hour pour off the ammonia and the paste that is left, when dry, is explosive. With the corner of a razor blade make a small slit near the match head and twist the blade until it leaves a small cavity in the wood. Tamp a little of the paste into this, squeeze the wood hack together and wipe off the surface. The slit will then he invisible but the match, when dry, will go off with a bang shortly after it is lighted. The explosive in small quantities is harmless. Don’t try to handle it when dry, wash away any remaining in the dish down the sewer, and make up no more than a pinch at a time.

Speaking of matches, try this one. It is a box of safety matches that, when picked off the table, rattles around as if it were alive. Use only the wood boxes and prepare them as follows: In the center of the bottom cut a small hole the size of a dime or nickel and be sure that it is cut in both the drawer and the box. Then fasten a two-inch rubber band, with a button threaded on it, in the drawer of the box so that it stretches from end to end. Twist the button about like you would wind up the propeller of a model plane, then close the box and place it 011 a flat surface. The button should project slightly through the hole in the box so that on a table it cannot spin around; but let any one pick it up and it goes off with a roar like an airplane.

Getting back to matches, again, have you ever tried lighting one that was damp and wouldn’t light? To most people it is exasperating. It also provokes plenty of fun. Soak the wood part of a handful of safety matches in a hot solution of ammonium phosphate. When they are dry, try to light one. It lights all right, but passes out immediately afterwards. Next, run several matches between the rows in a paper of paper matches. Soak the heads in water until they will come off nicely. Then dip them in a thin composition of water, brown water color and plaster of paris. When dry these heads will refuse to light at all, of course, and they are more than amusing when handed to the perpetual match borrower.

Many people borrow pencils as often as matches; supposing you handed a friend a pencil that, as soon as he starts to use it, becomes so hot it is unbearable in the hands? It is a harmless little joke and for it you need a cheap oversize metal pencil such as are sold for a quarter. Remove all of the interior mechanism and cement a short piece of lead in the point. Get some fresh quick lime and break it up into granular pieces. Fill the pencil half-way with this and tamp it down so it will not fall out. Then fill a small vial with a dilute solution of hydrochloric acid and slip it into the remaining space in the pencil, placing the cap on afterwards. Keep the pencil point up until your friend uses it; after that.

when the acid runs down into the lime, there is no noise but an almost instant heat that causes the studious one to drop it at once.

And then there is another pencil joke also suitable for use during a bridge game. Cut away an inch of the point of a wood pencil neatly and cleanly with a razor blade. Break out the lead in the point with a needle, and also a part of the lead in the remainder of the pencil. Glue a piece of round rubber band into the latter, thread the point onto this and with the rubber stretched slightly cement it into the point. Then cut it off excepting a short piece to serve as an imitation pencil lead. If you try to write with it you’ll notice two things quickly; that the rubber lead point bends, and that further pressure causes an inch of the point or end of the pencil to apparently break off, although it instantly snaps back when pressure is removed.

Coat hangers are made so that anything placed on them instantly falls to the floor, but with this hanger the coat or cap hangs until the person has turned his back and then they fall with a plunk. Two pieces of metal, japanned black, are used. They should about 2″x3″ with two of the narrow ends hinged together and fitted with a coil spring that keeps them flat against each other. Solder a coat hanger to one metal plate (see drawing) and screw the other to the wall. Between them place a spot of soft pitch. When a coat is placed on the hanger the pitch will keep it hanging for five seconds; finally the pitch will give way and the coat falls. The spring returns the hanger to its original position where it again makes contact with the pitch. In use the performance is continuous.

Have you ever heard of the melting spoon? Popular years ago, it is practically unknown at present. With plaster make a cast of a new teaspoon and when it is dry you can cast perfect replicas with the following easily made metal alloy: Lead, 3 parts; tin, 2 parts; bismuth, 5 parts. Melt them in a crucible and remove from the heat; then add one part of quicksilver. Buff the spoons cast with this alloy until they shine like silver. Give one to the habitual tea drinker. If the tea is fairly warm the spoon will simply crumple up in his grasp and settle in a molten state at the bottom of the cup! The spoons melt at 150 degrees; and of course the metal can be collected and cast over again.

If you want to have some fun with a friend who is all slicked up for a large evening try this trick on him. Sew a strip of black felt around one end of a cardboard tube and over the other end paste some decorated tissue paper. Then smear the felt with soot and tell your friend to look through the tube. When he takes it down there will be a black ring around his eye, unknown to him.

The drawings on this page show a number of other joke novelties that are easily made and capable of much harmless fun. The exploding deck of cards goes off with a bang when it is lifted from the table; an ordinary volume, the “Fountain of Youth,” sprinkles perfumed water on whoever opens it. The dribble glass gives a similar impromptu bath to the drinker, as does the trick perfume bottle. And imagine the rumpus raised by the fair sex on opening the box of chocolates, when a mouse pokes its head back and forth from between the bon-bons! The three cigarette jokes consist of (1) the cigarette that quickly burns to pieces when lighted, (2) the pack that is heavier than a cigarette borrower would possibly surmise and (3) the pack of cigarettes that, glued together, are extremely difficult to remove from the package.