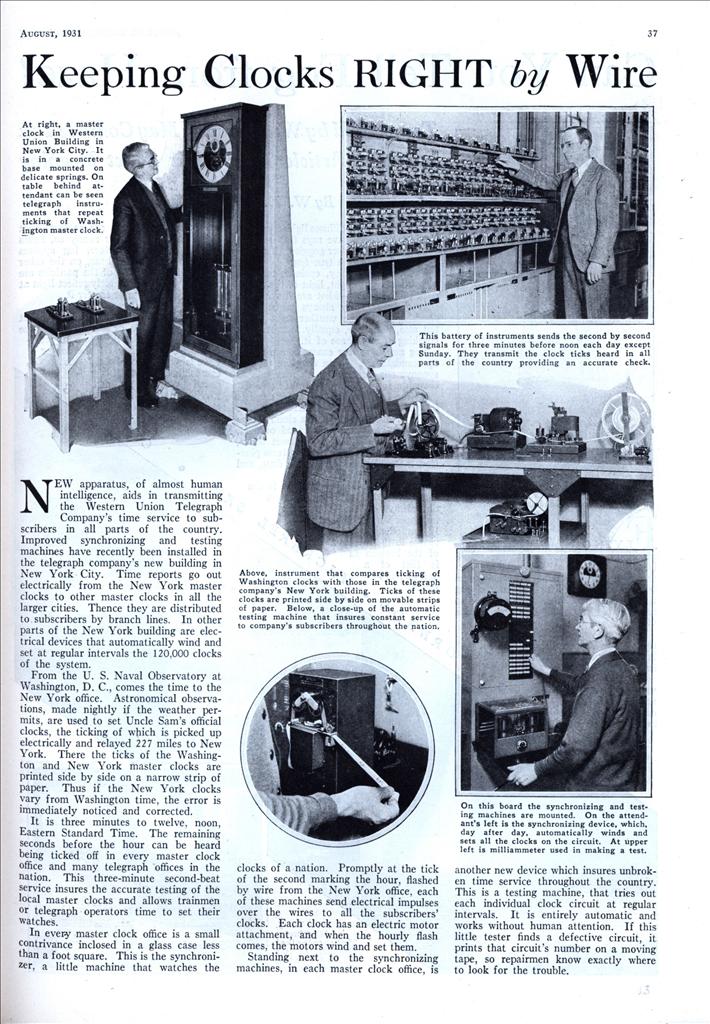 NEW apparatus, of almost human intelligence, aids in transmitting the Western Union Telegraph Company’s time service to subscribers in all parts of the country. Improved synchronizing and testing machines have recently been installed in the telegraph company’s new building in New York City. Time reports go out electrically from the New York master clocks to other master clocks in all the larger cities. Thence they are distributed to subscribers by branch lines. In other parts of the New York building are electrical devices that automatically wind and set at regular intervals the 120.000 clocks of the system.

From the U. S. Naval Observatory at Washington, D. C, comes the time to the New York office. Astronomical observations, made nightly if the weather permits, are used to set Uncle Sam’s official clocks, the ticking of which is picked up electrically and relayed 227 miles to New York. There the ticks of the Washington and New York master clocks are printed side by side on a narrow strip of paper. Thus if the New York clocks vary from Washington time, the error is immediately noticed and corrected.

It is three minutes to twelve, noon, Eastern Standard Time. The remaining seconds before the hour can be heard being ticked off in every master clock office and many telegraph offices in the nation. This three-minute second-beat service insures the accurate testing of the local master clocks and allows trainmen or telegraph operators time to set their watches.

In every master clock office is a small contrivance inclosed in a glass case less than a foot square. This is the synchronizer, a little machine that watches the clocks of a nation. Promptly at the tick of the second marking the hour, flashed by wire from the New York office, each of these machines send electrical impulses over the wires to all the subscribers’ clocks. Each clock has an electric motor attachment, and when the hourly flash comes, the motors wind and set them.

Standing next to the synchronizing machines, in each master clock office, is another new device which insures unbroken time service throughout the country. This is a testing machine, that tries out each individual clock circuit at regular intervals. It is entirely automatic and works without human attention. If this little tester finds a defective circuit, it prints that circuit’s number on a moving tape, so repairmen know exactly where to look for the trouble.