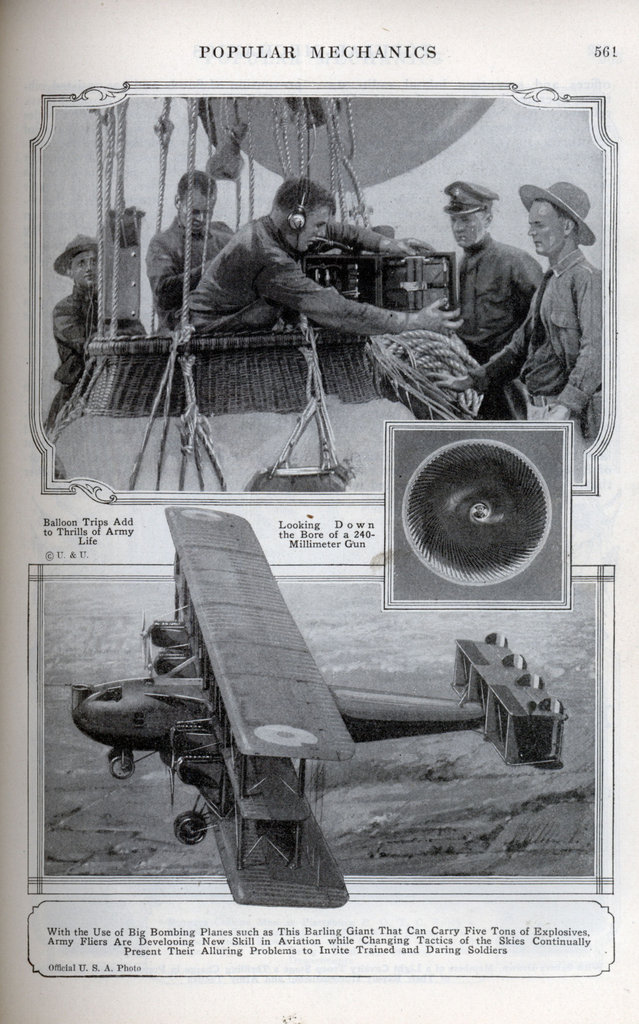 Keeping the Army Busy in Peace Time
Aircraft, Wireless, Poison Gas and Even Cavalry Horses Put to Work to Aid Industry and Agriculture

WHAT does the army do in peace time besides getting ready for another war? For one thing it has converted war’s deadliest poison gas to such varied uses as repelling bank burglars, quelling riots and curing colds. It has kept the battle planes flying to locate forest fires and spray the boll weevil of the cotton fields with insecticides. The gas mask has been improved and is used by firemen, mine-rescue workers and employes of chemical plants. The best of the cavalry stallions have been placed at the disposal of farmers to breed a better type of work horse.

Strangely enough, the most horrible and devastating form of warfareâ€”the use of poisonous gasesâ€”is the one that lends itself to the greatest service in times of peace. The chemical-warfare service has made numerous transformations of its agencies for serving peaceful pursuits and industries. These converted usages range from the equipping of 3,500 banks with devices for combating burglars to the treatment of common colds with chlorine. The mask which the American doughboy employed as a protective device against poisonous gas fumes, with certain modifications, is now serving fire-fighting departments, mines, foundries, and other agencies where lives may be imperiled by poisonous gases or fumes. This type of gas mask has lately been provided with a special canister, which makes it safe against all known gases, and a diaphragm has been added by means of which a person is enabled to talk while wearing this protective device. The widespread use of this gas mask is suggested by the fact that many of the larger cities have adopted it for use by their fire departments, thus contributing to the safety of firemen. I “Tear gases,” the spraying of which in the face of a person causes tears without endangering life, are useful in capturing barricaded criminals and in quelling riots and outbreaks in prisons. A concern in Pittsburgh is producing a policeman’s club with a small trigger arrangement for discharging tear gas in measured quantities. This gas-containing club enables a policeman to push a trigger which, in turn, releases a safety valve, thus squirting gas in the face of a person resisting arrest.

Another war-time poison gas is being substituted by the public health service for a gas formerly employed in fumigating ships. It is not only effective but is said to be safe from danger to persons administering it.

The air service, by means of a co-operative arrangement with the department of agriculture, also has devised the most effective wholesale method yet found for destroying the boll weevil. Aeroplanes carrying insecticide aloft are enabled to spray poisonous dust on boll-weevil-infested cotton by the acre. Similar treatment of insects on fruit trees has proved effective. Moreover, war-time aeroplanes have been employed in reforesting denuded areas that were not readily accessible to other seeding appliances. Recently, this branch of the United States army adapted bomb-carrying aeroplanes to the purpose of dropping explosives from the sky in shattering great formations of ice to prevent floods.

The radio research laboratories of both the war and navy departments, although primarily dedicated to devising useful war-time communication devices, are constantly introducing inventions of great service to peaceful arts of intelligence.

Men are being trained in more than sixty occupations in the citizens’ military training camps, which had a total food, uniform and railroad fare to and from home to camp.

President Coolidge says, “These camps are an essential in the plan of national security. They promote obedience to law and respect for the institutions of a well-ordered society. Young men are helped to physical health, mental vigor and moral excellence. Social understanding and democratic feeling are developed; love and reverence for the flag are the natural outcome of the training. Courtesy in act, sympathy in feeling, tolerance in thought, are the ideals.”

Sports are emphasized at these citizens military training camps. The young men engage in baseball, tennis, track and field games, boxing, riding, handball, volley ball and swimming. Each camp, for instance, maintains a baseball league. Boxing instruction is given by the most competent teachers. Moreover, rifle and pistol shooting is taught every person enlisted in a military training camp. If a person qualifies as a sharpshooter, he is entitled to go to Camp Perry, at government expense, where the greatest rifle experts in the country compete for national honors. The war department not only maintains a motion-picture service but has made certain improvements in the projection of pictures. For instance, a system of longdistance projection with tungsten-filament lamps has been developed, making them available for use in larger theaters, with throws from booth to screen of over 760 feet. The tungsten-filament lamps are said to be superior to arc lamps. The former are noiseless, emit no fumes, radiate less heat, require little attention while burning and consume less than one-half of the electric current required by arc lamps. This improvement is a patented invention of the army motion-picture service.

A special service is rendered farmers by the quartermaster corps of the war department in peace time. Three years ago the army horse-breeding project was introduced. By means of this plan there are available 285 stallions for improving horses on farms.

Colonization, strange as it may seem, is a peace-time activity of the war department. Churches, schools, roads and railroads have been built by the army in the Philippine islands as a means of ending strife in that colonial possession. Another striking example of colonization is that of administering the affairs of Alaska. Today, in the administration of the business of this great territory by army officers, $100,000,000 are annually transmitted over fifty-seven cable and telegraph offices and seventeen inland radio stations, operated by the signal corps. On a relatively less scale, business is transacted by the army in other colonies or territories that have been acquired by America. And, to again revert to the conversion of death-dealing agencies into instruments of value to peaceful pursuits, the war department has made a worthwhile contribution to the industries in the way of an active charcoal which is of use in manufacturing gasoline from natural gas and coal-tar products. Similar research has resulted in the laying of the foundation of our dye industry.

The corps of engineers is another branch of the army that has long adjusted its personnel and instrumentalities to the needs of peaceful industries. During the past two years the army engineers have studied proposed water-power developments in excess of 20.000,000 horsepower. This is more than twice the existing power development of the United States and more than the combined potential water-power resources of Norway, Sweden, Finland and the Arctic and Baltic drainages of Russia. Moreover, it has been claimed that the corps of engineers has led in the prevention of floods and has assisted substantially in the protection of our forests.

The owners of 15,000.000 motor vehicles in the United States and the millions of persons who wear eyeglasses will be interested in a process developed by the war department whereby it is easier to see in misty and rainy weather. Of even greater value to owners of automobiles, is the development of a material as a protection against carbon monoxide when working in closed garages. Still another substance has been produced as a safeguard against ammonia fumes.

The peace-time activities of the war department may at times take queer angles of procedure. For instance, just now the army, in co-operation with the navy department, is experimenting with a non-fouling paint which may avoid the formation of barnacles on ship bottoms.

The diversion of war-time explosives to productive uses of agriculture, the development of airways for commercial flying traffic, the establishment of a board of sociology for modernizing the treatment of prisoners, and the exploring and surveying of new territory, are among other peace activities of the war department.