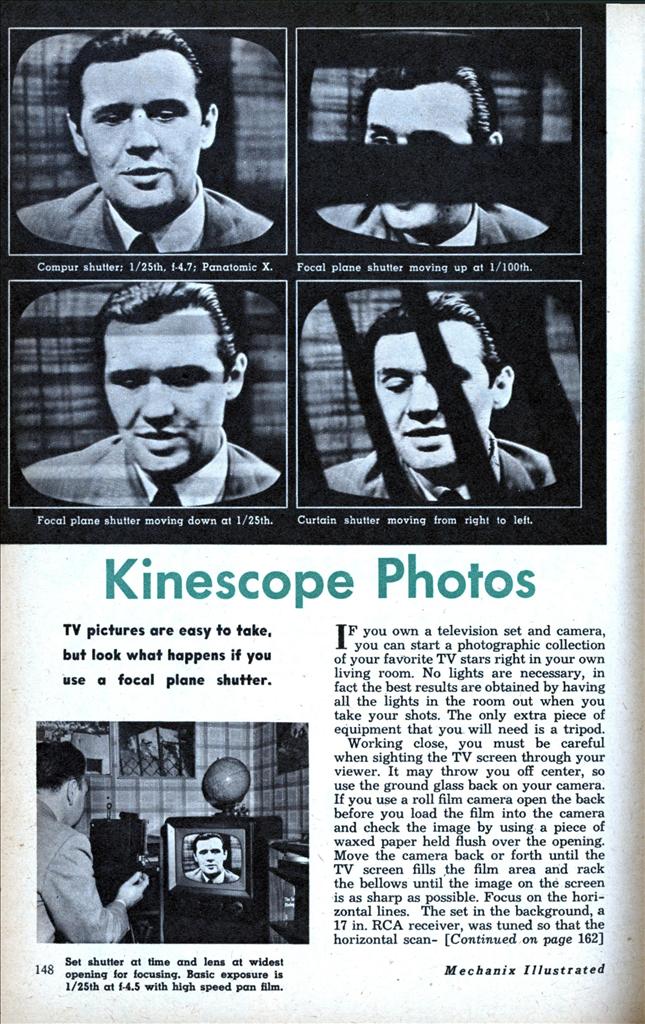 TV pictures ore easy to take, but look what happens if you use a focal plane shutter.

IF you own a television set and camera, you can start a photographic collection of your favorite TV stars right in your own living room. No lights are necessary, in fact the best results are obtained by having all the lights in the room out when you take your shots. The only extra piece of equipment that you will need is a tripod. Working close, you must be careful when sighting the TV screen through your viewer. It may throw you off center, so use the ground glass back on your camera. If you use a roll film camera open the back before you load the film into the camera and check the image by using a piece of waxed paper held flush over the opening. Move the camera back or forth until the TV screen fills the film area and rack the bellows until the image on the screen is as sharp as possible. Focus on the horizontal lines. The set in the background, a 17 in. RCA receiver, was tuned so that the horizontal scan- ning lines were distinctly visible. The contrast control was stepped up slightly but not to its maximum. Because TV pictures tend to be rather flat, it is a good idea to increase developing time slightly.

A between the lens shutter will give you the best results. If you have an f-4.7 lens an exposure of l/25th works well. If you have a faster lens, say an f-3.5, you might shoot at l/50th of a second to be sure to stop any action. A higher shutter speed is not recommended. The photo at upper left shows Cesare Sieppi of the Metropolitan Opera Company. It was taken with a Compur shutter at l/25th and f-4.7 on Panatomic X film. The other pictures were also taken at f-4.7 on Panatomic X film but their rather interesting flaws are due to the fact that they were taken with a curtain or focal plane shutter.

All TV receivers in the United States are standardized so that the image on the screen is formed by 525 lines—regardless of the size of the screen. Every other line on the screen is scanned by an electron beam in l/60th of a second. You can readily see, therefore, that if you use a camera with a focal plane shutter which exposes the film by means of a moving slit, the camera will pick up the odd effects shown in the other three photos. Variations of this phenomenon are produced when the position of the camera is changed so that the curtain travels up instead of down, from right to left or from left to right. •