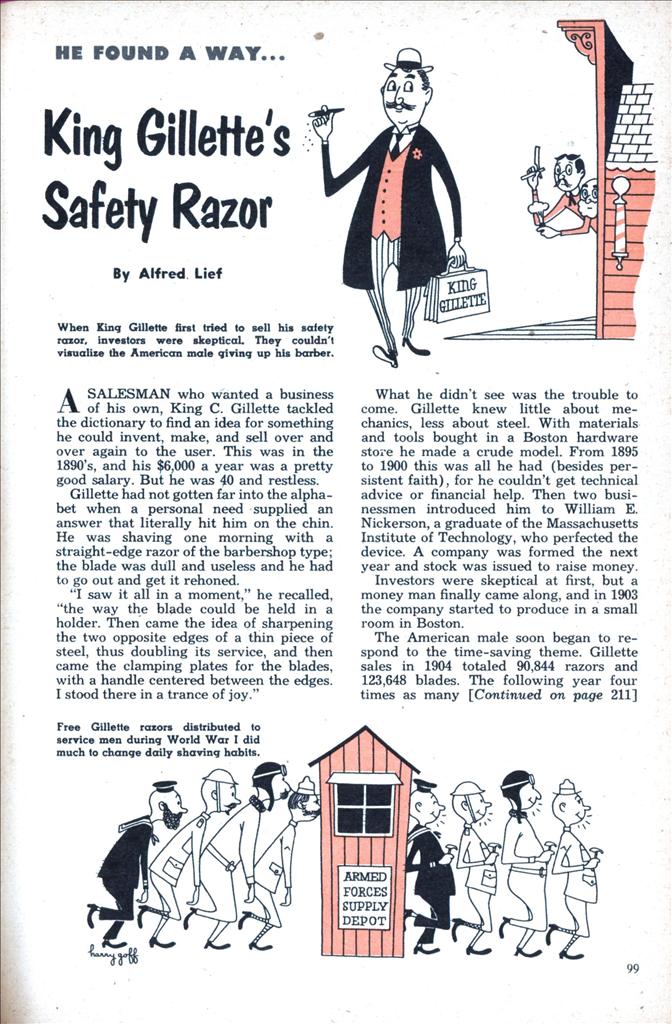 A SALESMAN who wanted a business of his own, King C. Gillette tackled the dictionary to find an idea for something he could invent, make, and sell over and over again to the user. This was in the 1890’s, and his $6,000 a year was a pretty good salary. But he was 40 and restless.

Gillette had not gotten far into the alphabet when a personal need supplied an answer that literally hit him on the chin. He was shaving one morning with a straight-edge razor of the barbershop type; the blade was dull and useless and he had to go out and get it rehoned.

“I saw it all in a moment,” he recalled, “the way the blade could be held in a holder. Then came the idea of sharpening the two opposite edges of a thin piece of steel, thus doubling its service, and then came the clamping plates for the blades, with a handle centered between the edges. I stood there in a trance of joy.”

What he didn’t see was the trouble to come. Gillette knew little about mechanics, less about steel. With materials and tools bought in a Boston hardware store he made a crude model. From 1895 to 1900 this was all he had (besides persistent faith), for he couldn’t get technical advice or financial help. Then two businessmen introduced him to William E. Nickerson, a graduate of the Massachusetts Institute of Technology, who perfected the device. A company was formed the next year and stock was issued to raise money.

Investors were skeptical at first, but a money man finally came along, and in 1903 the company started to produce in a small room in Boston.

Another vision struck King C. Gillette— the gift of a razor to every man entering the armed forces. The company officers improved on this. They sold the government 4,800,000 razors at cost and let Uncle Sam present them to young bucks whose fuzz needed grooming. Out of the war came the new masculine habit of self-shaving, and a fellow could now travel in a Pullman and dispose of his blades through a slot in the washroom wall.

Just before the basic patents were about to expire in 1921, the company sought to forestall a flood of imitations by lowering the minimum price of a razor from $5 to $1. They realized it was less important to make a profit on razor sales than it was to keep pushing the blades.

World War II taught millions of men to shave daily. That was a new milestone in the business. Today the company manufactures 10,000,000 razors a year. Gillette is truly the King of the Safety Razor.