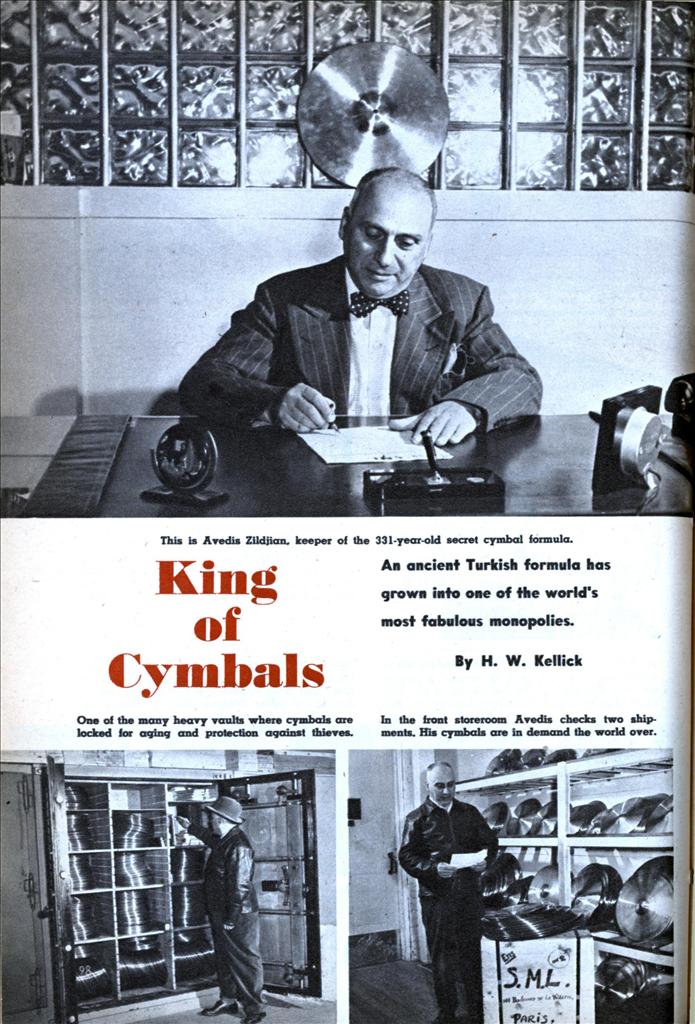 An ancient Turkish formula has grown into one of the world’s most fabulous monopolies.

IN quiet, colonial North Quincy, Massachusetts, a small vault-like structure as impenetrable as Fort Knox reverberates with a crash echoed ’round the world by 99 per cent of the professional bands and orchestras. There, behind double-locked doors in an explosion-proofed room, Avedis Zildjian zealously blends his secret cymbal formula kept for over 331 years and handed down to the eldest male of each succeeding generation like the royal crowns of France and Spain.

In 1623 the first Avedis, a Constantinople alchemist searching for the mythical method of making gold from base metals, bent over his smoking crucible and saw a yellow substance that glittered. And it was gold for his descendants who hammered it into the Zildjian cymbal—and one of history’s most fabulous monopolies.

No one has succeeded in duplicating the tone, quality and durability of Zildjian’s metal alloy. Competitors, chemists, scientists have sought the secret as adventurers have sought for Captain Kidd’s treasure— all without success and some with disaster. A German firm in 1925 wasted months of research and a small fortune in tin, copper and silver trying to duplicate the metal then gave up in despair. The Imperial Chemical Company of England experimented for three months before admitting defeat. An American sheet-metal manufacturer attempted to convince Zildjian it could supply him with comparable alloys. To demonstrate the quality of the Zildjian metal to the engineer, Avedis threw on the floor one of his cymbals only 15 thousandths of an inch thick, stamped on it, struck it with a sledgehammer without marring the contours of the disk. Six weeks later the representative returned and decreed it was absolutely impossible to hammer the metal; it was as brittle as glass. Then in 1920 a senior male family member not in the line of inheritance and therefore excluded from the process believed he nevertheless could duplicate it and set up his plant in Mexico City. The first day he blew up the plant and his head, literally, went with it.

A Hollywood producer flew a staff of cameramen and writers to the plant to film Zildjian’s process. They left the same day empty-handed when Avedis refused to divulge his secret.

The blending of the copper, tin and silver is a dangerous process. Explosions occur once or twice a week but the Zildjians have learned how to control them. Before they were localized, however, the plant went through a series of major explosions. After the first blow-up, the Aetna Insurance Co. returned three years’ premiums in full. Another put Avedis in the hospital for four months. Another burned off all his hair and eyebrows. The roof of the laboratory has been blown off so many times that after the last explosion Avedis replaced it with one of six-inch reinforced concrete—to “eliminate the nuisance of repairing it.”

One night about 20 years ago two thieves broke into the plant and in three trips carried off thousands of dollars worth of cymbals. Now a number of huge vaults have been installed. Over the factory windows are metal bars so hard that a special cutting tool is necessary to part them. The windows themselves open at an angle so acute that no human could possibly crawl through them. The entire building is theft-proof.

The modern history of the cymbal began with the first Avedis. As his fame spread he became known to patrons and guilds-men as Zildjian, the Turkish term for cymbalsmith. The cymbal had been used in the highly rhythmic music of the Byzantine civilization and down through the Middle Ages of most of the Eastern nations. When Strungk, Gluck and other romantic composers of the 18th century began to exploit the brilliant effects of the instrument in their scores, the demand spread to Western Europe.

A later Avedis, more salesminded than his predecessor, built a 25-foot schooner, loaded it with his art, and in 1851 sailed from Constantinople to Marseilles and then to London. At Paris and London fairs his cymbals won all prizes for excellence. He died in 1865 leaving two sons, neither of age. The secret passed, according to the Salic law, to his younger brother, Kerope, and in 1910 to Aram, son of the late Avedis. But Aram was as interested in the turbulent politics of Mid-Europe as he was in cymbal making and finally moved to another country, where he experimented with cymbal manufacture. Later when the political unrest subsided, Aram returned to Constantinople and continued his business.

With the World War came martial music, marching bands, drum and bugle corps paced by the clash of the Zildjian cymbal. America went jazz-happy and every band and dance orchestra resounded to its music. The cymbal market shifted to America. In 1929 when Aram decided to retire he passed the secret to the present Avedis.

Avedis Zildjian came to America in 1909 as companion of a son of a wealthy Turkish family. The two boys wandered to Boston where Avedis established a confectionery firm. In 1929 Uncle Aram wrote and told Avedis of his plans to pass on to him the cymbal secret but insisted he return to Constantinople. When Avedis argued that the industry could be established in America, Aram was skeptical. He maintained that a certain proximity to the salt water of the Bosphorus was necessary for the successful blending of the formula and Avedis had to convince him that America’s salt water was equally potent. Only after Aram had come to Massachusetts, tested its salt water and measured carefully the distance from Avedis’ proposed plant site in North Quincy to the ocean and found it was identical with that of the home factory, did he give his consent.

Avedis had difficulty obtaining qualified hammersmiths in America. The best in the country couldn’t handle his metal although he tried many at the then exorbitant rate of $3.00 per hour. With an employe of the original Turkish plant he hammered the cymbals himself and finally imported two metalsmiths from Europe whom he trained for three years. Today these are recognized as the most skillful craftsmen in the world of cymbals.

Because of existing restrictions on importing items which can be made in the country, England prohibits sale of Zildjian cymbals in her markets. Several months ago Avedis received a letter from a Scotsman complaining of the outrageous price he had paid for a Zildjian cymbal. Avedis, who despite increased costs of material has kept his prices at post-war level, wrote in reply, “This particular cymbal sells for $25 in Arnerica. My friend, you bought yours on the black market.”

Cymbals, like wine, improve with age. None is sold less than one year old and some age as long as 15 years. Many thousands now are curing in the Zildjian vaults. About 20,000 are sold each year. Artists such as Gene Krupa, Shelley Mann, Lionel Hampton, Cozy Cole, Louie Bellson, and Boston Symphony, N. Y. Philharmonic and Metropolitan Opera Co. players appear in person at the plant to select their instruments. Prices range from $7 for the smallest, 7-inch cymbal to $108 for the largest, 28-inch cymbal. Gongs, better than the oriental, cost $132 each.

No two cymbals have the same sound. They vary from 15 to 20 thousandths of an inch in thickness. There are 14 varieties: fast, fast-crash, crash, splash, swish, bounce, bebop, hi-hat, flange hi-hat, ride, finger, concert band, brass band and symphony. There are 25 different ways of playing each.

Avedis has two sons: Armand, the factory manager, and Robert, sales manager. Robert is the younger. Armand has three daughters and the absence of a male descendant caused much worry to the Zildjian household till two years ago when his wife presented him with a son to inherit the secret.

Armand tests all cymbals for tone before they leave the plant and plays in a local band for amusement. Avedis, an expert player himself, and Armand sometimes lock themselves in the curing vault and treat themselves to a concert.

The firm is so unique that it receives much unsolicited publicity. One night while listening to the radio, the Zildjians were startled by the words, “Like the name Avedis Zildjian on a cymbal, the name of DuPont is your assurance of the utmost in quality.” A well-deserved and significant compliment.

Avedis can tell why the family secret has remained as such for so long. “We have never entrusted it to a woman,” he says. “As Americans we respect our wives completely with this one reservation. Mrs. Zildjian can order me to do the shopping, but she has never been allowed through the double-locked doors of our laboratory.”

The cymbals are made of approximately 80 per cent copper, 19 per cent tin and 1 per cent silver. The exact mixing process and chemical formula which marries the metals together is, of course, the Zildjian secret. When they are mixed in the electric furnaces, they emerge as circular ingots. These are tempered still longer and then hand-hammered into final shape even including the center cup which affects the cymbal’s final tone. It takes about seven years to master the technique of hammering and Zildjian has high regard for experts in his employ. Even so, about one cymbal in ten cracks and is ruined during shaping.

Finally they are shaved in a lathe and polished after which they are annealed 10 or 20 times and then tempered 10 or 12 times. Then they go into the curing vaults. Armand tests each carefully by ear before storing and when a great drummer or cymbal player visits the little factory to buy an instrument, he usually says, “Leave it to Armand.”