This is another one of those things that gets much better and cheaper with a digital camera. This poor guy only got one shot per launch and had to carefully time it so the kite would be at the right hight for the camera to be focused.

Even Google Earth is getting in on the act now. 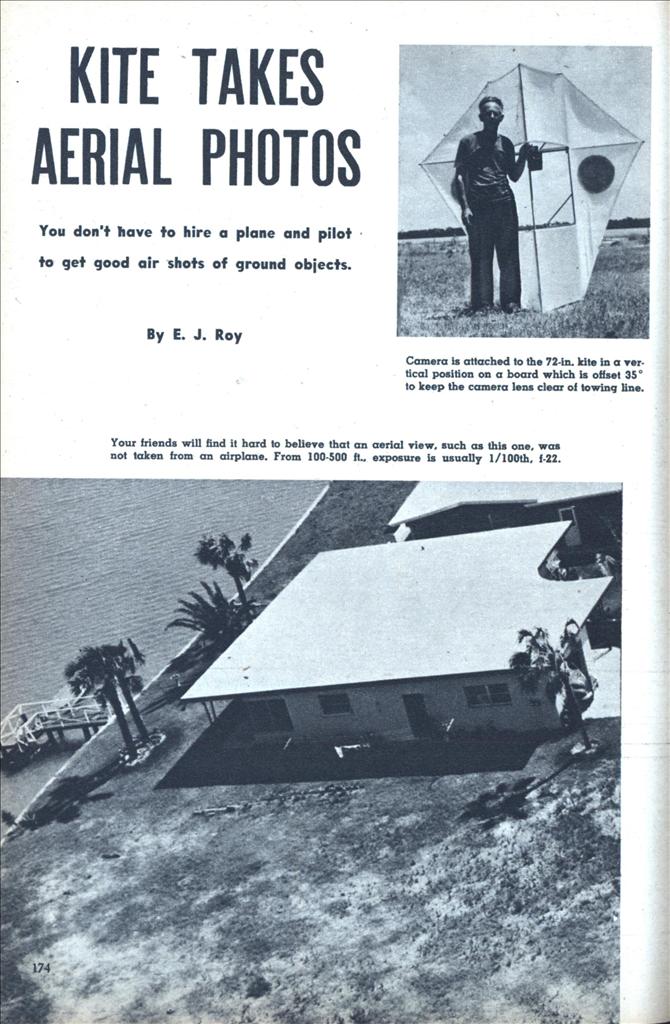 You don’t have to hire a plane and pilot to get good air shots of ground objects.

FOR many years, the idea of making photographs from a kite has been in my mind. This year, I decided to do something about it. First was the kite design, and having had considerable experience with various types of kites, I finally selected a design for a triangular box kite with wings.

The large six foot model flies very steady once it is above the wind eddies near the ground. As a protective measure, I first send up a four foot model, which acts as a sort of pilot and prevents the camera-carrying kite from plunging and swaying. It also provides extra lift and steadiness, once the camera kite is at photographing altitude.

I must stress the excellent flying qualities of this smaller kite. There is nothing like it. A four foot model, with the weight kept down to 12 ounces (balsa and silk), flies with the line near the vertical. This kite is my own design and many people have copied it just for the sheer fun of kite flying. It will stay up as long as the slightest breeze remains.

The six foot camera kite is made with 3/4 x 1/2-in. white pine. Sitka spruce is the best choice, if available. The cross arm is 5/8-in. birch dowling. The relative dimensions are simple—six feet high and six feet wide. The triangular section is 2x2x2 feet and the arms extend two feet on each side. A study of the photo and drawing of the frame work is self-explanatory.

The covering on the large kite is light nylon. The camera I use is a home-made affair, but could be any kind of light camera with a good lens. Mine is a plywood box with film holder or film pack adapter, held in place with rubber bands. A between-the-lens shutter is operated by a small kitchen type spring-driven timer, The little arm which is normally used to strike the bell on this timer was used to release the shutter. The accompanying aerial photos were made with this simple device. The timer is set to release the shutter at exactly six minutes after the kite is launched and is synchronized with my wrist watch.

The camera is secured to the leading edge rail of the kite with one bolt so that it maybe rotated upward or downward to get either a vertical or oblique view as desired. The camera is also mounted so that it points either to the left or to the right of the towing line, thereby avoiding photographing it. It may be mounted either vertically or horizontally. My photos have been made at heights from 100 to 500 feet using a 100mm lens on 2-1/4 x 3-1/4-in. film. Exposure is usually 1/100th of a second at f-22 on Super Pan Press film.

Now, as to the procedure in making a photo: First the lightweight 4-foot kite is sent up to about 200 ft. The small kite may be dispensed with if the wind is steady and at 12 mph or better. I use a strong cotton line with a tensile strength of 65 pounds. The line from the small kite is tied to the center of the cross arm on the camera kite, and with a good wind the four foot kite will lift the large kite, which weighs about 5-1/2 pounds with camera. Now I snap the line to the camera kite, draw the dark slide, set the camera diaphragm and shutter, set the timer, consult my watch and away they go. At about three minutes with a good wind (9 to 12 mph) the camera will be looking at an awful lot of real estate. But, if I want a real aerial shot I keep paying out line till about five minutes have elapsed. Then I just hang on until the crucial moment. If the wind slows down at anytime, the large kite will begin to lose altitude. Reeling in slowly will maintain position. In fact, the kites may be kept aloft in dead air by reeling in at a fair speed. I am surrounded by water and have never had one dunked.

After the kites are up, it is easy to estimate the area being photographed by sighting the angle the lens takes. Corrections can be made by walking the kites to one side or other as desired.

In a 12 mph wind these kites exert a pull of about 15 to 18 pounds. Just try to wind in 500 feet of line with a 15 pound steady pull. The answer of course, is an electric drive on the reel. If I have an assistant he can haul in as I wind, which makes it easy enough. I am certain that serious aerial photography can be done in this simple and economical way, as the photographs shown will attest. Color work would be simply a matter of using color film. In any case, let me state that I got the thrill of my photographic life when I pulled down the kites and developed my first aerial negative, and I know you will, too. •