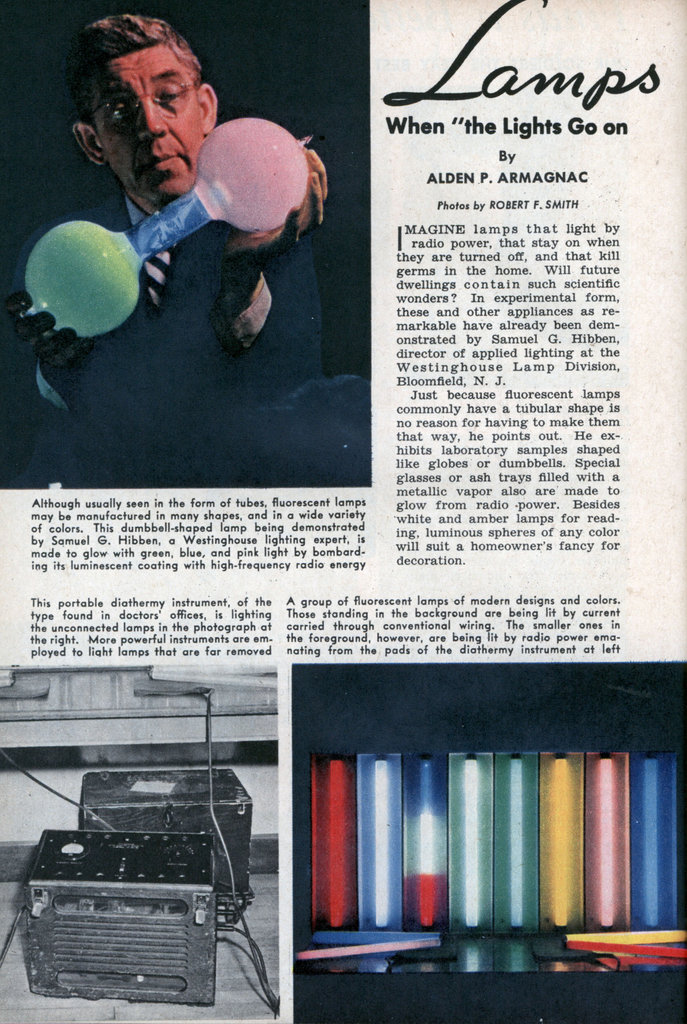 When “the Lights Go on Again” After the War, They Will Be Lit by the Magic of Radio

IMAGINE lamps that light by radio power, that stay on when they are turned off, and that kill germs in the home. Will future dwellings contain such scientific wonders? In experimental form, these and other appliances as remarkable have already been demonstrated by Samuel G. Hibben, director of applied lighting at the Westinghouse Lamp Division, Bloomfield, N. J.

Just because fluorescent lamps commonly have a tubular shape is no reason for having to make them that way, he points out. He exhibits laboratory samples shaped like globes or dumbbells. Special glasses or ash trays filled with a metallic vapor also are made to glow from radio -power. Besides white and amber lamps for reading, luminous spheres of any color will suit a homeowner’s fancy for decoration.

Wiring? That little matter may be ignored, as far as external appearance goes. By way of trial, Hibben suspended a small diathermy machine, which radiates ultrashort radio waves, from the ceiling of his cellar. When he filled a fruit bowl on his dining-room table with fluorescent globes, they lit up to make a rainbow-hued centerpiece. Permanently installed in walls and floors, similar radio equipment could obviate need for certain special light fixtures and outlets, permitting portable lamps to be moved about wherever wanted.

Midget versions of bactericidal lamps used in hospitals, which kill germs with ultraviolet rays, could serve a variety of household purposes. One tiny model would keep baby’s bottles germ-free. Also applicable in preserving, it would offer assurance against spoiled batches. A “shoe-tree” lamp of similar type is said to keep shoes free from the organisms of athlete’s foot.

Certain minerals become brilliantly luminous under black lightâ€”ultraviolet rays from a lamp screened to shut off visible radianceâ€”and night prospectors apply the fact to search for desirable ores (P.S.M., Dec, ’39, p. 104). For home decoration, the minerals may be pulverized and made into enamel for walls, which glow in handsome

hues when illuminated by concealed black-light lamps. An amusing bit of showmanship demonstrates the “lamp that won’t go out.” While Hibben discusses other laboratory developments, he keeps an innocent-looking little bulb burning in a standard screw socket. At length, he calls attention to it, and takes out the bulb. To the observer’s astonishment, it continues to glow as it lies in the palm of his hand. Its secret is a phosphorescent coating, which gives off light for several hours after being activated by the bulb-shaped vapor lamp. In one practical application suggested by the trick, lights of this design could mark fire exits of theaters and other public places, guiding occupants to safety if normal current failed.