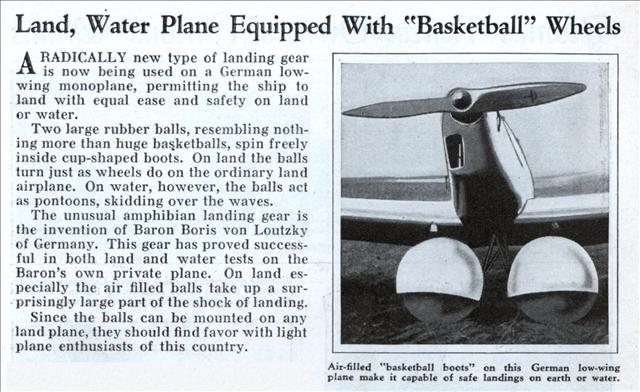 A RADICALLY new type of landing gear is now being used on a German low-wing monoplane, permitting the ship to land with equal ease and safety on land or water.

Two large rubber balls, resembling nothing more than huge basketballs, spin freely inside cup-shaped boots. On land the balls turn just as wheels do on the ordinary land airplane. On water, however, the balls act as pontoons, skidding over the waves.

The unusual amphibian landing gear is the invention of Baron Boris von Loutzky of Germany. This gear has proved successful in both land and water tests on the Baron’s own private plane. On land especially the air filled balls take up a surprisingly large part of the shock of landing.

Since the balls can be mounted on any land plane, they should find favor with light plane enthusiasts of this country.