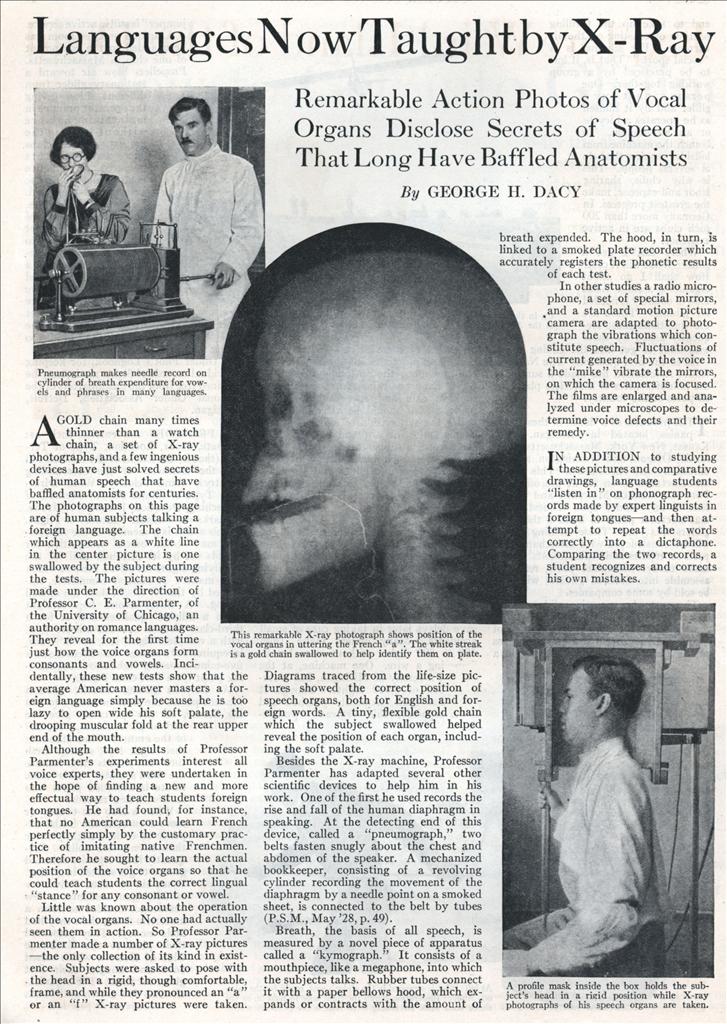 A GOLD chain many times thinner than a watch chain, a set of X-ray photographs, and a few ingenious devices have just solved secrets of human speech that have baffled anatomists for centuries. The photographs on this page are of human subjects talking a foreign language. The chain which appears as a white line in the center picture is one swallowed by the subject during the tests. The pictures were made under the direction of Professor C. E. Parmenter, of the University of Chicago, an authority on romance languages. They reveal for the first time just how the voice organs form consonants and vowels. Incidentally, these new tests show that the average American never masters a foreign language simply because he is too lazy to open wide his soft palate, the drooping muscular fold at the rear upper end of the mouth.

Although the results of Professor Parmenter’s experiments interest all voice experts, they were undertaken in the hope of finding a new and more effectual way to teach students foreign tongues. He had found, for instance, that no American could learn French perfectly simply by the customary practice of imitating native Frenchmen. Therefore he sought to learn the actual position of the voice organs so that he could teach students the correct lingual “stance” for any consonant or vowel.

Little was known about the operation of the vocal organs. No one had actually seen them in action. So Professor Parmenter made a number of X-ray pictures —the only collection of its kind in existence. Subjects were asked to pose with the head in a rigid, though comfortable, frame, and while they pronounced an “a” or an “f” X-ray pictures were taken.

Diagrams traced from the life-size pictures showed the correct position of speech organs, both for English and foreign words. A tiny, flexible gold chain which the subject swallowed helped reveal the position of each organ, including the soft palate.

Besides the X-ray machine, Professor Parmenter has adapted several other scientific devices to help him in his work. One of the first he used records the rise and fall of the human diaphragm in speaking. At the detecting end of this device, called a “pneumograph,” two belts fasten snugly about the chest and abdomen of the speaker. A mechanized bookkeeper, consisting of a revolving cylinder recording the movement of the diaphragm by a needle point on a smoked sheet, is connected to the belt by tubes (P.S.M., May ’28, p. 49).

Breath, the basis of all speech, is measured by a novel piece of apparatus called a “kymograph.” It consists of a mouthpiece, like a megaphone, into which the subjects talks. Rubber tubes connect it with a paper bellows hood, which expands or contracts with the amount of breath expended. The hood, in turn, is linked to a smoked plate recorder which accurately registers the phonetic results of each test.

In other studies a radio microphone, a set of special mirrors, _and a standard motion picture camera are adapted to photograph the vibrations which constitute speech. Fluctuations of current generated by the voice in the “mike” vibrate the mirrors, on which the camera is focused. The films are enlarged and analyzed under microscopes to determine voice defects and their remedy.

IN ADDITION to studying these pictures and comparative drawings, language students “listen in” on phonograph records made by expert linguists in foreign tongues—and then attempt to repeat the words correctly into a dictaphone. Comparing the two records, a student recognizes and corrects his own mistakes.