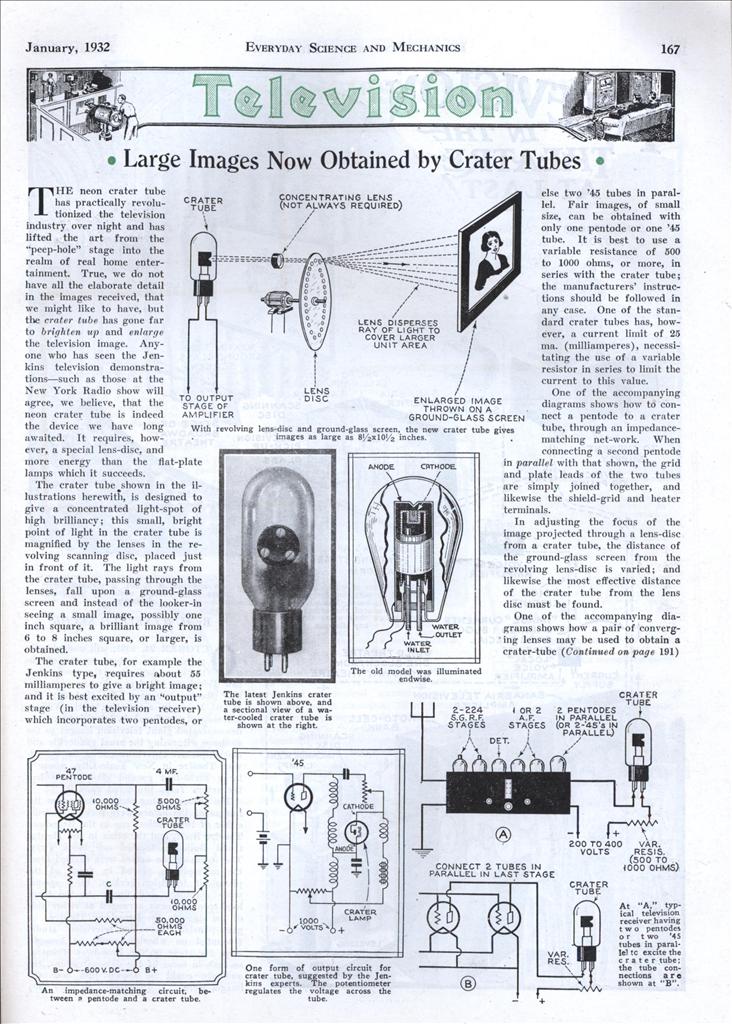 The crater tube shown in the illustrations herewith, is designed to give a concentrated light-spot of high brilliancy; this small, bright point of light in the crater tube is magnified by the lenses in the revolving scanning disc, placed just in front of it. The light rays from the crater tube, passing through the lenses, fall upon a ground-glass screen and instead of the looker-in seeing a small image, possibly one inch square, a brilliant image from 6 to 8 inches square, or larger, is obtained.

The crater tube, for example the Jenkins type, requires about 55 milliamperes to give a bright image; and it is best excited by an “output” stage (in the television receiver) which incorporates two pentodes, or else two ’45 tubes in parallel. Fair images, of small size, can be obtained with only one pentode or one ’45 tube. It is best to use a variable resistance of 500 to 1000 ohms, or more, in series with the crater tube; the manufacturers’ instructions should be followed in any case. One of the standard crater tubes has, however, a current limit of 25 ma. (milliamperes), necessitating the use of a variable resistor in series to limit the current to this value.

One of the accompanying diagrams shows how to connect a pentode to a crater tube, through an impedance-matching net-work. When connecting a second pentode in parallel with that shown, the grid and plate leads of the two tubes are simply joined together, and likewise the shield-grid and heater terminals.

One of the accompanying diagrams shows how a pair of converging lenses may be used to obtain a crater-tube effect from a square-plate neon tube, of the old style; and also how the reverse effect may be obtained by placing a single lens in front of a crater tube, to magnify the area illuminated.

The trick of producing a concentrated light ray, to simulate the crater effect, from an ordinary square-plate neon tube, was suggested by Radio Pictures, Incorporated. To obtain this effect one employs two convex lenses; one lens is placed at a distance from the plate, equal to or slightly less than its focal length; the second lens is placed at some distance from the first. Lenses of three-inch focus and three inches in diameter, placed 24 inches apart, may be used. A diaphragm plate is used to stop down the light beam to the exact shape and size desired. Those interested in crater tubes should read the article by D. E. Replogle in the Nov.-Dec. issue of Television News.