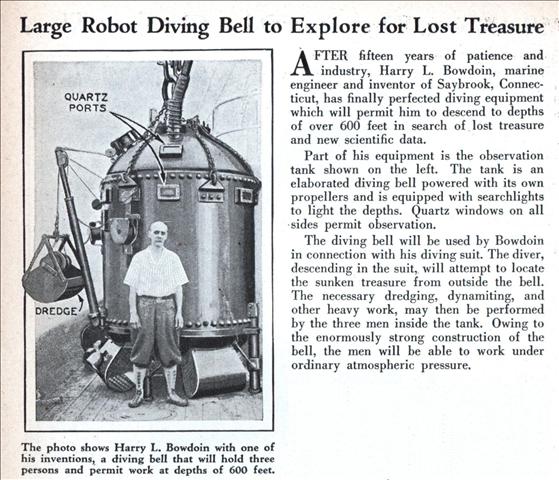 AFTER fifteen years of patience and industry, Harry L. Bowdoin, marine engineer and inventor of Saybrook, Connecticut, has finally perfected diving equipment which will permit him to descend to depths of over 600 feet in search of lost treasure and new scientific data.

Part of his equipment is the observation tank shown on the left. The tank is an elaborated diving bell powered with its own propellers and is equipped with searchlights to light the depths. Quartz windows on all sides permit observation.

The diving bell will be used by Bowdoin in connection with his diving suit. The diver, descending in the suit, will attempt to locate the sunken treasure from outside the bell. The necessary dredging, dynamiting, and other heavy work, may then be performed by the three men inside the tank. Owing to the enormously strong construction of the bell, the men will be able to work under ordinary atmospheric pressure.