Modern Mechanix
Issue: May, 1930
Posted in: Nautical
Tags: giant sized
13 Comments on Largest Diesel Engine in World Has Just Been Completed (May, 1930)

Largest Diesel Engine in World Has Just Been Completed (May, 1930) 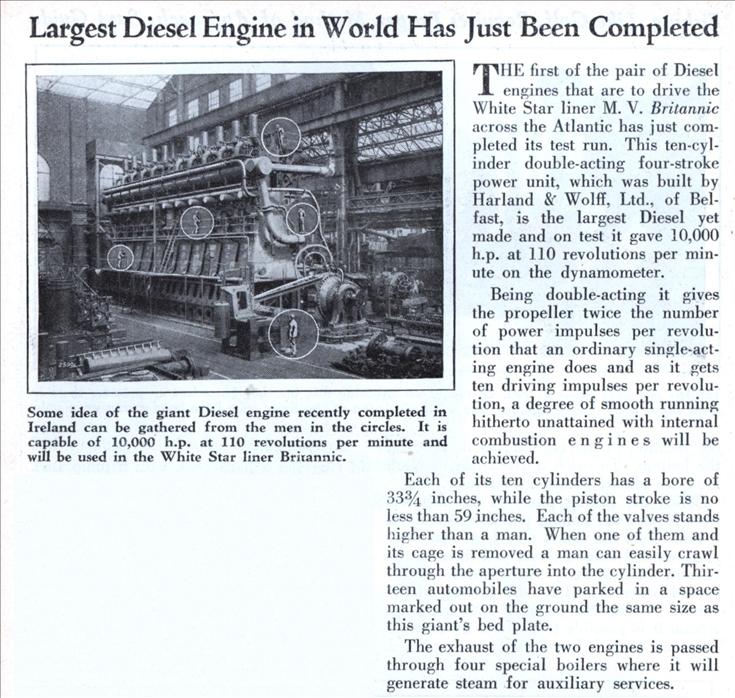 Largest Diesel Engine in World Has Just Been Completed

THE first of the pair of Diesel engines that are to drive the White Star liner M. V. Britannic across the Atlantic has just completed its test run. This ten-cylinder double-acting four-stroke power unit, which was built by Harland & Wolff, Ltd., of Belfast, is the largest Diesel yet made and on test it gave 10,000 h.p. at 110 revolutions per minute on the dynamometer.

Each of its ten cylinders has a bore of 33% inches, while the piston stroke is no less than 59 inches. Each of the valves stands higher than a man. When one of them and its cage is removed a man can easily crawl through the aperture into the cylinder. Thirteen automobiles have parked in a space marked out on the ground the same size as this giant’s bed plate.

The exhaust of the two engines is passed through four special boilers where it will generate steam for auxiliary services.