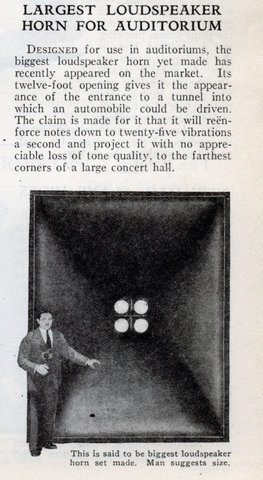 Designed for use in auditoriums, the biggest loudspeaker horn yet made has recently appeared on the market. Its twelve-foot opening gives it the appearance of the entrance to a tunnel into which an automobile could be driven. The claim is made for it that it will reen-force notes down to twenty-five vibrations a second and project it with no appreciable loss of tone quality, to the farthest corners of a large concert hall.