I really wish they had a picture of the girls greasing the pan wearing bacon ice skates. 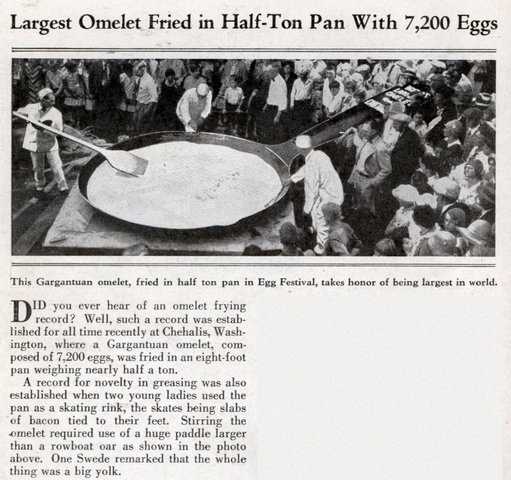 Largest Omelet Fried in Half-Ton Pan With 7,200 Eggs
DID you ever hear of an omelet frying record? Well, such a record was established for all time recently at Chehalis, Washington, where a Gargantuan omelet, composed of 7,200 eggs, was fried in an eight-foot pan weighing nearly half a ton.

A record for novelty in greasing was also established when two young ladies used the pan as a skating rink, the skates being slabs of bacon tied to their feet. Stirring the omelet required use of a huge paddle larger than a rowboat oar as shown in the photo above. One Swede remarked that the whole thing was a big yolk.