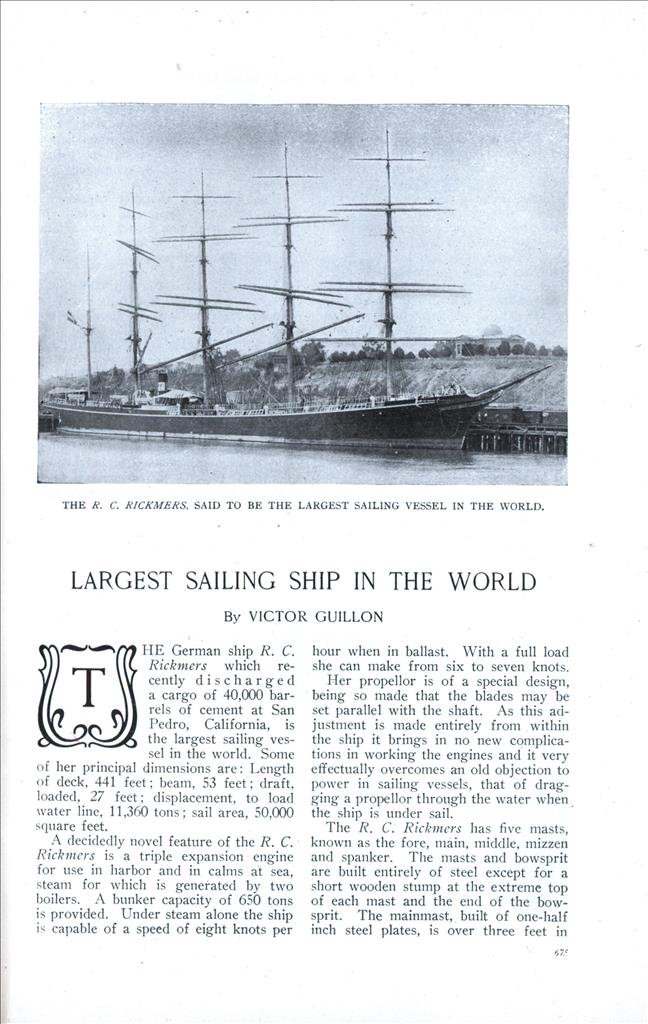 LARGEST SAILING SHIP IN THE WORLD

THE German ship R. C. Rickmers which recently discharged a cargo of 40,000 barrels of cement at San Pedro, California, is the largest sailing vessel in the world. Some of her principal dimensions are: Length of deck, 441 feet; beam, 53 feet; draft, loaded, 27 feet; displacement, to load water line, 11,360 tons; sail area, 50,000 square feet.

A decidedly novel feature of the R. C. Rickmers is a triple expansion engine for use in harbor and in calms at sea, steam for which is generated by two boilers. A bunker capacity of 650 tons is provided. Under steam alone the ship is capable of a speed of eight knots per hour when in ballast. With a full load she can make from six to seven knots.

Her propellor is of a special design, being so made that the blades may be set parallel with the shaft. As this adjustment is made entirely from within the ship it brings in no new complications in working the engines and it very effectually overcomes an old objection to power in sailing vessels, that of dragging a propellor through the water when the ship is under sail.

The R. C. Rickmers has five masts, known as the fore, main, middle, mizzen and spanker. The masts and bowsprit are built entirely of steel except for a short wooden stump at the extreme top of each mast and the end of the bowsprit. The mainmast, built of one-half inch steel plates, is over three feet in diameter at the base and the truck is almost 180 feet from the deck. This mast has fifteen stays on each side, twelve of them steel wires over five inches in diameter and the other three over four inches. Wire rope is used for all the standing rigging and for a large part of the running rigging. Strange as it may seem, the sails are all handled by hand by means of special winches, the only steam winches on board being for handling freight and raising the anchor. This is in contrast with the practice on the coasting vessels, for schooners of half the R. C. Rickmers size use steam almost exclusively for hoisting the larger sails, a donkey-engine for that purpose being situated in the forecastle.

Besides a double steering-wheel over the rudder head the vessel is equipped with a steam-gear and hand wheel forward of the funnel, used in navigating the vessel under steam. There are no less than five compasses scattered about the deck, surely enough to guide even so large as ship as this.

The hull is constructed with a double bottom and the hold is built with four water-tight compartments amidships. These compartments and the double bottom are filled with water when ballast is needed, a much easier and cheaper way than taking in a few thousand tons of sand. The capacity for water-ballast is about 2,700 tons, enough to ballast the ship when she is completely unloaded.

The maximum carrying capacity is eight thousand tons, with a draft of twenty-six feet, nine inches, and a total displacement of 11,360 tons. The weight of the ship itself is about thirty-three hundred tons.

Her cargo on her last trip, which was, by the way, her second, was Portland cement, and it took about three hundred cars to hold it. Three hundred cars would make a train over two miles long and it would take eight engines to pull it.

The practical value of the auxiliary engines is shown by the fact that the passage from Bremen to San Pedro was made in ninty-seven days, remarkably quick time. One hundred and forty days is not unusual and a saving of a month and a half is not to be laughed at.

The R. C. Rickmers is manned by a crew of fifty-two, including the engine-room force. She carries pigs, chickens and a dog as well as the regular complement of ships’ cats. She was built at Hamburg, and flies the German flag.