Wow, RCA seems to have tried out every technology that could possibly compete with VCRs, slapped the SelectaVision name on it and saw if it would sell. Did these ever get released? 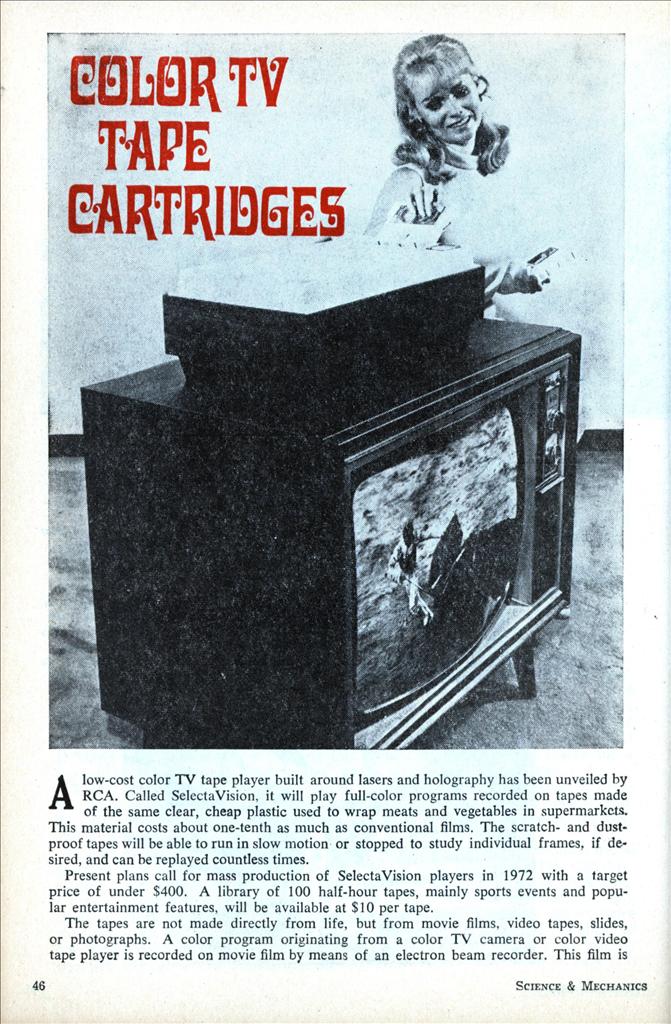 A low-cost color TV tape player built around lasers and holography has been unveiled by RCA. Called SelectaVision, it will play full-color programs recorded on tapes made of the same clear, cheap plastic used to wrap meats and vegetables in supermarkets. This material costs about one-tenth as much as conventional films. The scratch- and dust-proof tapes will be able to run in slow motion or stopped to study individual frames, if desired, and can be replayed countless times.

Present plans call for mass production of SelectaVision players in 1972 with a target price of under $400. A library of 100 half-hour tapes, mainly sports events and popular entertainment features, will be available at $10 per tape.

The tapes are not made directly from life, but from movie films, video tapes, slides, or photographs. A color program originating from a color TV camera or color video tape player is recorded on movie film by means of an electron beam recorder. This film is then developed and converted by a laser to a series of holograms (optical interference patterns) which are recorded on a plastic tape coated with Photoresist, a material that hardens to varying degrees depending on the intensity of the light striking it.

Next: the tape is developed in a chemical solution that eats away the portions of Photoresist not hardened by the laser. The result is a relief map whose hills and valleys represent the original image in coded form. Called the hologram master, this tape is coated with nickel and stripped away, leaving a nickel tape with the holograms impressed on it like engravings. This nickel master is fed through a set of pressure rollers with vinyl tape of similar dimensions to print the final tapes.

Playback of such tape is accomplished by passing a very low-powered laser beam through it into a simple, low-cost TV camera. The camera sees the images reconstructed by laser directly. The playback mechanism, laser, and camera are all housed in the tape deck, which is attached to the antenna terminals of a standard TV set. The system is fully compatible and may be viewed on black-and-white sets, as is presently done with commercial color TV broadcasts