These are really cool. I love the idea of making scale models that you can actually sail around in. 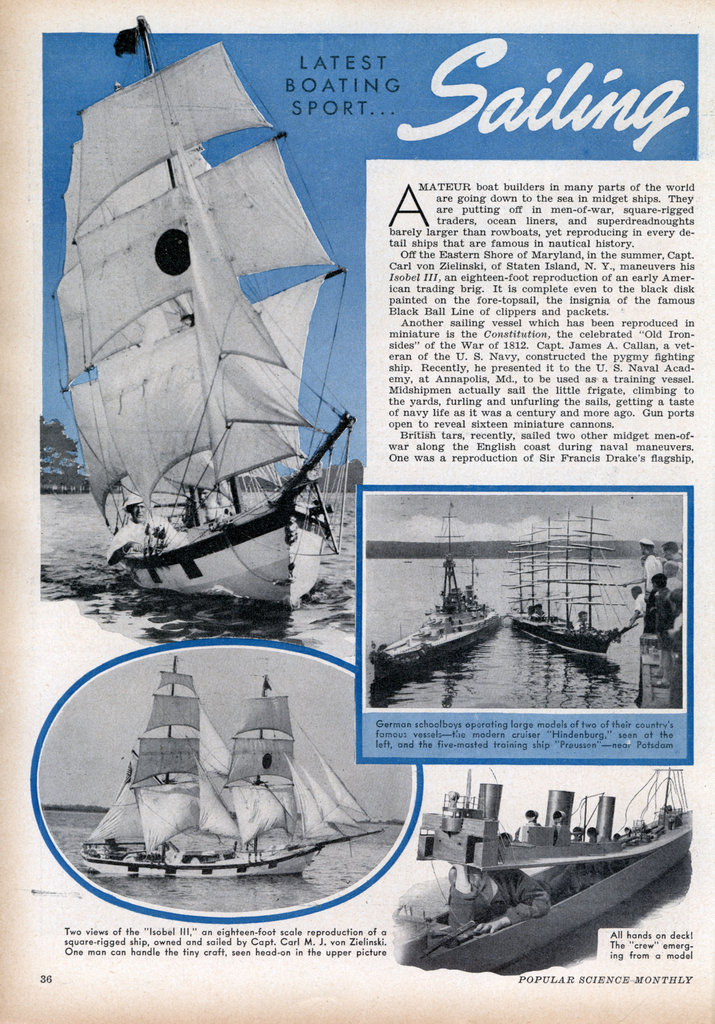 AMATEUR boat builders in many parts of the world are going down to the sea in midget ships. They are putting off in men-of-war, square-rigged traders, ocean liners, and superdreadnoughts barely larger than rowboats, yet reproducing in every detail ships that are famous in nautical history.

Off the Eastern Shore of Maryland, in the summer, Capt. Carl von Zielinski, of Staten Island, N. Y., maneuvers his Isobel III, an eighteen-foot reproduction of an early American trading brig. It is complete even to the black disk painted on the fore-topsail, the insignia of the famous Black Ball Line of clippers and packets.

Another sailing vessel which has been reproduced in miniature is the Constitution, the celebrated “Old Ironsides” of the War of 1812. Capt. James A. Callan, a veteran of the U. S. Navy, constructed the pygmy fighting ship. Recently, he presented it to the U. S. Naval Academy, at Annapolis, Md., to be used as a training vessel. Midshipmen actually sail the little frigate, climbing to the yards, furling and unfurling the sails, getting a taste of navy life as it was a century and more ago. Gun ports open to reveal sixteen miniature cannons.

British tars, recently, sailed two other midget men-of-war along the English coast during naval maneuvers. One was a reproduction of Sir Francis Drake’s flagship, the Golden Hind. The other was Lord Nelson’s famous fighting ship, the Victory. Both vessels were equipped with heavy keels and could fire broadsides from the half-size guns they carried.

In Germany, a group of sea-minded boys, at the Potsdam Boat Construction School, have reproduced in miniature two modern battle cruisers, the Hindenburg and the Konigsberg. On the decks of the former are nearly two dozen guns mounted in revolving turrets. Real searchlights flash signals from the all-steel superstructure. Both of these seaworthy models carry several sailors and make good time under their own power.

Of all the members of the fast-growing midget fleet, the most elaborate is a scale reproduction of the North German Lloyd transatlantic liner Columbus. This model, complete to the last porthole, attracted wide attention not long ago when it was brought to this country on the S. S. Bremen and given a trial run in New York Harbor. During the tests, it attained a speed of ten miles an hour.