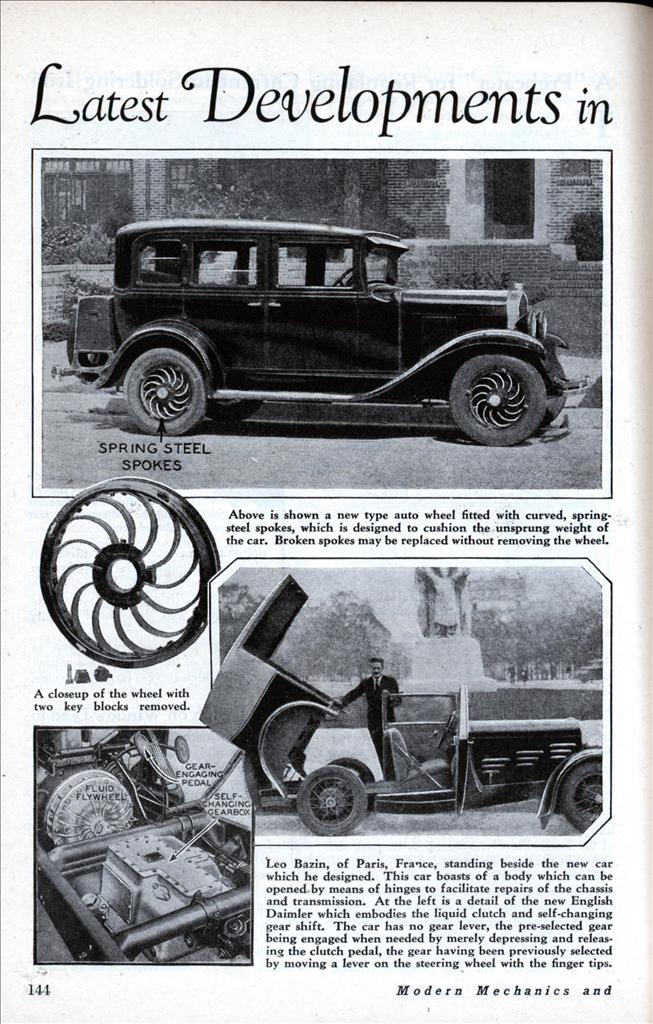 Above is shown a new type auto wheel fitted with curved, spring-steel spokes, which is designed to cushion the unsprung weight of the car. Broken spokes may be replaced without removing the wheel.

Leo Bazin, of Paris, France, standing beside the new car which he designed. This car boasts of a body which can be opened by means of hinges to facilitate repairs of the chassis and transmission. At the left is a detail of the new English Daimler which embodies the liquid clutch and self-changing gear shift. The car has no gear lever, the pre-selected gear being engaged when needed by merely depressing and releasing the clutch pedal, the gear having been previously selected by moving a lever on the steering wheel with the finger tips.

At the top is shown an invention of Professor Grover Van Duyn, of Greenfield, Indiana, for the protection of pupils entering or leaving school busses. The figure appears or disappears by pulling a cord. At the right is shown a rubberized splasher to protect the paint-work.

Eight speeds forward, four reverse, no frame, five axles and four driving wheels are unusual features of the Tatra-Car, an auto built in Czecho-Slovakia. Driven with a four-cylinder, double-opposed, air-cooled engine, the car has been driven over rough ground at a speed of over forty miles an hour.