Honestly, I’m not that interested most agricultural articles, but that picture on the second page is way too good not to post. 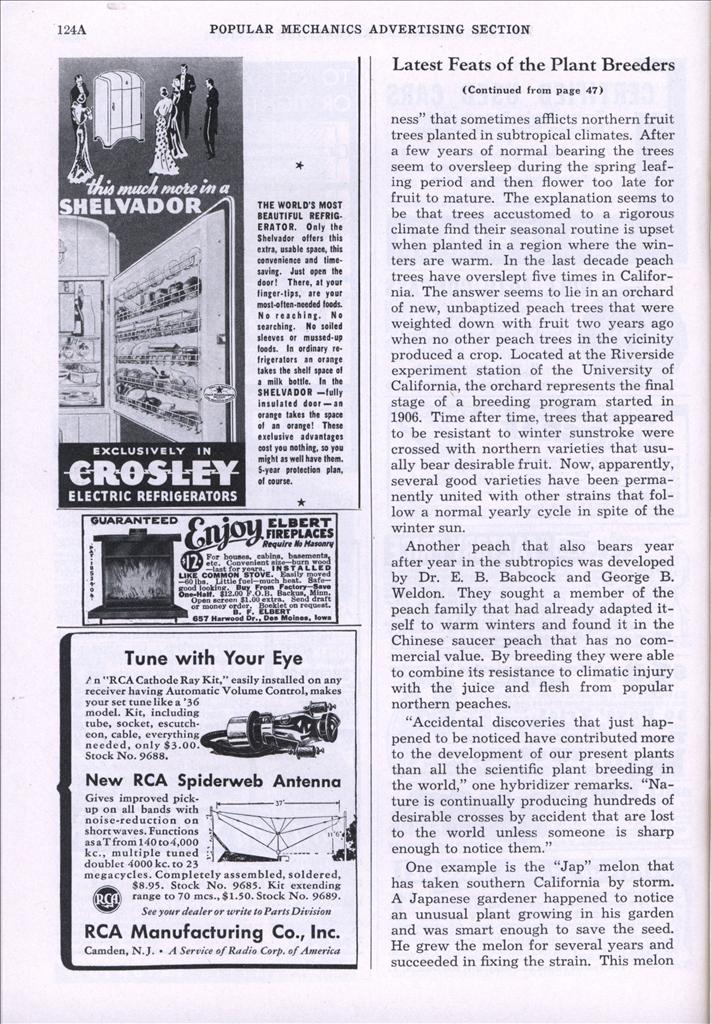 Latest FEATS of the PLANT BREEDERS

TWENTY-FIVE per cent of the vegetables and annual fruits we eat were unknown ten years ago, says an agricultural authority.

Of course, he adds, common vegetables like peas and potatoes still look the same but we are now using improved strains that didn’t exist a decade past. Scientific plant breeding is continually creating new varieties of commercial plants that are larger, better flavored, more resistant to disease, or more desirable in other ways.

Few who buy ordinary cantaloupes in season, for example, know that the melons they get today are a brand new strain. Ten years ago cantaloupes were afflicted periodically by a mildew that caused the meat to resemble that of a leathery cucumber. Then a plant scientist discovered a relative of the melon family in India that was practically useless except for a strong resistance to mildew. As a result of a long breeding program this quality was joined with all the desirable features of the old cantaloupe in a new strain of fruit. Today the melons are as tasty as ever and also highly resistant to mildew blight. Today, also, we have tomatoes that resist nearly all the old diseases. New lettuce varieties escape the slime and wilt diseases that were periodic menaces, and even a threat to the green onion industry has been eliminated by developing an onion that produces leaves instead of rolled stalks above ground, thus removing the hiding place of parasitic insects. Another innovation is corn that grows on small thin cobs, enabling “corn on the cob” to be marketed in tin cans.

Improvements like these are the achievements of genetics. Meanwhile the hybridizers have created a startling array of new plants that no one ever dreamed about before. Things like the garlion that is a cross between the garlic and the onion, the topeppo that combines the tomato and the pepper, the odorless onion and odorless cabbage, and the lemon cucumber that grows on a vine but looks like a lemon, are all new vegetables. Yard-long string beans are on the market, a coreless carrot is available, and stringless, better flavored “Utah” celery grows in the west.

A new seedless grape with a muscat flavor ripens in July instead of in October. The new boysenberry may replace the loganberry in popularity. Developed by Rudolph Boysen in California, it is a cross between the loganberry, raspberry and blackberry. It is a prolific producer and has a larger, sweeter fruit than other berries. One test plot of one-tenth acre produced 2,200 baskets of fruit from 100 vines.

A lemon tree whose branches yield a lemon extract is reported from Russia, a freak hardly more astonishing than the distinctive juices that resemble punches and soft drinks of several new orange varieties. These have been grown by the citrus experiment station of the University of California. The purpose was not to create new fruit flavors, but to produce varieties that would flourish in different kinds of soil and to combine strong tree growths with desirable types of fruit. The citrange and the tangelo, the first a hybrid resembling a grapefruit and the second a cross between the tangarine and the grapefruit, are two unusual types gradually being planted commercially.

New kinds and strains of flowers in whole rainbows of colors are being produced. At one recent flower show, more than 250 varieties of chrysanthemums alone were exhibited, as well as new strains of orchids, dahlias, and roses. Dozens of nurserymen are working on roses alone, seeking new shades and bi-colors, longer buds, and better stems. Plant breeding is tedious work, and in 20,000 attempts, only a dozen or so new varieties may be obtained. A new yellow petunia developed by John Bodger was produced only after ten years of work.

“The future possibilities in genetic experiments are practically limitless,” one research worker says. He declares that practically any desired characteristic within reason can be produced in any plant, although a particular objective may require many years to reach. In a “scientific Garden of Eden” maintained by the University of California the work of improving present types of plants, especially common vegetables and flowers, is being conducted along several lines. Resistance to mildew in delphiniums and zinnias is being sought and a breeding program is being carried on to remove the tendency toward wilt in watermelon vines. Elimination of the mosaic disease in celery and spinach is also being sought. A new variety of corn that resists earworm also may be developed. One department of the farm is seeking to transfer the double blossom of the Golden Gleam nasturtium to the other color varieties of the flower. Most of the work is being conducted along lines followed by Prof. S. L. Emsweller when he created a rust-free strain of snapdragon after that disease had affected flowers in all parts of the country. After a long search. Prof. Emsweller found several snapdragon plants in Indiana that appeared to resist the disease although other plants of the same strain in the same garden were suffering from it. These resistant plants were grown together for several generations until, by crossbreeding, several plants were produced that were entirely free from rust. These in turn were self-pollinated for several years and then carefully crossed with a few commercial varieties. A few years later various strains of snapdragon all free from susceptibility to rust were produced.

Right now an unusual hunt is being conducted among the avocado orchards of the southwest for a few special trees. The avocado, practically unknown in the United States fifteen years ago, produces good crops only occasionally. If a way could be found to make every year a bumper year, the avocado industry could be raised to a commercial plane similar to that of the stabilized citrus industry. Variations in seasonal temperatures seem to determine the size of the crop and orchardists are hoping for a new strain of trees that will bear prolifically no matter whether a winter is mild or cold. The first step is to locate a few trees that seem to bear regularly in spite of winter temperatures. The chances are that these trees will have small fruit, and the next step will be to cross the variety with other trees that produce better fruit.

Another puzzle scientific plant breeders are solving is the strange “sleeping sick- It takes plenty of nerve to paint the small suspender cables on the San Francisco-Oakland bay bridge, which is fast nearing completion. The suspender ropes extend down from the main bridge cables to the steel work. Painters, working from boatswains’ chairs, hang high above the bridge, slowly covering the cables with coats of aluminum paint. A false move means almost certain death for these men, but it’s a part of the job and they think nothing of the danger.

Honey production may be increased by sowing clover of different blooming habits so part of the field is always in flower.

ness” that sometimes afflicts northern fruit trees planted in subtropical climates. After a few years of normal bearing the trees seem to oversleep during the spring leafing period and then flower too late for fruit to mature. The explanation seems to be that trees accustomed to a rigorous climate find their seasonal routine is upset when planted in a region where the winters are warm. In the last decade peach trees have overslept five times in California. The answer seems to lie in an orchard of new, unbaptized peach trees that were weighted down with fruit two years ago when no other peach trees in the vicinity produced a crop. Located at the Riverside experiment station of the University of California, the orchard represents the final stage of a breeding program started in 1906. Time after time, trees that appeared to be resistant to winter sunstroke were crossed with northern varieties that usually bear desirable fruit. Now, apparently, several good varieties have been permanently united with other strains that follow a normal yearly cycle in spite of the winter sun.

Another peach that also bears year after year in the subtropics was developed by Dr. E. B. Babcock and George B. Weldon. They sought a member of the peach family that had already adapted itself to warm winters and found it in the Chinese saucer peach that has no commercial value. By breeding they were able to combine its resistance to climatic injury with the juice and flesh from popular northern peaches.

“Accidental discoveries that just happened to be noticed have contributed more to the development of our present plants than all the scientific plant breeding in the world,” one hybridizer remarks. “Nature is continually producing hundreds of desirable crosses by accident that are lost to the world unless someone is sharp enough to notice them.”, One example is the “Jap” melon that has taken southern California by storm. A Japanese gardener happened to notice an unusual plant growing in his garden and was smart enough to save the seed. He grew the melon for several years and succeeded in fixing the strain. This melon has a smooth, yellow rind, is much larger than a cantaloupe, and has delicious, salmon-colored meat.

Burbank’s work did not end with his death in 1926, since hundreds of experimental trees were still growing in his California test orchards. His work was continued by the Stark Brothers of Missouri and in the last few years a number of new varieties of cherries, peaches, plums as big as apples, and other fruit that originated with Burbank have been placed on the market. Some new varieties have been patented and each is an improvement in size or flavor over earlier strains. Among them are the “peacherine” that combines the yellow peach and the white nectarine, and the famous “lost nectarine” that was lost for a time after its first discovery.

Most of the plant patents, about 150, that have been issued since 1930 cover new varieties of flowers. One recent patent protects an astonishing nasturtium of a super-double hybrid type that flowers with sixty petals instead of the usual five. Other plant patents have been issued for improved mushrooms, fruits, and nuts. Inventors usually sell or assign their patents to commercial nurseries for future development.

Plant breeding is slow work but small fortunes are often the reward for discovering and stabilizing some new variety of popular plant. The greatest chance for amateur plant breeders, professionals believe, lies in the field of annual crops and flowers. Progress is most rapid in these plants since new seed representing a new generation is produced each year.

Fifty years from now, plant breeders think, every climatic zone will have a much wider variety of plants than now, due to the creation of new varieties that will flourish when transplanted away from their natural homes. The late Ivan Michorin, the “Burbank of Russia,” introduced raspberries, apricots, cherries, and other temperate zone plants to the lower latitudes of Siberia and succeeded in crossbreeding his plants both geographically and botanically, combining temperate-zone fruits with stock that was native to the hardy north. Horticulturists look forward to the time when by similar breeding programs tropical fruits will be grown successfully in most parts of the United States.