Latest in Firearms—a Rifle That Shoots With Liquid Gas (Aug, 1931) 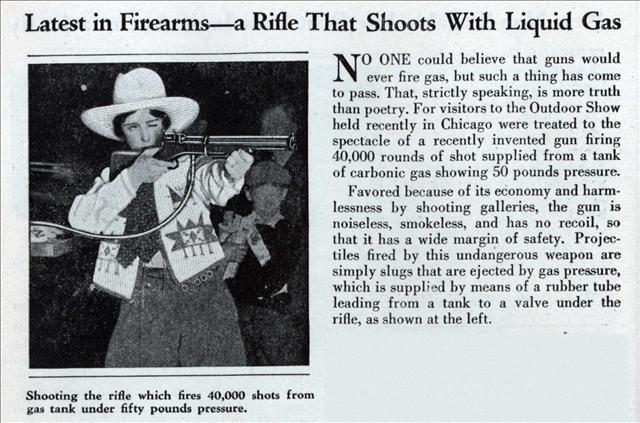 Latest in Firearms—a Rifle That Shoots With Liquid Gas
NO ONE could believe that guns would ever fire gas, but such a thing has come to pass. That, strictly speaking, is more truth than poetry. For visitors to the Outdoor Show held recently in Chicago were treated to the spectacle of a recently invented gun firing 40,000 rounds of shot supplied from a tank of carbonic gas showing 50 pounds pressure. Favored because of its economy and harmlessness by shooting galleries, the gun is noiseless, smokeless, and has no recoil, so that it has a wide margin of safety. Projectiles fired by this undangerous weapon are simply slugs that are ejected by gas pressure, which is supplied by means of a rubber tube leading from a tank to a valve under the rifle, as shown at the left.