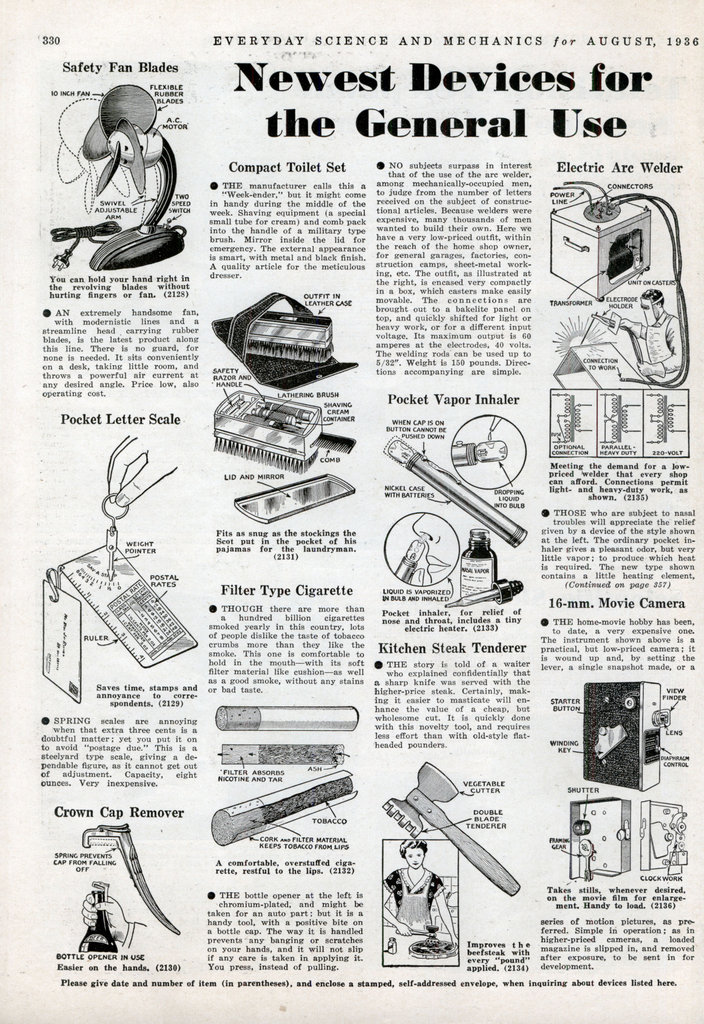 TO eliminate unsanitary drinking out of a bottle, this patent provides for liquors in 1-ounce individual containers which can be drunk out of and discarded. A pocketful of them can be carried in a box, and an assortment provided.

Fountain Tobacco Pipe
DEVOTEES of large pipes will like this, with a stem holding a quantity of tobacco. When the bowl is smoked out, and emptied, it is depressed into the base, and a fresh charge allowed to flow in, from the stem.

Machine for Bridge Hand Study
THERE are, at the present time, nearly as many bridge devotees as the number of eye-wash patrons which caused Col. Sellers to cry: “There’s millions in it!” The invention at the left is intended to appeal to the “doublo-dummy” player who likes to work out play with the four hands before him. It is so arranged that it is not necessary to disturb the cards, if he desires to follow out several lines of strategy; he simply notes the order of the tricks. It also is adapted to a service, or method of instruction, where printed sample hands are sent out, to be inserted over the rollers of the machine; these may be studied at leisure, in accordance with instructions. By having one set of hands on one endlss paper web, for one pair of rollers; and the opposite hands on another, “duplicate” play could be carried out; first using the same hands for “North and South,” and then for “East and West.”

Floating Toy for Tub Use
CHILDREN whose mothers do not mind a little splashing â€” or in shallow water outdoorsâ€”will find the invention below very intriguing, in one or many of its forms. Briefly, it is a cylinder open and weighted at the bottom a tiny hole at the top allows escape of air when it is placed in the water, until it finally sinks. The air blast may be used to blow bubbles, or a whistle, or to spin a fan. When it sinks, of course, it is simply fished up, drained of water and set in the tub again.

Thermometer in Spoon Bowl
AN interesting example of combining old units to form a new and useful application is seen above. The inventor was struck by the number of times it is desirable to know the temperature of a liquidâ€”as for instance, a baby’s food. He provides a thermometer of suitable range whose tube is blown into a spoon, which may be used to stir a liquid, whose temperature it indicates; or to take up a small sample. A higher range can be used for candy making, or frying.

Flexible Milk Bottle Cap
WHEN milk freezes, it expands, and out comes the cap. The patent at the right overcomes this by making a cap that will yield without letting go.

Musical Instrument for Rustic Orchestra
“An irregular, yet practicable stringed instrument which, though of a limited tone compass, is nevertheless usable in the hands of an artist, to promote achievement, not of a renowned type, but rather of a captivating and humorous character calculated to appeal to a listener moved by the efforts of a humble performer” is the way the inventor describes the musical novelty at the left. Its construction is self-explanatory. Another version, we fancy, could be a mountaineer with his squirrel rifle.

Tuned Sign Standard Oscillator
IN our textbooks, we find radio circuits compared to a spring and weight. The circuit oscillates at a frequency regulated by its electrical capacity and its inductance; the spring and weight will find a natural frequency depending on the weight and elasticity in the combination. An electrical engineer, Theodore M. Edison, has patented a mechanically tuned combination, principally for use in advertising. It constitutes a number of springs and weights, so selected that, when they are set vibrating, the oscillations balance out and one element stands perfectly still with all the rest in motion about it, attracting the eye of the beholder. Careful calculation, and fine tuning, are necessary but, once set in motion, it should continue. An electrical circuit, also tuned, supplies the necessary energy to keep the motion of the system from dying down; this is concealed, of course, adding to the mystery. It may be said that, with radio of high frequency, it is possible to produce in a wire, tuned by its own physical dimensions, the not altogether dissimilar electrical effect called a “standing wave” ; so that a voltage will remain constant at one point, while current is racing up and down the wire.