I’m not really sure how any of these qualify as “scientific”. 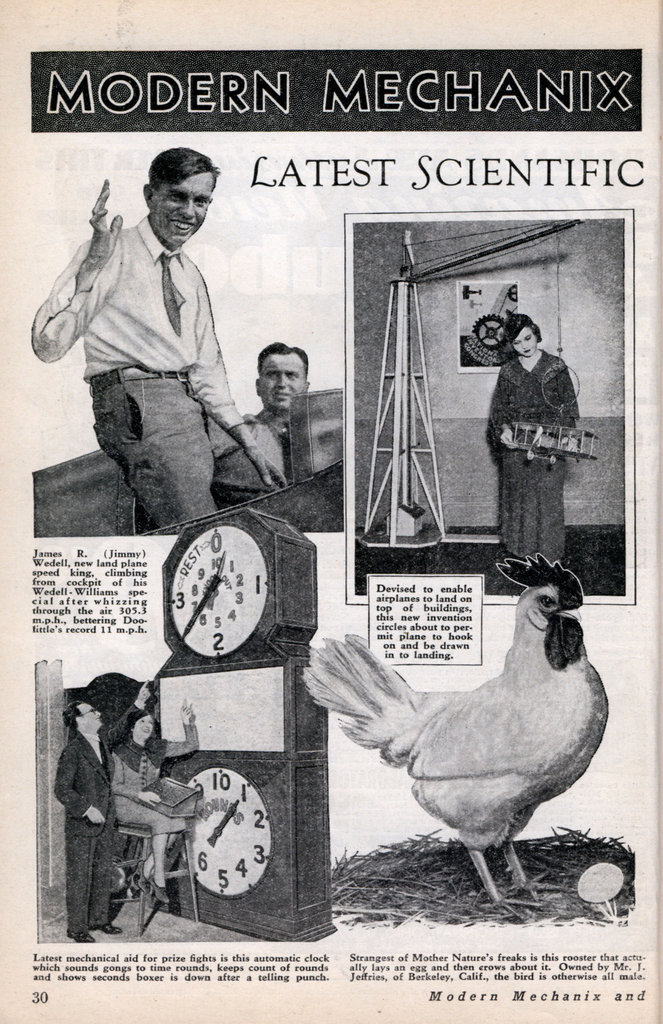 Modern Mechanix and Inventions news cameraman photographs scientific developments from every angle. Two outstanding shots this month are: Jimmy Wedell snatching plane speed crown from head of Doolittle, and a rooster that lays an egg.

Latest mechanical aid for prize fights is this automatic clock which sounds gongs to time rounds, keeps count of rounds and shows seconds boxer is down after a telling punch.

Strangest of Mother Nature’s freaks is this rooster that actually lays an egg and then crows about it. Owned by Mr. J. Jeffries, of Berkeley, Calif., the bird is otherwise all male.

Devised to enable airplanes to land on top of buildings, this new invention circles about to permit plane to hook on and be drawn in to landing.

This “Golf Club of the Future,” has a driver on one end and a spoon on the other; cures hooks and slices.

Inflation hits ping-pong. Mere a bevy of bathing beauties are wielding overgrown paddles to swat an oversize ball in
a spirited game on top of the famous ship cafe at Venice, California. The floor dimensions and net are enlarged in proportion to paddles and ball.

Marooned on an inaccessible ledge in Watkins Glen State Park, N. Y., where it was chased by dogs, this buck deer attracted nation-wide attention by scorning all devices to lure it to safety for over eight full days. Finally it picked its way down the cliff and galloped away.